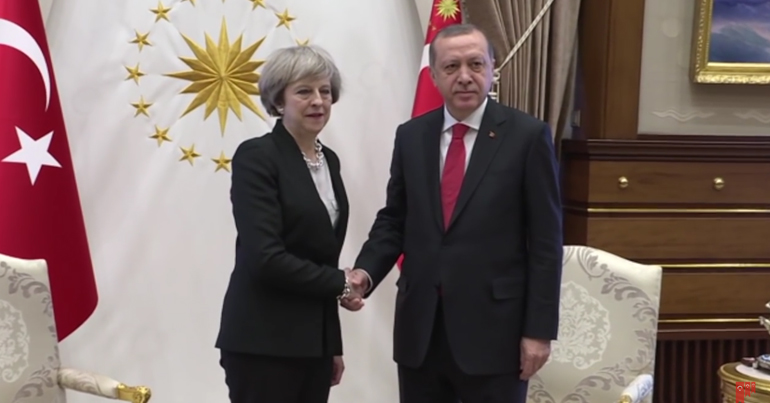 The Syrian conflict is incredibly complex. But one thing is clear – Turkey has been a main player in the ongoing war. And that’s why the prize for biggest Syria bullshit so far goes to Turkish president Recep Tayyip Erdoğan.

On 12 April, the Turkish presidency put out the following tweet without the slightest hint of irony:

President Erdoğan: “No one has the right to engulf the Mediterranean and the Syrian lands in the fire of their political and military power struggles.” pic.twitter.com/P5Cnx3gpYh

Many people have highlighted the ridiculousness of this propaganda:

Says the man that invaded Syria, funded jihadists, shot down a Russian plane, killed US and UK YPG volunteers.
Your country is a mess. Youve arrested anyone that disagrees with you.

Youre a lunatic, a jihadist in a suit. Disappear evil little man, Syria would be better for it! https://t.co/DMO1vTRYAS

So how exactly has Turkey ‘engulfed’ Syria ‘in the fire of its political and military power struggle’?

As the BBC has noted, Turkey has been a key part of Syria’s ongoing war:

Turkey is a key supporter of the Syrian opposition…

its policy of allowing rebel fighters, arms shipments and refugees to pass through its territory has been exploited by foreign jihadists wanting to join IS [Daesh].

And as the Century Foundation thinktank wrote in late 2017:

Weapons had begun trickling into Syria as early as 2011, through backdoor channels organized by Islamist networks, smugglers, merchants, and Bedouin clans, but also with increasingly overt support from Turkey, Qatar, and Saudi Arabia…

In early 2015, the Gulf States and Turkey sent a stream of no-questions-asked ammunition crates into northern Syria, alongside quality anti-tank rockets released by the United States.

In fact, Daesh (Isis/Isil) commanders previously spoke about relying on “full cooperation with the Turks”. Jihadis reportedly had safe houses in southern Turkey where they stayed before crossing into Syria. There was [paywall] also a “porous” border, through which a “steady stream [paywall]” of jihadis went into Syria. And Turkey consistently failed to cut off Daesh supply lines.

Columbia University’s David L Phillips has been outlining the alleged ties between Turkey’s government and Daesh-style jihadis for years.

An overview of Syria’s complex war

Looking at the stages of Syria’s conflict, meanwhile, is essential for understanding the way forward:

In short, Turkish involvement has been a given at every stage of Syria’s conflict. So when Erdoğan says “No one has the right to engulf the Mediterranean and the Syrian lands in the fire of their political and military power struggles”, we can only assume he means ‘no one, apart from us’.

Rather than bombing Syria, how about…

As many people have pointed out, one of the big steps Britain could take to reduce the horrific bloodshed in Syria would be to cut off the arms supply. Because this conflict (and others) has very much been fuelled by the arms trade:

Britain is now the second biggest arms dealer in the world. Two-thirds of UK weapons have been sold to Middle Eastern countries since 2010.

Just in case you hear any platitudes today about peace, stability and human rights…. pic.twitter.com/TMU1siIlTW

Turkey kills Kurds and Theresa May instead of declaring war against Turkey, sees this as an opportunity for arms sales. Indeed a British woman was recently killed by a British bomb dropped by Turkish forces! https://t.co/8NNLEsguQZ

In addition to stopping the arms trade, Britain could also put its efforts into supporting positive forces rather than launching a new military intervention. And the YPG/YPJ-defended territories in northern Syria (Rojava) would be a good place to start. As Labour peer Maurice Glasman said recently after visiting the area:

There is a real democracy in Rojava on a very local level, and then there are various structures that women play an active role. It’s a 50 percent women leadership… There really is equal participation of men and women…

They’re all participating together to build a democratic, self-governing society

How wonderful is this!
Can the Kurds defeat ISIS & help build a secular, democratic Syria?
YES THEY CAN!
The western world needs to back the multi-ethnic & multi-faith peoples of N.Syria. They aspire to something great, its our job to support them!@brett_mcgurk @realDonaldTrump pic.twitter.com/RhX10ddt0P

The Syrian conflict is both horrific and complex. But we have a clear choice. Rather than fuelling further destruction, we have a real chance to fuel the construction of something positive. And it’s a chance we should take with both hands.

– Write to Theresa May and your MP. Ask them to urge Turkey to stop its invasion of northern Syria, to resume peace talks with its internal opponents, and to release all political prisoners. Until that happens, ask them to cancel and stop approving arms sales to Turkey, and support Campaign Against Arms Trade to help make that happen.

– Read more Canary articles on Turkey. Also watch our recent interviews with people who have witnessed the current situation in Turkey and northern Syria first hand.