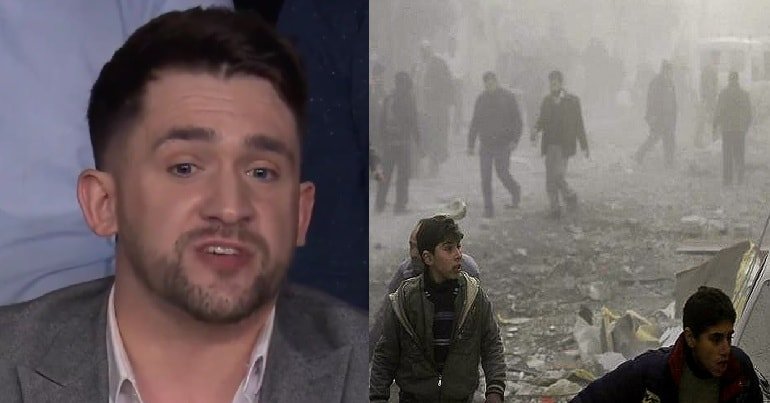 An audience member called time on warmongers on the 12 April edition of BBC Question Time. The intervention comes after the Conservative cabinet backed Theresa May’s call for action against the Syrian government. The US and the UK blame the regime of Bashar al-Assad for a chemical attack on the Syrian city of Douma. Dozens of people reportedly died.

“We’re not going to fall for it again”

To widespread applause in Liverpool, the audience member said:

We were lied to about the weapons of mass destruction, about Saddam Hussein, and we’re not going to fall for it again. The people of this country are too wise to this now.

''The people of this country are too wise to this now''

This audience member says that the public are wary of the reasons given by the government for taking military action #bbcqt pic.twitter.com/prjuAmqI9V

The Liverpool resident pointed out that the political class appeared to blame Assad on impulse:

In this country, we pride ourselves on our law and legal system, which presumes innocence until proven guilty. Before investigators had even got on the ground in Syria, you were already saying it was Assad.

The establishment leapt to blame Assad. But rebel forces in Syria may well have chemical weapons too. For example, Saudi-backed opposition group Jaish al-Islam (or ‘Army of Islam’) controlled Douma until a deal was announced on 8 April. And that same rebel group appeared to use chlorine gases on Kurdish-led forces in 2016.

On BBC Question Time, the audience member also drew attention to how serious this matter is:

Over 1.3 million people died as a result of the war in Afghanistan and Iraq. We need to think carefully about this before we take action.

War caused over a million deaths in Iraq and 220,000 in Afghanistan. That’s the “conservative estimate” of the Nobel Prize-winning International Physicians for the Prevention of Nuclear War and other groups.

Speaking truth to power, the Question Time participant seems to be right on the money. Less than a quarter of the public support military action against Syria, according to YouGov. We need to tell May and the Conservatives loudly and clearly: not in our name.

– Write to Theresa May and your MP to demand she doesn’t take Britain to war.