Before Theresa May starts shaking the magic money tree, consider the costs of war - The Canary 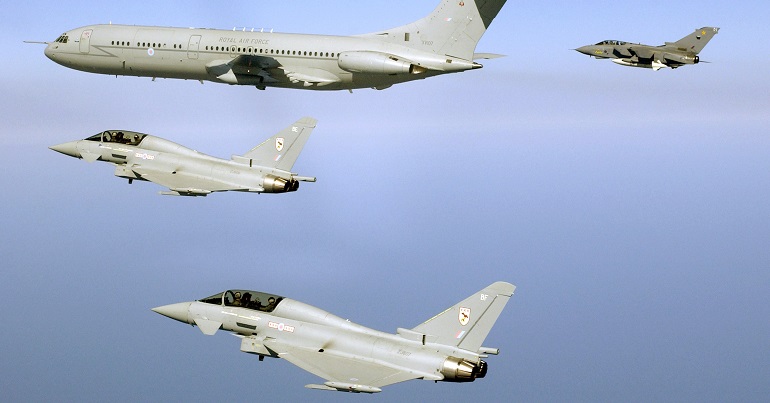 In the days since Theresa May denounced the use of chemical weapons in Douma, threats of military intervention against Syria have loomed. May called an urgent cabinet meeting to discuss military options. The cabinet agreed on the need to take urgent action to punish Syria for the use of chemical weapons against civilians. MPs cautioned May against military intervention without consulting parliament. Some are questioning whether May needs to consult parliament before ordering airstrikes against another nation. Others are questioning whether such action would be illegal under international law.

Jeremy Corbyn has called for a parliamentary debate and vote before any military action against Syria. The prime minister has delayed a decision until consulting with the US and France.

The United Nations is at an impasse on this issue, with the US and Russia in opposition. Russia claims the chemical weapons attack at Douma was staged.

Many people are concerned about the possibility of conflict with Russia over Syria. We have seen a growing public opposition to war in Syria. A YouGov poll shows less than a quarter of British people polled support military strikes against Syria.

There are legitimate moral concerns with escalating the conflict, given that civilians and children are likely to suffer the consequences of further bombing. Human Rights Watch has reported that, by 2017, the human cost of the Syrian conflict was already half a million dead and millions of refugees. Syria is undergoing a massive humanitarian crisis. We need to consider the human cost of further military intervention.

There are also serious concerns over any evidence about who is really responsible for the latest use of chemical weapons in Syria. Yet the United Nations has documented 33 chemical weapon attacks in Syria and blames the Syrian government forces for 27 of these attacks.

There’s also the question of the financial cost of further escalation.

Already a great deal of money has been spent on military interventions in Syria. Since 2014, the government has spent over £1.75bn on airstrikes in Syria.

According to evidence presented to Parliament in 2011, each Tornado flight costs around £35,000 per hour. The cost of flying the UK’s armed aircraft (Tornado, Typhoon, and Reaper) for more than 42,000 hours is almost £1.5bn.

Weapons worth a total of over £268m have been dropped on Syria in the last 4 years by the UK. This is more than the £230m the UK government has spent on humanitarian aid to Iraq over the last 4 years. Though it pales in comparison with the £8.2bn the UK spent between 2002-10 on the military intervention in Iraq.

In addition, the National Audit Office has estimated that the cost of housing and settling Syrian refugees in the UK will be over £1bn by 2020.

No money for British public sector…. plenty of money for war in Syria!

What happened to May’s concern with the deficit? Only last year in June 2017, May defended the need for continued austerity. When Corbyn challenged her about public sector pay freezes, she warned that public spending would lead to a ‘Greek-style’ economic collapse. It seems that May’s concern with public spending does not apply to military expenditure. It seems to only apply to the public sector.

Back in December 2015, James Melville tweeted that one Shadow Storm missile could house the London homeless at Christmas. And JeremyCorbynNews responded with a list of public sector employees who could be paid for the cost of an airstrike (at £22,000 per Paveway bomb).

Here we are 28 months later saying the same thing. It’s a question of priorities given the additional cuts to the public sector and continued wage freezes that have happened during those 28 months.