As the bombs fall on Syria, one company's share price reaches a record high - Canary 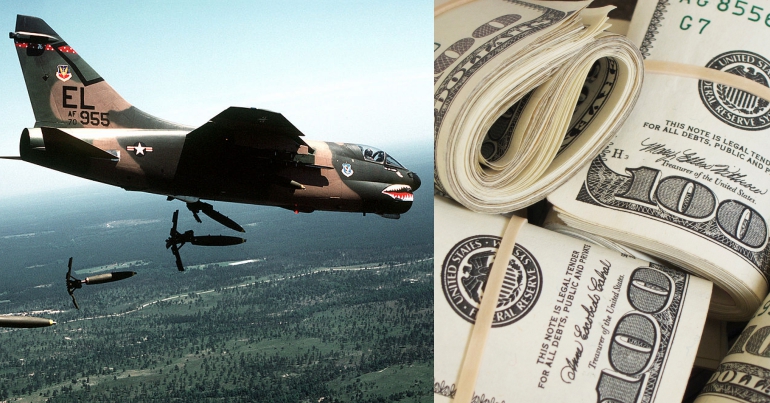 On 14 April, the UK, France and the US bombed Syria. But one company, in particular, seems to be doing very well amid the conflict. And that company, Raytheon, is one of the world’s largest arms companies. It’s the one that manufactured the bombs Donald Trump used to attack Syria in 2017.

Raytheon’s share price hit an at least 20-year record high on 13 April, as the conflict intensified: 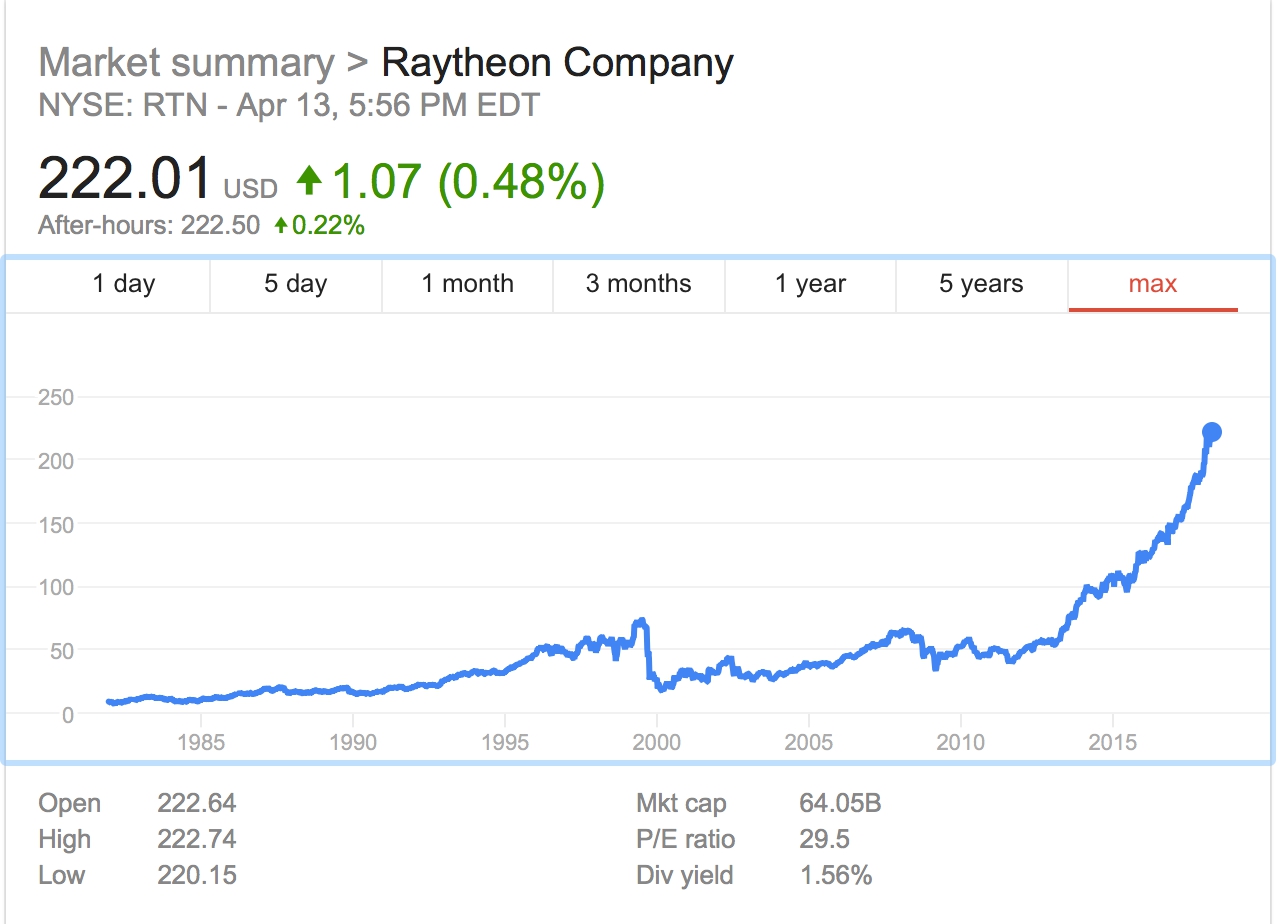 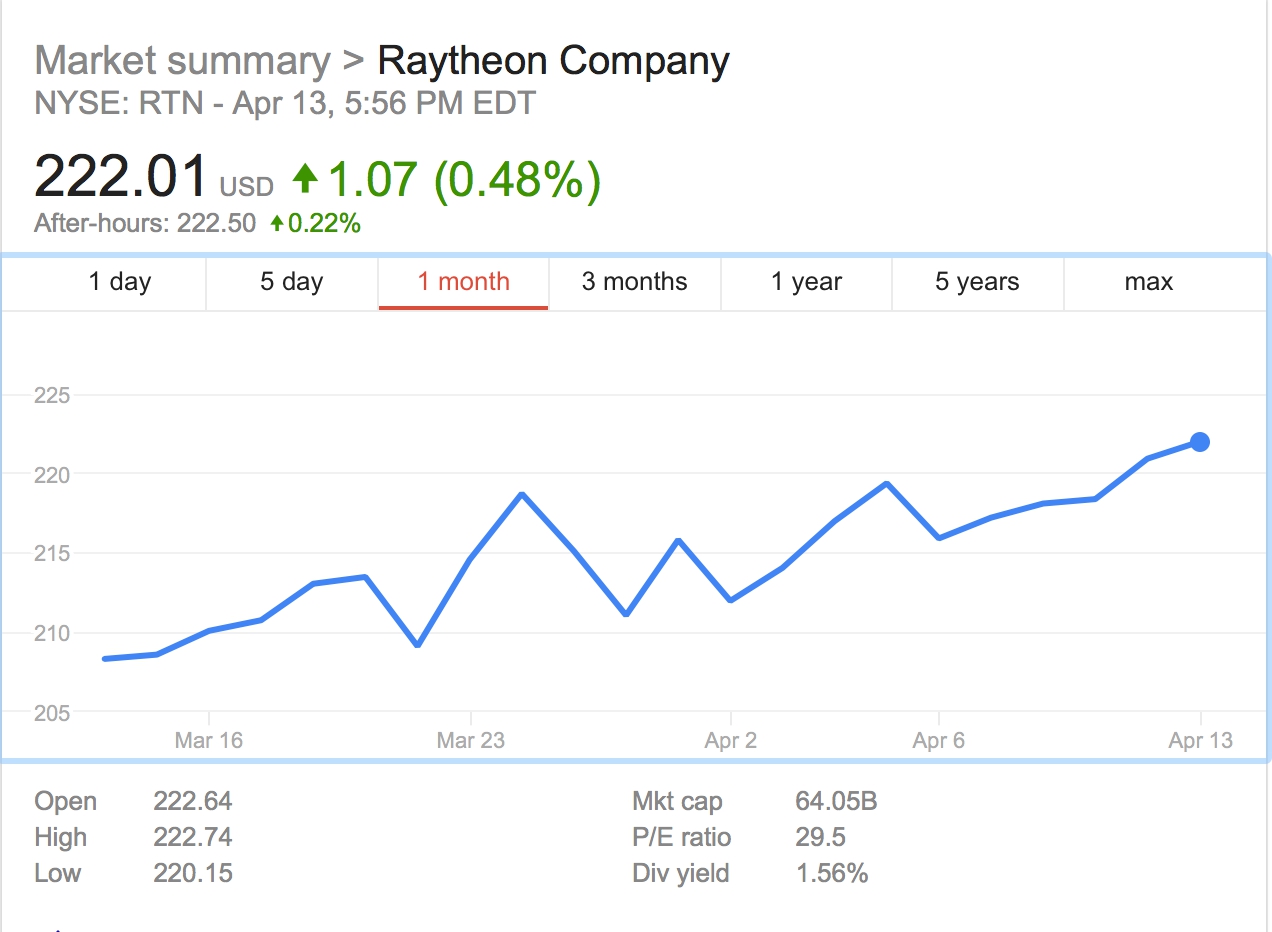 As the above chart shows, war is great business if you’re an arms dealer. This isn’t the first time Raytheon’s shares have spiked during conflict. On the morning after Trump used 59 of its Tomahawk missiles to bomb Syria in April 2017, company shares soared. The company added $1bn to its market value. But during the recent escalation in tensions, the company’s value has risen even further.

Raytheon exports its wares across the world. In the last five years, Raytheon has sold weapons to Saudi Arabia, Israel, Kuwait and Pakistan. This includes selling its Paveway IV bomb to Saudi Arabia – a bomb that Campaign Against Arms Trade says was used in airstrikes against Yemen.

Raytheon is a US company. But it has a presence around the world. In Saudi Arabia, for example, it employs 400 people. And in May 2017, it boasted of a “new chapter” with Saudi Arabia, focusing on:

The UK also has its own branch of Raytheon. In fact, the Paveway IV bomb was developed in the UK. When the first $200m international contracts were announced for the Paveway IV in 2014, it was hailed as an “export boost to the UK”.

All aboard the money train

Arms dealers make no secret of the profits they make from war. In 2015, Bruce Tanner, the executive vice president of Lockheed Martin, the world’s largest arms company, spoke of the “indirect benefits” of the conflict in Syria, largely in relation to Turkey shooting down a Russian plane, stating this “makes Syria an incredibly dangerous place to fly”.

But Tanner was not alone in unashamedly boasting about the profits from death and destruction. Tom Kennedy, Chief Executive of Raytheon, spoke of a “significant uptake” in sales to the Middle East.

These companies are making a killing from war. So if we want to stop war we have to follow the money. We should protest outside Downing Street. But if we really want to have an impact, we also have to direct our anger at the people profiting from death and destruction.

Featured image via Wikimedia and Flickr/money