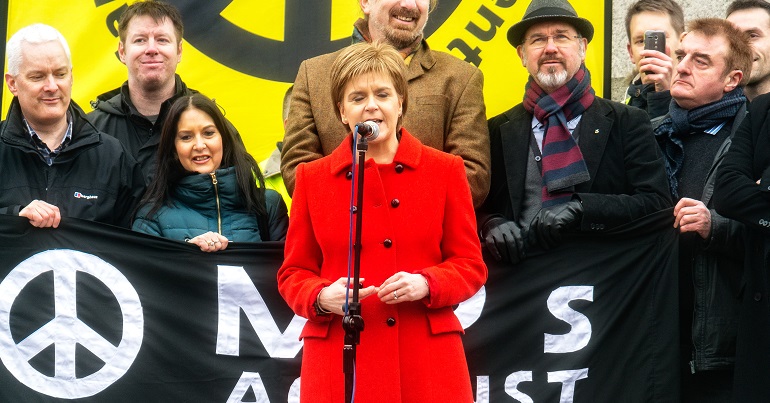 A coalition of the US, UK and France launched airstrikes in Syria on 14 April. The intervention was a response to an alleged chemical weapons attack in Douma. The UK Government claims the strikes were directed at targets that would limit the chemical weapon capacity of president Assad’s regime in the country.

In response, however, Nicola Sturgeon, raised a crucial point. She said that Theresa May hasn’t answered the question of how the military intervention is going to bring “long term peace” to Syria. She also criticised the government’s decision to not consult parliament on the issue:

Air strikes have not resolved situation in Syria so far – nothing I’ve heard persuades me they will do so now. An international strategy for peace must be pursued – not a course that risks dangerous escalation. UK foreign policy should be set by Parliament, not US President.

Sturgeon’s view was supported by other SNP figures. Speaking to the Today programme, Ian Blackford, the SNP’s leader in the UK parliament said:

I’m bitterly disappointed that the government seems to have danced to the tune of President Trump, rather than actually waiting to come to parliament to have an informed debate about where we are, and to consider what would be an appropriate response.

He went on to question both the ethics and the effectiveness of the military action:

An individual bombing raid is not going to deal with the issue. It’s not going to deliver peace for Syria. It’s not going to give humanitarian aid to the people in that country. And that’s what we need to focus on. And yes, of course we have to hold people to account. But doing this on a one off basis like this, I’m afraid, really isn’t going to take us much further forward, it’s about making a sure we can make a fundamental difference in Syria. And that’s where we need to get that political consensus both at home and internationally. Because I don’t believe for one minute that the people of the United Kingdom will subscribe to the action that has been taken.

This legally questionable action risks escalating further, as US defence secretary James Mattis has admitted, an already devastating conflict and therefore makes real accountability for war crimes and use of chemical weapons less, not more likely.

Similar sentiments have since been shared by other members of the Labour shadow cabinet. Diane Abbott tweeted:

BBC saying Theresa May pressed for military strikes on Syria before parliament returned, to avoid scrutiny. This would be an affront to democracy.

And shadow education secretary Angela Rayner questioned whether airstrikes would act as a deterrent against chemical weapons:

The OPCW was to begin its investigation today. As an elected representative of the people of Ashton Under Lyne I was frozen out of the decision our PM has made to bomb Syria. I am still concerned as to how our action will stop the use of chemical weapons&bring peace #SyriaStrikes

Criticism of the military action has been strong among other parties too. Green Party member of the House of Lords Jenny Jones said:

Cannot imagine the horror of being in Syria. Years of suffering under the cruelty of Assad, suffering under various lawless groups and now more foreign bombing. What will be left of Syria? #NotInMyNameTheresaMay https://t.co/Det76uNYOV

Why no parliamentary vote? Shocking to wake up to this. Thinking of people in Syria desperately hoping to stay safe in the face of this action. #NotInMyNameTheresaMay https://t.co/mYHBuVmqFF https://t.co/nOdSNWOjWu

These responses from Green Party figures come after their co-leader, Caroline Lucas, condemned the hypocrisy of western foreign policy on 13 April. Speaking on Radio 4‘s Any Questions, she said:

If we are as concerned as people say we are about the state in Syria, then why is this Government not accepting far more refugees? Why are we not actually having a coherent and consistent foreign policy? Why are we still selling arms to Saudi Arabia, when we know they are going to be used in Yemen?

Plaid Cymru were among those who condemned the action. And the Liberal Democrats criticised prime minister Theresa May for not allowing parliament to vote:

.@vincecable: "The Prime Minister could and should have recalled Parliament this week and sought the approval of MPs before proceeding."https://t.co/cvOwaHY4xb

Opposition hasn’t only come from parliament and political parties. A Yougov poll earlier this week found that just one in five people support airstrikes in Syria. There was also a wave of protests in the run up to May launching airstrikes last night.

It’s clear that the Government doesn’t have the support of the public, nor of parliament. This action has been taken without popular consent.

– Take action against military intervention with Stop the War Coalition.