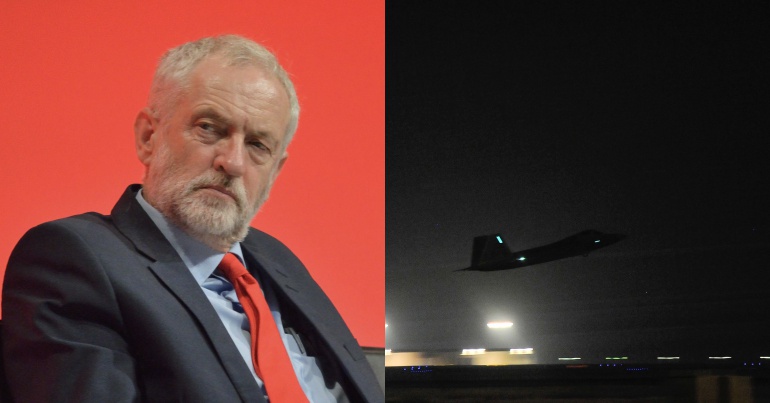 On 14 April, the US, the UK and France, launched airstrikes in Syria after a suspected chemical weapons attack in Douma on 7 April. The strikes took place only hours before an investigation by inspectors from the UN’s Organisation for the Prohibition of Chemical Weapons (OPCW) was due to start.

In his initial statement Corbyn said:

This legally questionable action risks escalating further, as US defence secretary James Mattis has admitted, an already devastating conflict and therefore makes real accountability for war crimes and use of chemical weapons less, not more likely.

As The Canary previously reported, a group of international lawyers stated that strikes, “unless conducted in self-defense or with United Nations Security Council approval, are illegal and constitute acts of aggression”.

May, however, claims the strikes were “right and legal”.

Corbyn also explained that these attacks had gone ahead without any debate in parliament:

Theresa May should have sought parliamentary approval, not trailed after Donald Trump. The Government should do whatever possible to push Russia and the United States to agree to an independent UN-led investigation of last weekend’s horrific chemical weapons attack so that those responsible can be held to account.

The Labour leader also wrote a letter to May, stating she is “accountable to parliament” for this action:

I have written to @Theresa_May in response to last night’s legally questionable air strikes on Syria.

Parliament should have been consulted and voted on the matter. The UK Prime Minister is accountable to Parliament, not to the whims of a US President. pic.twitter.com/MWHxmoPbPZ

Corbyn said in the letter:

I believe that Parliament should have been consulted and voted on the matter. The UK Prime Minister is accountable to Parliament, not to the whims of a US President.

And he argued that others also have concerns about the legality of the attack:

the UN Secretary General has said as much, reiterating that all countries must act in line with the UN Charter. You assured me that the Attorney General had given clear legal advice approving the action. I would therefore be grateful if you would publish this advice in full today.

Given that neither the UN nor the OPCW has yet investigated, it is clear that diplomatic and non-military means have not been fully exhausted.

And the letter laid down a clear challenge to May:

Acting through the United Nations, I believe Britain should now take a diplomatic lead to negotiate a pause in this abhorrent conflict in which hundreds of thousands of Syrians have already been killed and millions displaced.

Vladimir Putin has said Russia will call for an emergency session of the UN security council over the attacks and condemned them as an “act of aggression”. On Twitter, the Russian embassy in the US stated that there will be “consequences”:

Statement by the Ambassador Antonov on the strikes on #Syria:
A pre-designed scenario is being implemented. Again, we are being threatened. We warned that such actions will not be left without consequences.
All responsibility for them rests with Washington, London and Paris. pic.twitter.com/QEmWEffUzx

“A country decimated by brutal war”

As Corbyn explained, however, the consequences of strikes and further military action are the greatest for the Syrian people:

We have the grotesque spectacle of a wider geopolitical proxy battle being waged with the Syrian people used as pawns by all sides.

Because the latest strikes land on a country that is already brutalised by war and violence. Since 2011, Human Rights Watch estimate that at least 400,000 people have died, in a conflict characterised “by human rights and international humanitarian law violations”. Over 6 million Syrians are refugees, and at least 6 million more have fled their homes but remain in Syria.

Corbyn is right, bombs will not save lives. Bombs will not create peace. And these attacks are contributing to the “grotesque spectacle” in Syria.