As war starts in Syria, the company that tortured prisoners in Abu Ghraib may already be on the ground - Canary 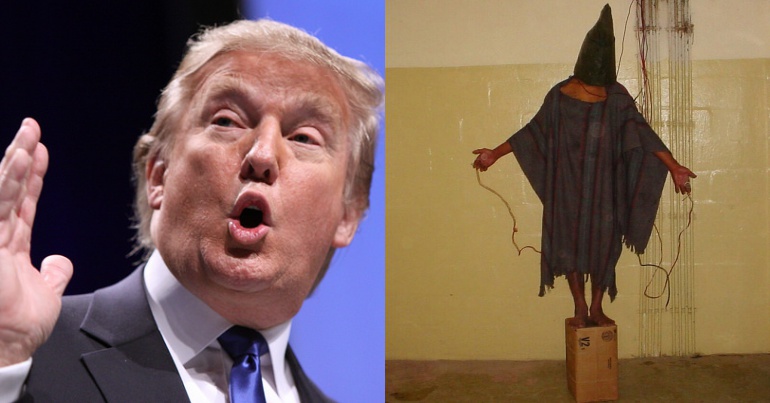 A newly released report [pdf] reveals that there are US military contractors in Syria. The report emerged only a week after Donald Trump said America would withdraw from Syria. On 14 April, he bombed Syria with support from the UK and France. But one of the military contractors which may now be in Syria is owned by the same company which was responsible for the abuse and torture of prisoners at Abu Ghraib following the US-led invasion of Iraq.

The Young Turks network stated that the report [pdf], “which compiles data for U.S. contractors operating under authority of the United States Central Command (CENTCOM)”, listed Syria for the first time since Trump came to office, but:

It’s not clear whether the new data categories reflect Pentagon anticipation of long-term commitment of private U.S. personnel in Syria.

Although specific companies are not named, this information had been previously reported in 2016 by The Daily Beast:

The contract announcement said Six3 Intelligence Solutions—a private intelligence company recently acquired by CACI International—won a $10 million no-bid Army contract to provide “intelligence analysis services.” According to the Pentagon, the work will be completed over the next year in Germany, Italy and, most notably, Syria.

Six3 Intelligence Solutions was taken over by CACI International in 2013. Among other things, CACI provides “IT support and services, including information collection and data analysis, to the U.S. Intelligence Community and the military”. In 2003, CACI was in Iraq, because as its website states:

Interrogation services were an extension of that work, which CACI provided in response to a request by the U.S. Army, which did not have sufficient, available personnel for assignment to the Iraqi theater at the onset of the war. In August 2003 CACI responded to the Army’s request for these services by identifying and hiring qualified individuals with previous experience in information gathering and analysis.

Abu Ghraib in Baghdad was a former torture prison of Saddam Hussein. In 2003, allegations emerged of “severe maltreatment and abuse of Iraqi prisoners by US military and intelligence personnel and contractors” following the US-led invasion of Iraq.

This led to an internal US army investigation in January 2004, and to the Taguba report which concluded that “detainee abuse” had taken place. CACI employees, who undertook “linguistics and interrogation work” at Abu Ghraib, were also accused of:

having “instigated” and “encouraged” the abuse as well as participating in it, and in aiding to cover it up. This sparked international outrage and inflamed a brutal Iraqi insurgency.

But CACI pushed numerous legal challenges to deny these accusations. This was not resolved until 2017 [pdf]. Until this point, CACI “largely evaded accountability for their direct role in the torture of Abu Ghraib prisoners”. Lawyer Katherine Gallagher noted that:

military officers were court-martialed for their misconduct, but the private contractors [CACI] walked away with large payments, and they continue to be awarded millions of dollars in government contracts.

Despite accusations of abuse by CACI employees, the US government issued multi-million dollar contracts to the company. As Al Jazeera reported:

prior to concluding investigations on the torture scandal at Abu Ghraib, the US government offered CACI an extension of their contract in the amount of 23 million dollars – accountability for torture, after all, is limited, conditional, and sometimes rewarded for making bolder, the discourse and infrastructure that sustains abuse in the war on terror.

And now, fifteen years after the US-led invasion of Iraq, history seems to be repeating itself. Trump bombed Syria – despite lacking concrete evidence. Theresa May skipped into war much like Tony Blair trotted after George W Bush in 2003. But this time, we know CACI is already in Syria – despite its apparent involvement in torture and abuse.

This article was updated at 9am on 14 April, to reflect that US-led bombing has already started in Syria.