Britain is supporting a terrorist regime. It's time to say 'enough!' - The Canary 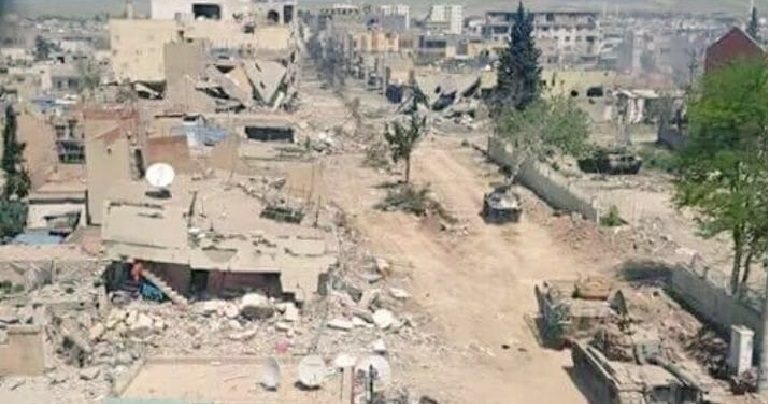 The British government is supporting a terrorist regime. And if we have any sense of commitment to secular democratic values, we need to stand up now and say ‘enough!’

Recep Tayyip Erdoğan’s Turkey has already committed war crimes against Kurdish communities in recent years, according to the Permanent Peoples’ Tribunal. But NATO’s second-largest army has also essentially been recycling Daesh (Isis/Isil) fighters to attack Syrian Kurds. The terror group has suffered defeat after defeat at the hands of Kurdish-led militias in Syria. Now, though, Turkey is pouring fuel on the fading jihadi fire.

these [Turkish-backed] Arab militia… call themselves the Free Syrian Army but actually seem closer to al-Qaeda and Isis… it’s pretty disastrous because there were a bit over 300,000 Kurds there, and two thirds of them have fled. So we’re almost certainly going to see a serious ethnic cleansing there and Arabisation of this area which has been traditionally Kurdish.

In a previous report, The Independent shared a video of these Turkish-backed fighters, and Cockburn explained that:

Syrian Arab militiamen leading the Turkish attack on Afrin… are threatening to massacre its Kurdish population unless they convert to the variant of Islam espoused by Isis and al-Qaeda. In the past such demands have preceded the mass killings of sectarian and ethnic minorities in both Syria and Iraq.

The alleged links between Turkey’s government and Daesh-style jihadis are nothing new, though. Columbia University’s David L Phillips is just one academic who has been outlining these for years.

Yet in spite of all this, there are no signs that the British government is planning to stop lucrative arms deals with Erdoğan’s regime.

Turkey, of course, claims it is fighting against Daesh. But it only does so for the propaganda’s sake. For years, the terror group spoke of “full cooperation with the Turks”. Jihadis reportedly had safe houses in southern Turkey where they stayed before crossing into Syria. There was [paywall] also a “porous” border, through which a “steady stream [paywall]” of jihadis went into Syria. And Turkey consistently failed to cut off Daesh supply lines. In fact, it appeared to be happier to share a border with the chauvinist terrorists than with democratic and gender-equal Kurdish forces.

Then, when Ankara finally promised in 2015 to join the US-led air campaign against Daesh, it actually used the opportunity to attack an old enemy instead. It broke off promising peace talks with the Kurdistan Workers’ Party (PKK) and launched an offensive on Kurds both inside Turkey and abroad. According to one US military source:

Turkey wanted to move against the PKK, but it needed a hook… It’s clear that ISIL was a hook.

For Cockburn, the US allowing this new anti-Kurdish war to start was its “biggest mistake in the Middle East since it invaded Iraq in 2003”.

And now, Turkey is allowing jihadis across its border again to attack Kurds in Afrin.

But who exactly is Turkey attacking now?

Turkey’s current targets in Afrin are the Kurdish-led People’s Protection Units (YPG). These units have been leading the fight against Daesh (Isis/Isil) in Syria for years, while defending a progressive feminist experiment in direct democracy. Even Turkey’s Western allies have seen these forces as some of the most effective anti-Daesh ground forces. In fact, both the UK and the US have essentially been relying on them in that fight, giving them increasing strategic support since late 2014. And only months ago, the YPG and its allies defeated Daesh in its de facto Syrian capital of Raqqa. But because the YPG is an ideological ally of the PKK – with which Turkey is at war, Turkey calls it a terrorist group and wants to destroy it.

Today, the PKK and its allies condemn all attacks on civilians. And they have never attacked Western targets.

Afrin, meanwhile, was one of the calmest areas in Syria until Turkey decided to increase its attacks. And it hosted tens of thousands of refugees, with little international support.

But while Western governments have betrayed the YPG, refusing to stand up to Turkish attacks, even mainstream media figures have treated the YPG and the YPJ (its all-female brigade) as heroes. In a 2016 documentary, for example, Ross Kemp praised the political system the YPG and YPJ defend – now the Democratic Federation of Northern Syria (DFNS) – as “a genuine movement for democracy, equality and tolerance”. And in the wake of the tragic death of British YPJ volunteer Anna Campbell recently, there were many tweets like this:

Do you think Anna Campbell, the first British woman to be killed fighting Daesh in Syria, should get a Royal Wootton Bassett-style hero's funeral? True, she was fighting with Kurdish militia, not the British Army – but what an incredibly brave woman she was, fighting our enemies. pic.twitter.com/RJd2bEw7Se

The art of appeasing warmongering chauvinists

Former YPG volunteer Macer Gifford recently told The Canary that the UK government is “playing with fire when it comes to supporting Turkey”. And indeed, the government seems more committed to appeasing Erdoğan than taking a moral stand.

But that is incredibly dangerous, as Gifford said. Because Erdoğan is essentially challenging his allies to see how far he can push them. On 23 March, he announced:

Last night I spoke with U.S. President Trump on these issues. I discussed the same things with Putin two days ago. I told them: ‘We won’t take steps backward from here…’

Erdoğan is testing the waters. And faced with a Western policy of appeasement, his regime will only continue with its offensive against anti-terror fighters in northern Syria. That would be disastrous.

If it was Iran or North Korea doing what Turkey is doing now, we wouldn’t hear the end of it. There would be sanctions, there would be a march to war, and the media would be full of hyperbole about the end of the world. But because it’s Turkey, Western governments are refusing to speak up in any meaningful way. The US has even dropped charges against a number of Turkish bodyguards who were filmed beating up protesters last year. And in September 2017, Donald Trump said Erdoğan was “getting very high marks”. (Note: this was after Turkey reportedly committed anti-Kurdish war crimes.)

By standing alongside Erdoğan rather than standing up to him, Western governments have betrayed their stated mission of defeating Daesh in Syria. And they have shown immense hypocrisy in the process.

They seem to be hoping for the best by cosying up to megalomaniac chauvinists like Erdoğan. Countries such as Turkey and Saudi Arabia mean big money, of course. So it’s easy to understand why our governments (and their economic backers) are afraid of pushing them away.

But as is often the case, what is ‘best’ for corporate elites is not what’s best for human civilisation. And the hypocrisy is sickening. One day, governments say they want to defeat Daesh. The next day, they’re allowing the massacre of anti-Daesh fighters. One day, they criticise human rights abuses in Iran. The next, they’re shaking hands with the Saudi crown prince – the man responsible for countless civilian murders in Yemen.

If Western governments already had a poor reputation in the world, they’re now tarnishing their names even more.

You either oppose chauvinism, or you don’t. And right now, it looks like our governments don’t.

That’s just not good enough. We deserve better. And the world deserves better.

We have a responsibility to stand up. We must say ‘enough!’, before Erdoğan does even more damage.

– Write to Theresa May and your MP. Ask them to urge Turkey to stop its war on Afrin, to resume peace talks with its internal opponents, and to release all political prisoners. Until that happens, ask them to cancel and stop approving arms sales to Turkey; and support Campaign Against Arms Trade to help make that happen. Also support Peace in Kurdistan, the Kurdistan Solidarity Campaign, and attend one of the emergency protests if you can.