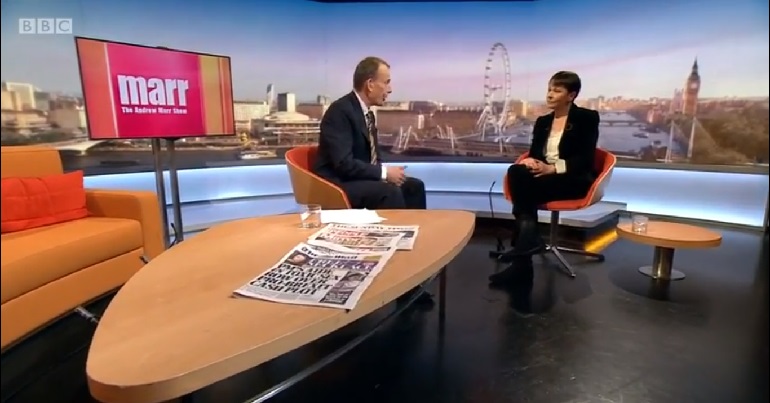 Caroline Lucas slammed Michael Gove’s record on the environment in an interview on The Andrew Marr Show after being asked whether he was a “nightmare” for her.

The Green Party MP attacked the government’s environment plan and condemned its insufficient action to cut the use of plastics. She also reminded viewers of the time Gove tried to remove climate change from the school curriculum.

Andrew Marr asked Lucas about Gove’s record on the environment. He stated that Gove “is actually saying things which are attracting the Green vote” and so is a “little nightmare” for her.

Lucas was quick to pick apart that claim:

Gove is certainly saying lots of things… He’s learnt some of the language. But if you look at the detail – look at that 25-year environment plan – the top line of that was basically saying ‘we will try to get rid of single use plastics by 2042’, by a quarter of a century’s time.

She then went on to criticise Gove’s past actions:

There’s no real sense that this has changed from the Michael Gove who, not long ago, was trying to take climate out of the curriculum. We need to see far more ambitious action on the environment.

And then she closed with an attack on the state of the environment under the Conservatives:

We are facing a sixth mass extinction. We are over-fishing. We are cutting down too many trees. The environmental crisis is getting worse. And that is why the Green Party is needed more than ever.

You can watch the interview here:

Gove will reportedly soon introduce [paywall] measures to tackle plastic waste. These would include outlawing the use of plastic straws, as well as bringing in a new plastic bottle recycling scheme. This follows a ban on the production of microbeads used in products such as soaps or toothpaste.

But Gove has faced extensive criticism for his other positions on the environment. He has generally voted against measures to prevent climate change. He also voted against legislation that would have required environmental permits for companies engaging in fracking. Furthermore, he supported the controversial badger cull.

It’s not just Lucas who is asking questions about Gove’s environmental record either:

#marr Michael Gove does not care about the environment. He cares about Michael Gove. Just because he says something doesn’t mean he will do anything. SPIN.

So it doesn’t look like Lucas, or a number of others, believe Gove is going to be a “nightmare” for the Green Party anytime soon.

– Read more articles on the environment.