Drug lord is recaptured, because of his oversized ego - Canary 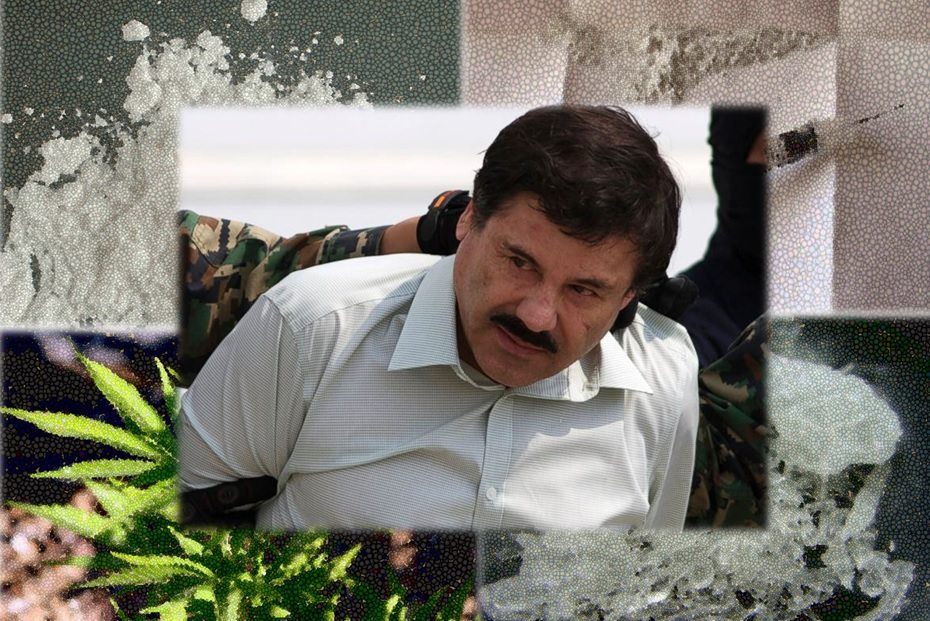 Laws are often invisible when injustice reigns, and an item’s illegality means nothing if it’s in demand. As long as there’s enough human desperation, risks will be taken and violence embraced in the interests of survival. And an interview with the egotistical drug lord Joaquín ‘El Chapo’ Guzmán – recaptured in Mexico on 8 January – reveals precisely why this is true for the drug trade, which he says will continue unchanged whether he’s in jail or not.

Actor Sean Penn travelled to Mexico in 2015 and observed the “indisputable charisma” of the “peasant-farmer-turned-billionaire-drug-lord” first hand. Answering one of Penn’s questions, Guzmán stressed quite ominously:

this will never end

The boss of the Sinaloa cartel, who calls himself “a person who’s not looking for problems”, explains the above assessment:

drug trafficking is already part of a culture that originated from the ancestors. This is worldwide… people who dedicate their lives to this activity do not depend on me

The views of a kingpin from humble beginnings

Penn says that many of his questions were softened or skipped altogether, but the picture that comes across in the interview is nonetheless fairly clear. Guzmán told the American actor he came from a “very poor” family which lived in a part of Mexico where there were no job opportunities:

The only way to have money to buy food, to survive, is to grow poppy, marijuana… where I grew up there was no other way and there still isn’t a way to survive, no way to work in our economy to be able to make a living.

Guzmán today runs the “biggest international drug cartel the world has ever known”, says Penn. His cartel allegedly controls the trade of “more than half of all the cocaine, heroin, methamphetamine and marijuana that come into the United States”. And because of the large number of drug addicts in the world, Guzmán asserts, the trade will not decrease “in any way at all” when he dies.

The drug lord admits that he would enter into the energy sector in an ideal world but that, because his wealth is considered to be illegal, his investment opportunities are limited. Nonetheless, he shares the names of a number of corrupt international corporations with Penn, “through which his money has been laundered, and who take their own cynical slice of the narco pie”.

Although Guzmán accepts that “drugs destroy”, he also asserts nihilistically that he is “happy” with the current state of the world and wouldn’t change anything. In fact, when asked if his activities had a substantial impact on Mexico, he replied “not at all”.

And who knows, maybe there are indeed factors in the country which have a much bigger impact than Guzmán’s cartel. During Penn’s time in Mexico, he witnessed the corruption of soldiers at a military checkpoint (who clearly knew Guzmán’s son), and for this and other reasons refers to the Mexican government as a “narco regime”.

Why did Penn interview ‘El Chapo’, and how did others respond?

In 2014, Guzmán’s capture by Mexican authorities after 13 years on the run became the crowning achievement of a government led by controversial nationalist president Enrique Peña Nieto. According to Associated Press, it was a “beacon of success amid domestic woes”. This fact made Guzmán’s escape from a maximum security prison in July 2015 even more humiliating for the state.

The drug lord clearly wanted to make the most of his freedom, and the opportunity soon arose for Penn to meet the fugitive in person. The actor explains:

I’m drawn to explore what may be inconsistent with the portrayals our government and media brand upon their declared enemies… My only interest was to ask questions and deliver his responses… when I do journalism, I take no payment.

Looking to put drug violence in context, Penn suggests that all drug customers are:

complicit in every murder, and in every corruption of an institution’s ability to protect the quality of life for citizens

He also speaks of the clear failure of the “war on drugs”, highlighting:

Madonna, who divorced Penn in 1989, reaffirmed her love for the actor just hours after the interview was published. Fellow performer Matt Damon also defended him by saying:

It’s part of what we do in our job really well, and Sean somehow figured out that he had an audience with this person and I’m sure was pursuing something creatively and thought a meeting with him would be valuable

The interview with a figure accused of hundreds of murders (on top of the intimidation and displacement of numerous farming communities), however, was not praised across the board. White House chief of staff Denis McDonough claimed it was “maddening” that Penn’s interview had given Guzmán a voice in the media. Republican presidential candidate, meanwhile, called it a “grotesque” action. And for Mexican education secretary Aurelio Nuño Mayer asserted:

These are not stories that should be presented as success stories

How was ‘El Chapo’ recaptured and what will happen now?

According to David Agren at the Guardian:

In early 2012, Mexican film and soap star Kate del Castillo suggested that she trusted Guzmán more than the country’s government, although she called on him to “traffic with love” instead of drugs. The drug lord’s lawyer soon got in contact with the actress. Penn says Guzmán was “interested in seeing the story of his life told on film, but would entrust its telling only to Kate”. And when they met in person, the actor says, he greeted del Castillo “like a daughter returning from college”.

The big problem came when del Castillo and Penn had their meeting with Guzmán in October 2015. One anonymous Mexican official told the Associated Press that the actors unknowingly led authorities to Guzmán and his men, who were almost captured. From that moment on, the drug lord was constantly on the run.

Biographer Andrew Paxman, who has written about Televisa (the politically influential Mexican TV channel which gave del Castillo her big break), suggests it was not just Guzmán’s desire to film a biopic that led him to take one too many risks:

In other words, Guzmán’s ego was his downfall.

He now faces extradition to the USA, though one official from the Office of the General Prosecutor of Mexico has asserted that this process could take up to a year, in particular thanks to the lawyers Guzmán has employed to fight the extradition. And who knows, he may well escape from jail again in the time this takes.

One matter that is clear is that Mexico’s drug problems will not be solved with Guzmán’s capture. As he made very clear himself, the drug trade will continue with him or without him. The arrest is just a token action which ignores the roots of the problem and is nothing more than a minor setback for the Sinaloa cartel. And president Peña Nieto’s attempts to privatise everything from public education to the state-owned energy industry are only worsening the plight of ordinary Mexicans – pushing both democratic accountability and economic stability further away from their hands. In this environment, it’s difficult to imagine a reduction in the desperation, corruption, and inequality that fuel the country’s drug trade.

Is there any way to stop drug cartels?

As long as there’s demand in the United States and elsewhere, the drug trade will continue to be the best option for desperate and disenchanted citizens in drug-producing countries like Mexico. And economic inequality and political corruption in these countries make it even harder to combat the trade. Mexico, for example, is the least equal and most corrupt member of the Organisation for Economic Co-operation and Development (OECD).

As Sean Penn insists, the “war on drugs” has clearly failed miserably. And the reason is that is has targeted the symptoms of the drug trade rather than the causes (like demand and desperation). If we are pessimistic like ‘El Chapo’ Guzmán and we believe this trade will inevitably continue forever, then we could at least decriminalise drugs. Portugal, for example, treats addicts and drug use as a public health service – and it works. The country has seen a massive reduction in addictions and drug usage rates now among the lowest within the EU. Another step may be to legalise drugs and regulate them in much the same way as alcohol and cigarettes.