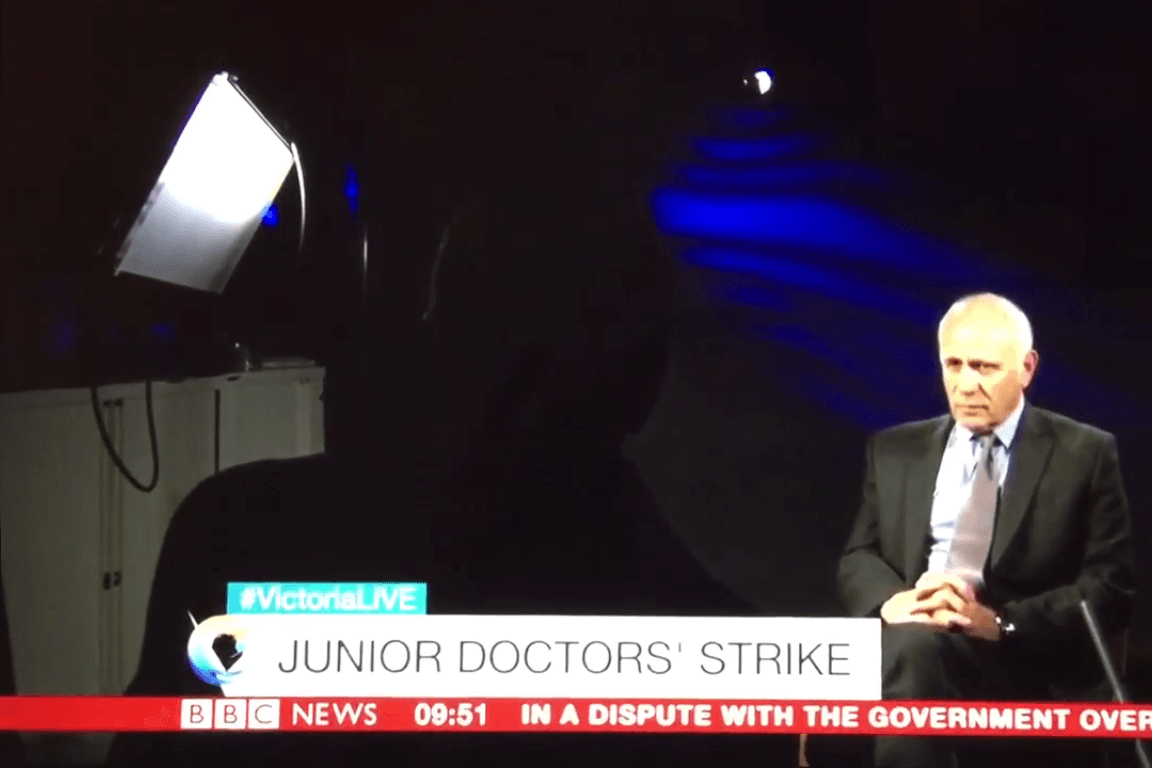 Do you feel it’s good that doctors, on the eve of a national strike, and indeed those who use the NHS, aren’t able to hear from the Secretary –

He was then interrupted by a voice off camera:

Hang on a minute, we’re not dealing with this nonsense

Apparently holding politicians to account for their actions is “nonsense”. Jeremy Hunt is to blame for the doctors’ strike. The government is trying to vilify the junior doctors, but the doctors have been forced to strike as a last resort after many months of futile negotiations.

Junior doctors are not a danger to patients, but the long hours Hunt is trying to impose on them are. Patients being treated by overworked and exhausted doctors is a dangerous practice.

The journalist is not only justified in inquiring into Hunt’s whereabouts, it is surely his duty to do so.

The man off camera continued:

We agreed a series of questions…

While it is not surprising that political representatives agree on questions prior to interviews, Hunt should answer for the first national doctors’ strike in over 40 years. He is, after all, the Secretary of State for Health.

Well, I didn’t agree any questions with anyone

In a democracy, I think we’re allowed to ask questions about our representatives

The interview was aired on the BBC, but it was originally from Sky News.

This video is reminiscent of other ‘control-of-message’ moves by the Conservatives. Last year, in the election campaign, David Cameron staged a Conservative rally where the cameras were angled in order to create the illusion there was a room full of excited supporters. And just last week, Cameron planted a question from a fellow minister about William Shakespeare, in order to tell jokes he’d written beforehand, rather than answer important questions on flooding. Even the Sun was ashamed of him:

Therefore, this video raises the question of how far the government may have gone in trying to influence media coverage of the junior doctors’ strike. It is worth noting that this comes after the BBC has been under fire for their coverage of Jeremy Corbyn’s shadow cabinet reshuffle, and the coordination of the live on-air resignation of Stephen Doughty. The BBC could learn a thing or two from this type of journalism. Holding the government to account for its actions is much more important than manufacturing ‘news’.