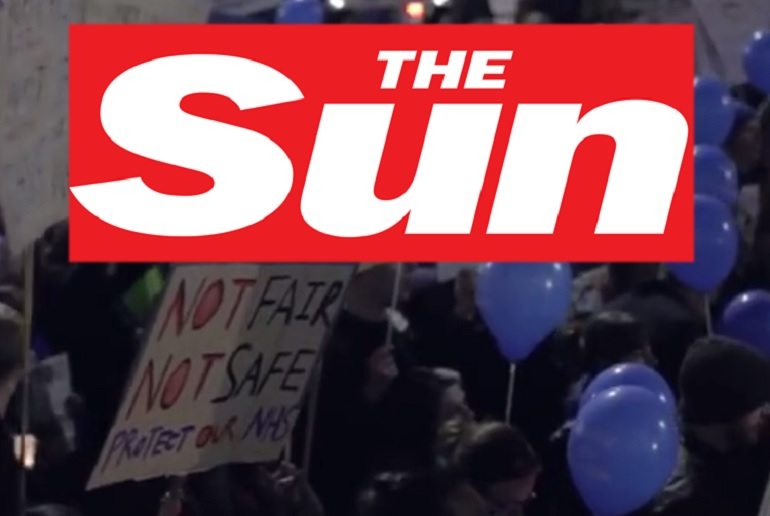 Media outlets have the power to make us hate people who are being oppressed and love those who are doing the oppressing. And that is precisely what the Sun has done – yet again. Its aim this time is to smear the junior doctors who began a strike on 12 January to protest an unpopular and dangerous new contract imposed by Secretary of State for Health, Jeremy Hunt.

But to begin with, let us look at the end of the Sun article in question – a piece from 9 January named “Moet medics: High life of docs’ leaders who are heading up NHS strike”. Quoting a British Medical Association (BMA) spokesperson, the paper reports:

The Government is trying to introduce an unsafe and unfair contract.

The decision to take action was made by the 98 per cent who voted.

One might have thought they’d lead with those sentiments.

Instead, Rupert Murdoch’s tabloid mouthpiece has gone after the striking doctors as if it were the official mouthpiece of Britain’s Conservative government.

The paper begins its smear on the junior doctors by accusing the union reps leading the strike of being “champagne-swilling socialists”. Aiming to distract readers from the real issues behind the strike, the figures targeted are condemned for having had “lavish holidays and parties” in the past, and for living in “£500,000 homes”. (We might be tempted to ask at this point why the paper has never focused its efforts on exposing the extravagant private lives of its owners or its friends in the government. But then that’s fairly self-explanatory.)

Dr Daniel Djemal was for some reason condemned for “enjoying hols and boozy parties”. Clearly the paper thought many Brits would be shocked at the way Djemal has holidays and drinks alcohol; pastimes that no-one else in the country shares, of course.

Another junior doctor who was criticised for posting “a pic of her and an elephant” on Facebook was actually revealed later on to have been volunteering at a hospital in Nepal at the time. So the Sun unknowingly highlighted a case of a junior doctor helping others even when she was not at work.

But one of the most bizarre comments may have been about Dr Yannis Gourtsoyannis, whose crime was apparently having “signed a letter supporting Jeremy Corbyn for Labour leader”. ‘How dare a citizen express his democratic will freely? Not on the Sun’s watch, confound  him!’

Social media users quickly jumped to the defence of the junior doctors and criticised the Sun’s smear story.

On Twitter, a number of comments reflected the reality of junior doctors’ lives in a humorous way under the hashtags #smearthedocs and #moetmedics:

GP reg splashes out on luxury £1600 exam and spends Sunday revising next to my pants #moetmedics #smearthedocs pic.twitter.com/JPh697pX0r

#juniordoctor buys nappies from Waitrose instead of making own from newspaper in abundant spare time #smearthedocs pic.twitter.com/GZE5UiqG1B

Then there were some more serious comments from sympathetic voices:

The S*n says doctors are living the high life, then says nothing about Parliament getting £7m/yr subsidised food & drink. #smearthedocs

Finally, ‘Big up the NHS’ brought home perhaps the most serious message in response to the Sun’s smear campaign:

Remember @TheSun has tried to #smearthedocs as part of their strategy to destroy the NHS. So the moral is……. pic.twitter.com/YKKDoAlPcW

Our advice at the Canary? Have some fun writing your own #smearthedocs tweets in support of the junior doctors. And if you see a striking doctor, shake their hand and thank them for all that they do.

Also, let the Sun know what you think about their attacks:

Be polite, but remember to go into great detail when sending The Sun your stories. #smearthedocs pic.twitter.com/FsC7msTVho