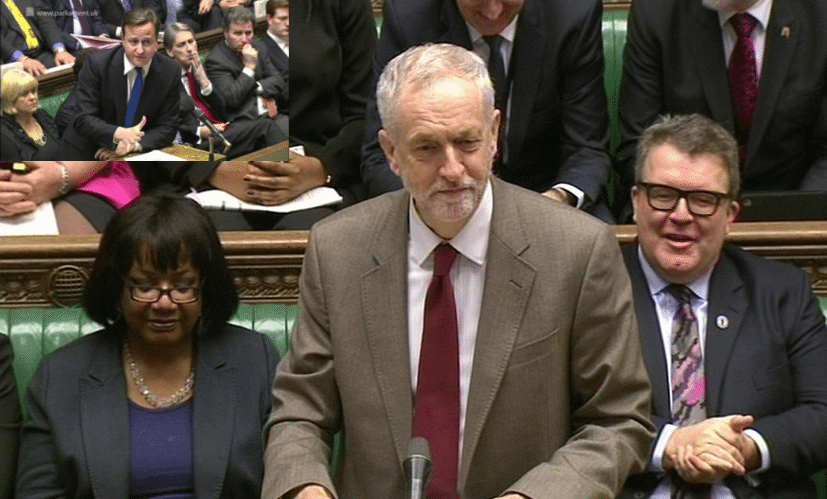 THE CANARY VIEW ON PMQs

Jeremy Corbyn entered the House of Commons for this week’s Prime Minister’s Question time clearly reinvigorated after reshuffling his front bench. After the opening gambits, David Cameron looked like a man who just realised he’d brought a knife to a gunfight.

The PM’s advisers’ obvious strategy had been to win the day with a series of jokes mocking the Labour leader, his reshuffle, and attempting to leverage the discomfort of Blairites within the party. After Cameron was unable to answer a basic question on Housing, Corbyn asserted:

“Well, he’s clearly not thought this through very carefully”.

Cameron swung back with:

“Well, I admit it wasn’t as thoroughly thought through as the honourable member’s reshuffle.”

But the joke fell flat, given Corbyn’s reshuffle successfully rid his cabinet of the Blairite contingent who can now spend their Friday nights at Annabelle’s, plotting their next unsuccessful coup and crying into their Moet.

Corbyn stayed on the issues and clearly surprised the Prime Minister with a series of sharp, targeted and stinging attacks, for which Cameron had no answer.

The Labour leader focussed all six questions on the Housing Crisis, a crisis for which the Conservative government has no remedy. Just the day before, the government had actually defeated a Labour motion in the Housing Bill stipulating that landlords must ensure rental properties are fit for human habitation. Corbyn successfully landed his gloves on the PM over this stunning vote, which leaves tenants of rental properties with no guarantee that the home, which they pay increasingly unaffordable rents to live in, will meet basic living standards.

The PM looked visibly uncomfortable, shifting his weight about and appealing to his benches to support him with a backing track of yah-boo hysterics. But as the Labour benches roared as blow after blow rained down on the hapless PM, the Tory benches were notably, and uncharacteristically quiet.

Cameron announced that he had identified a number of ‘sink estates’ in the UK which the government plan to knock down, building new homes on the sites. Corbyn correctly identified the potential for this programme to turn into gentrification on steroids. So he asked the PM a simple question: how many of these new homes would be affordable or social housing?

The PM was unable to give any figures and would not even commit that there would be any provision for social housing.

Moving on, Corbyn wanted to know if these homes would be affordable to someone earning the government’s so-called ‘living wage’.

The PM responded with a hail Mary: “I very much hope they will.”

Hope? His government is making the plans. Either they will, or they will not. Given the answer that would most embarrass Corbyn would be that they will, we must assume that the new housing is indeed gentrification masked as ‘regeneration’. In short, the new homes will be unaffordable to the existing tenants and they will be forced to relocate to similarly poor housing further afield, surrendering their communities to richer people.

Forced into a corner on the issue, Cameron attempted to brand Corbyn a ‘small c conservative.’ Given the PM, his party, and a sympathetic media have spent the last several months claiming Corbyn is a radical leftist, this gag was met with a confused shuffle of papers and the odd cough.

The showdown clearly presented the Labour Party as a viable alternative, in line with Corbyn’s promise to build a country in which:

“You don’t have to take what you’re given.”

This argument is all the more powerful as Tory claims of being the ‘party of aspiration’ are consistently undermined by policies which make it harder, not easier, for people to get on in life. New Labour, the Liberal Democrats and the Conservatives have succeeded in building:

All of these negative outcomes of decisions by the New Labour, Coalition and Conservative governments are killing the aspirations of young people. Aspiration starts with investment – the investment of skill and effort on the part of the individual, the investment of time, love and support by those around them, and the investment of funds by the state to remove unnecessary obstacles from their path. It is this promise that is becoming clearer from the Corbyn-led Labour party – a promise of hope, and togetherness, which might just win the day come 2020.