Why are junior doctors striking? This is what they have to say [TWEETS, IMAGES] - Canary

On the first of three planned days of industrial action, junior doctors and other NHS professionals are standing united in order to oppose an employment contract that despite being widely seen as ‘unsafe’, is still being forced through by Jeremy Hunt and his team.

Throughout the recent weeks of meetings and talks about the junior doctors’ contract, the government has still failed to concede that the proposed changes are dangerous to patients and to doctors.

The dispute is not only about pay – in fact, most doctors would see an overall reduction (and not rise) in wages as a result of the contract – but also about the extended hours doctors will have to work. For many, this means they will have very little chance of maintaining a life outside of work and spending time with their families, (which is already difficult to do when shifts do not start and end as they may seem to do on paper).

Extended hours would also force doctors to work far beyond what is recommended, so they would be even more vulnerable to stress and exhaustion, making them more prone to making mistakes, which could ultimately endanger the lives of patients.

Now almost two-thirds of junior doctors across the country are striking. They are keen to stress that although many of them are on picket lines, there is emergency care in all hospitals, so people can use these services as normal. 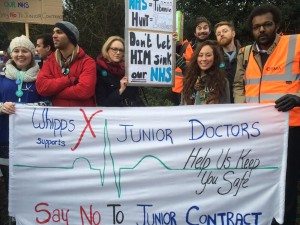 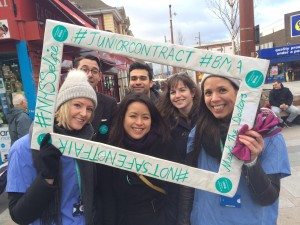 We spoke to doctors ar Whipps Cross Hospital in Leytonstone doctors to get their views on the issue. Dr Niki Fitzgerald who is also one of the British Medical Associations (BMA’s) local negotiating committee member said:

Patients are always our first priority, but we know this contract is unsafe and unfair for both staff and patients.

The government is leaving us with no choice but industrial action. Despite the scare-mongering, the hospital will be open today but like a weekend, with consultant-led cover.

Tired doctors make mistakes…the government has failed to engage with our concerns about safeguarding.

The Government’s actions threaten patient safety and the future of the NHS.

If not on the picket lines doctors were out in local communities teaching cardiopulmonary resuscitation (CPR) to members of the public.

Despite the recent stories in the media trying to paint doctors as wealthy ‘leaders’, junior doctors have been well supported at picket lines and also on social media:

From members of the public sharing their support:

You are the guys on the Front Line who save us, care for us. If you feel the need for this action so be it #strike https://t.co/l3JTTQg5P3

Doctors are to Cameron what miners were to Thatcher. If he can break them he can break NHS. We cannot let it happen. Our lives depend on it.

Political groups came out in support:

Dennis Skinner, 83, "You saved my life. I had your support when I needed it. You have mine now" #JuniorDoctorsStrike pic.twitter.com/sNyK38MNub

MPs themselves also were keen to spread the word:

Joined the #JuniorDoctorsStrike picket at St Thomas Hospital. Jeremy Hunt urgently needs to get back round the table pic.twitter.com/sbfeClBMil

The BMA has more information about the dispute between junior doctors and the government.

Sign this official petition against the Junior Doctors’ Contract. It expires in March 2016 – if we get together we, can show the Government how strongly we oppose it.