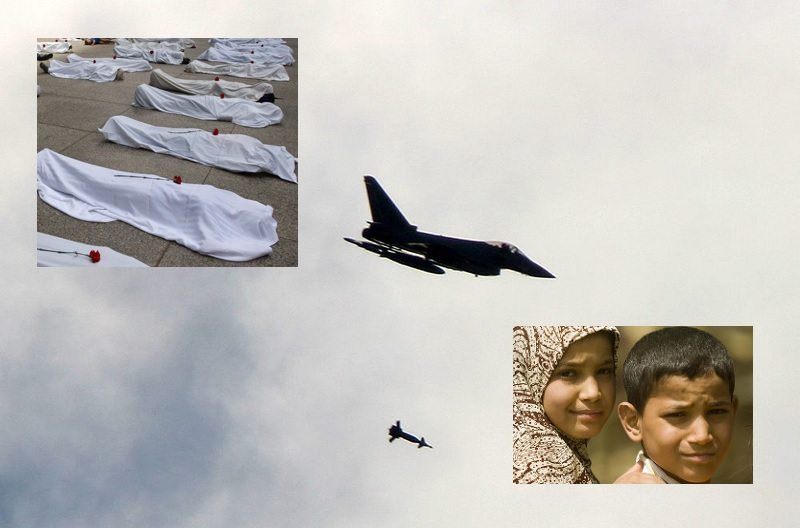 The Ministry of Defence (MoD) will only use “internal” evidence, or information that comes from friendly “local forces” to assess civilian casualties in their airstrikes, The Herald has revealed. Evidence from human rights groups, and independent monitoring groups, will be dismissed, according to the report.

The shocking admission is the consequence of a call for an investigation into civilian deaths, after the independent monitoring group Airwars claimed that between 72 and 81 civilian casualties may be linked to British airstrikes in Iraq. According to The National, Chris Woods, the director of Airwars, asserts:

Eight reported incidents took place in December in Ramadi and Mosul, in which alleged coalition and possibly British strikes may have killed a total of 72 to 81 civilians

Errors do occur, intelligence failings do happen and sometimes things do go wrong. It would be unprecedented in the history of aerial warfare for the UK not to have killed civilians in those air strikes

The MoD rebuked the claim, insisting their were “no reports” of civilian casualties in Iraq or Syria in relation to UK airstrikes. Of course, if the MoD do not count evidence from groups such as Airwars as admissible, such claims would not be acknowledged in their “reports”.

Airwars collate their evidence from media sources, and on-the-ground eyewitness accounts – which the group then assess for veracity. Eyewitness accounts are of particular importance in Syria, according to Amnesty International. Kristyan Benedict, Amnesty’s crisis response manager, told the Herald:

One thing about the conflict situation in Syria now compared to Iraq or even Afghanistan is there is a lot more monitoring on the ground…It is more difficult for international bodies like the UN and Amnesty to have wide access, but in Syria from 2011 many independent groups and activists set themselves up to monitor violations primarily by the Syrian government.

The MoD’s refusal to consider evidence from these sources, defies the long standing tradition of allowing weight for concerns of respected human rights groups. It also stands in contrast to US practice. The publication by Airwars of details about 52 US-led coalition airstrikes, which the group claim may have resulted in the death of at least 459 non-combatants, contributed to the US central command (Centcom) undertaking investigations into the allegations.

As detailed in The Herald, Woods commented on the importance of this development,

One of the things that troubled us was that we were aware of three times more alleged civilian casualty incidents than Centcom was…Their own internal mechanisms were simply missing two out of three alleged cases on the ground and we ended up sharing our data-set with them, simply so they could begin triggering investigative processes for those events they were unaware of.

The discovery that the MoD is shunning evidence from anyone but UK military personnel, or “local forces”, has drawn criticism. Woods has said that if MPs

had known when the Prime Minister told MPs there had been no reports of civilians killed by the UK in Iraq and Syria, that what he was actually saying is ‘we haven’t reported to ourselves we have killed civilians in Iraq or Syria’, they would have perhaps treated the government’s views with far more scepticism

The decision has also been questioned by Brendan O’Hara, the SNP’s defence spokesman at Westminster, who commented:

It is the old cliché – in war truth is the first casualty. When a respected organisation says there are civilian casualties and the government says there are not, who do you believe? The truth probably lies somewhere in between, but at the very least the claims should be investigated.

Undoubtedly, the MoD has an interest in limiting accusations of non-combatant fatalities. Civilian deaths are one of the most controversial consequences of military action, which is why the discourse on whether to commit to Syrian airstrikes was heavily focused on the promise of “precision strikes”. This move, however, betrays a deep fear in the UK government that its “dynamic targeting” may not be all it’s cracked up to be.

Why else would they refuse to consider the evidence from human rights groups? If they are certain of their own reported civilian death toll, why not face these allegations head on? The UK governments resolution that it will not brave such scrutiny, will inevitably lead to suspicions that it cannot counter the claims. Anything short of complete transparency, and investigations into culpability, will smack of a cover-up.