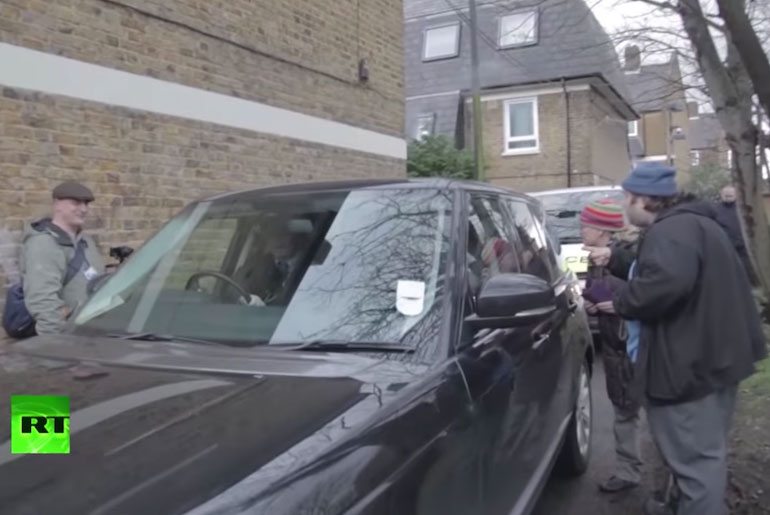 When Iain Duncan Smith visited Peckham Job Centre on Monday, dozens of protesters greeted him by shouting “murderer of disabled people”. So he fled – by climbing into his blacked out Range Rover and covering his face with a copy of the Daily Mail.

Confronted with the truth about his policies, the famously delusional and truth-shy Work and Pensions Secretary hid. And he hid behind the newspaper famous for propagating his anti-disability propaganda.

Duncan Smith may not be able to face it, but the protesters were entirely correct to suggest that his policies are killing disabled people.

According to researchers from Oxford and Liverpool universities, his fitness for work tests – the ‘work capability assessments’ that determine whether or not a disabled person will have their benefits removed – were associated with 590 extra suicides between 2010 and 2013, along with 279,000 extra cases of mental illness and 725,000 extra prescriptions for anti-depressant drugs.

“The pattern of increase in mental health problems,” said the study’s author, “closely matches the increase in assessment of the work capability assessment.”

And the situation is likely worse now than it was when the study was conducted. Atos quit its contract to administer the tests in March last year as its reputation was in tatters. But since US outsourcing giant Maximus took over, the number of tests deemed substandard has more than doubled, meaning more people than ever are being let down by Duncan Smith’s policies.

Meanwhile, the average waiting time for an assessment is a staggering 23 weeks. That’s 23 weeks of living on a substantially reduced Employment and Support Allowance (ESA), 23 weeks of wondering whether you will have any kind of future income, and 23 weeks of living in dread at the prospect of having your health assessed by a Kafkaesque bureaucracy that routinely declares people ‘fit for work’ just weeks before their deaths and informs dead people they are ‘too healthy’ for sickness benefits.

To be fair to Iain Duncan Smith, it’s not just him who wants to hide; most people don’t want to face the harsh reality he has created.

But while the minister can hide his head in the Daily Mail and go back to the rent-free £2m mansion he calls home with a wad of his £134,565-a-year taxpayer-funded salary and expenses in his pocket, many of the UK’s sick and disabled people have nowhere to go when their safety net is cut away from under them.

Michael O’Sullivan took his own life after being found fit for work. Mark Wood starved to death. And countless others are being subjected to unbearable levels of stress, suffering, and poverty.

You’d think that the very least Iain Duncan Smith could do would be to remove the Daily Mail from his eyes just long enough to notice the dark reality his policies have created. You’d think. But you’d be wrong.