This Tory minister just got caught 'lying' about Turkish membership in the EU, here's the truth (VIDEO) - The Canary 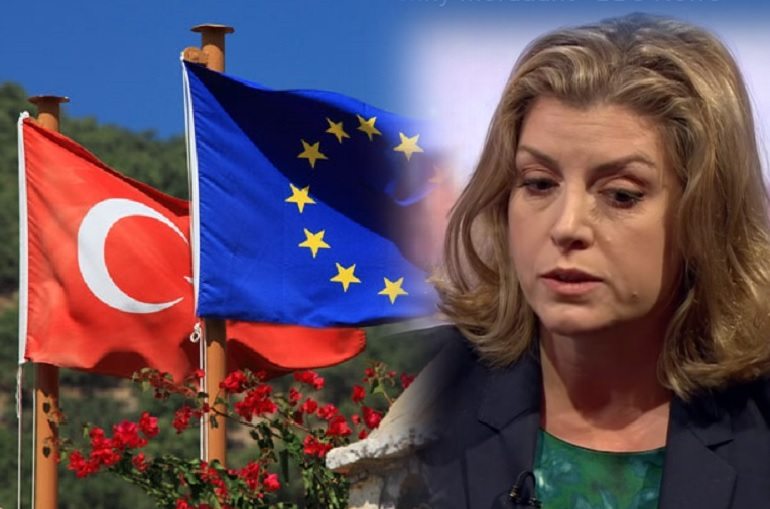 As the English football team beat Turkey in its first warm-up match for Euro 2016 on 22 May, Turkey emerged as a new battleground in the EU referendum debate. In particular, the country’s potential entry into the EU came under increased scrutiny. But the reality of tensions between the EU and the current Turkish regime is actually much more interesting.

Putting the lies aside

On 22 May, the BBC’s Andrew Marr grilled Penny Mordaunt, the Minister of State for the Armed Forces, on her comments regarding Turkey’s potential entry into the EU, saying:

But Marr pointed out:

the British government does have a veto on Turkey joining so we don’t have to let them join.

The Tory minister stuck with her position, answering “No, it doesn’t”.

The BBC later backed Marr up, clarifying that:

Turkey must get the approval of the 28 member states at the European Council and the European Parliament… It would then need to be ratified by national Parliaments, giving the UK a second opportunity to potentially block a deal.

Others were not so diplomatic in their rebuttals of Mordaunt’s comments. Prime Minister David Cameron claimed she was just “wrong” about the facts. And James McGrory, a spokesman for Britain Stronger in Europe, said she was “plain and simple lying to people”.

In fact, even if David Cameron’s regime wanted Turkey to join the EU, it would still be very unlikely – particularly as the prospect is not popular with France and Germany at the moment.

Damian Chalmers, meanwhile, who is Professor of EU law at the London School of Economics, has insisted that the UK has a “double veto” on the issue, and that “we are talking many many years” before Turkey would be allowed to join the EU. The country has now been waiting decades to enter Europe, but has been prevented from doing so because of its incredibly poor record on human rights and freedom of speech, among other factors.

The EU-Turkey refugee deal is on the point of collapse

On 20 May, Asylum judges in Greece refused to send a refugee back to Turkey after insisting it is not a “safe third country”. Relief agencies – like Médecins Sans Frontières, the International Rescue Committee, Save the Children, the Red Cross, and the UN refugee agency (UNHCR) – agreed, insisting that Turkey is not a safe country for migrants to be sent to.

The exchange of rejected refugees with Turkey for accepted refugees was at the heart of the EU’s deal with Ankara. Another condition of the agreement was that Turkish citizens would be allowed visa-free access to EU member states by June 2016, if Turkey agreed to 72 conditions.

One of the key issues for the EU is Turkey’s draconian use of anti-terror laws – which in the last year have been used to attack journalists, academics, civilians, and even human rights lawyers. Jean-Claude Juncker, the President of the European commission, has made it very clear that the refugee deal would be void if Turkey does not make big changes regarding this issue.

Turkish President Recep Tayyip Erdoğan, however, seems intent on shooting himself in the foot. Referring to his regime’s faltering deal with the EU, he recently said:

They say ‘I am going to abolish visas and this is the condition.’ I am sorry, we are going our way and you go yours.

As tensions rise with the EU, here’s the path Turkey’s taking

In his search to change Turkey’s constitution and give himself more power, Erdoğan has recently moved to purge the Turkish parliament of his most vocal opponents. Specifically, the removal of MPs’ parliamentary immunity on 20 May will see 51 of 59 ministers from the pro-peace Peoples’ Democratic Party (HDP) charged with “membership in a terrorist organisation”. The ruling AKP, with its toxic mixture of nationalism, capitalism, and religious chauvinism, will hope to replace the HDP ministers with politicians from its own party.

President Erdogan has taken all of the strings of the party, the state and the parliament

And a big part of Erdoğan’s takeover, says Dağhan Irak at Independent Turkey, has been his manipulation of the fact that, since the foundation of the Republic of Turkey in 1923:

politics in Turkey has been based on a strong central state… Even after the shift to a multi-party system in the 1950s, all parties have been expected to respect some core values that put nationalism at the centre

This is particularly problematic given that Turkey’s large Kurdish communities have long been denied basic rights by the state. As Kurds have increasingly demanded their democratic rights and greater political autonomy, the solution of the Turkish state has consistently been to send the military in to repress all dissent.

Turkey is not a safe place, and the EU knows it

Peace talks between the Turkish regime and Kurdish communities from 2013 to 2015 were slowly destroyed as Erdoğan’s regime was increasingly accused of supporting Daesh (Isis/Isil), directly or indirectly. As a result of the government’s own waning popularity and increasing protests, the state has waged an anti-Kurdish war ever since July 2015. It has also cracked down on freedom of expression, attacked both the media and academics, detained thousands of social activists, and called anyone questioning its policies ‘terrorists’.

In particular, the regime has attacked the Kurdistan Workers’ Party (PKK) and its allies in northern Syria (Rojava), arguing that their members are separatists and terrorists. This is in spite of the fact that the PKK has condemned all attacks targeting civilians and stressed:

In March, the Documentation Center of the Human Rights Foundation of Turkey (TIHV/HRFT) released a fact sheet revealing that military actions during curfews in Kurdish communities between August 2015 and March 2016 had killed at least 310 civilians.

There have already been a number of mass protests in Europe against the regime’s war, and on May 24 a 50,000-strong petition calling for Erdoğan to be tried in the International Criminal Court (ICC) will be presented to the UN Commission on Human Rights.

If the Turkish regime’s stubborn resistance to peace, democracy and change continues, its much-criticised refugee deal with the EU will likely collapse entirely in the coming weeks. And as this happens, the country’s entry into the EU will become an increasingly distant prospect.

– Write to David Cameron and your MP to ask them to push the Turkish regime to stop its war on Kurdish communities.

– Only by accepting the PKK as a legitimate representative of Kurdish communities in Turkey will peace negotiations be possible. Ask the British government to change its stance towards the PKK by signing this petition.

– And sign this petition aimed at preventing further state massacres in Kurdish communities.