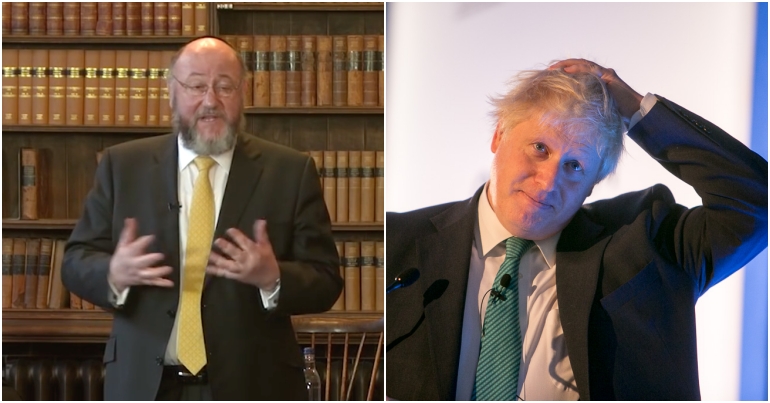 Antisemitism in the Labour Party is dominating the headlines again after the Chief Rabbi decided to intervene in the election. Ephraim Mirvis described the antisemitism ‘crisis’ in the Times:

A new poison – sanctioned from the top – has taken root in the Labour Party.

It is not my place to tell any person how they should vote. I regret being in this situation at all. I simply pose the question: What will the result of this election say about the moral compass of our country?

But the subtext is clear – don’t vote Labour. Unsurprisingly, the establishment press has lapped up his comments. But the coverage is missing one crucial and short sentence; a sentence which allows readers to put his comments into context: that Mirvis described Johnson as a “longstanding friend”.

Congratulations on your new job

When Johnson was elected as PM, Mirvis wrote:

I am delighted to congratulate Boris Johnson, a longstanding friend and champion of the Jewish community, on becoming the next leader of the Conservative Party and our next Prime Minister.

Now this could be read as describing Johnson as a friend ‘to the Jewish community’ or as a personal friend. Either way, Mirvis certainly seems keen to cultivate a cosy relationship. He continues:

As he accepts upon himself the mantle of responsibility to lead our nation, may he be blessed with the wisdom to successfully navigate the political uncertainties we face and bring healing and prosperity to our great country.

But, whether it’s the Guardian or the Mail, you’d be hard-pressed to find any reference to this ‘longstanding friendship’ anywhere in the media coverage. This is important. Not because it’s down to any of us to make assumptions about Mirvis’s intentions in writing his piece. But because it gives essential and crucial context to his comments.

Meanwhile, ‘leading’ journalists such as Laura Kuenssberg and Robert Peston, uncritically parroted his remarks on Twitter without any counterbalance given from Jewish people who disagree with Mirvis – something which at least some of the press did manage.

This fact also gives context to some of the elements of Mirvis’s article that just can’t be taken seriously. For example, he asks:

How complicit in prejudice would a leader of Her Majesty’s opposition have to be to be considered unfit for office?

A question he should really be asking of his “longstanding friend” Johnson rather than Corbyn, an MP who’s spent his life fighting racism and prejudice. Seriously, we have a PM who’s refused to apologise for describing Muslim women as ‘letterboxes’ – a comment that was demonstrably linked to a rise in hate crime – and Mirvis is attacking an anti-fascist for “prejudice”. At best it’s twisted. At worst, it’s dark and manipulative.

And as Jewish writer Michael Rosen pointed out, Johnson supported a far-right leader who is actually antisemitic.

Yes, let's discuss the safety of Jews. How safe are the Jews in Hungary? Why would Boris Johnson be so quick to congratulate Orban? Why is this not a concern? https://t.co/r09lSOSUnf

Now ‘whataboutery’ is not a good look. All racism and prejudice need tackling whether it’s antisemitism or Islamophobia. But when you have a Conservative Party that’s embroiled in numerous and far-reaching accusations of Islamophobia that aren’t being taken seriously and don’t dominate the headlines in the same way, serious questions need to be asked. And that’s also ignoring the issue of antisemitism in the Conservative Party, which seems to barely warrant a mention.

Understand this, please:
this so-called "chief rabbi"
slanders jeremy Corbyn
on behalf of LESS than 20%
of British jews.
Many of us, indeed most
in my judgement, want #CorbynByChanukah 🙂#Jews4Jeremy pic.twitter.com/yPhRb1UjLi

By contrast, I think Johnson is a lying racist who demeans the high office he holds https://t.co/8PqS2fu88t

As a Jew whose great grandparents fled the persecution of Jews in Russia during the late 19th Century to UK, I would also like to say that #Corbyn is my choice in this election and the greatest hope we’ve had to build a better future in my lifetime #Jews4Jeremy #VoteLabour https://t.co/8LF7P1YlQ5

the overwhelming majority of British Jews are gripped by anxiety.

As a British Jew, I do feel anxiety. But as I’ve written before, this fear isn’t caused by Corbyn but the climate that’s been manufactured around the antisemitism crisis – something this Twitter user also pointed out:

And as another Jewish person wrote before the Chief Rabbi made his comments:

Despite the doomsday picture being painted for British Jews, I’m not fearful of Corbyn or the possibility of him reaching 10 Downing Street. Nor do I believe that the Labour Party is “poisoned” or “rampant” with antisemitism. But what has left me horrified over the last four years has been the reckless and irresponsible way in which antisemitism has been used to vilify Corbyn and make the entire Labour Party appear toxic.

This is exactly how I feel. And now it’s more important than ever that Jewish people who support Corbyn speak out and provide an alternative to the narrative the establishment press is desperate to perpetuate. It’s utterly clear the mainstream media isn’t going to provide the full picture when it universally misses out such a crucial fact from all its coverage. So it’s down to all of us to shout about it and spread this message far and wide.