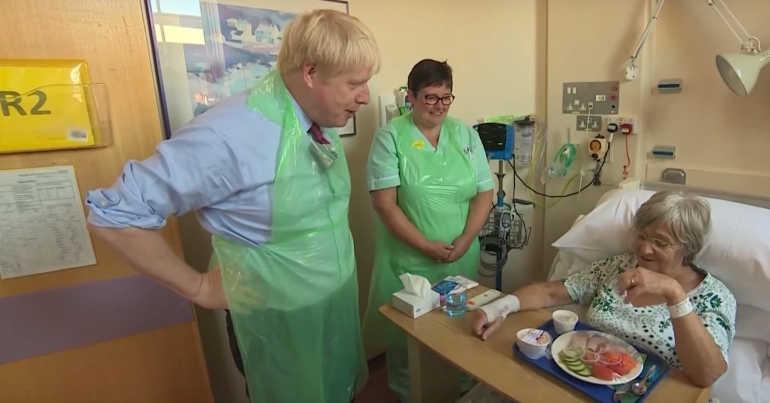 Boris Johnson appears to like visiting hospitals, given the number of them he’s visited over the election campaign. This is perhaps surprising given the reaction he gets from the people who work or use the hospital.

But these visits are seemingly even worse than we thought. Because an NHS doctor has apparently lifted the lid on “what really happens” when Johnson visits a hospital. And it should be essential reading for every voter.

The doctor, who works in a northern Leave-majority town, posted the account anonymously on Twitter via a friend:

This is the truth of what happens when @BorisJohnson visits your hospital. This has been written by an anonymous friend of mine. Please read. Please share. It is the truth about our #NHS – the lies cannot continue@JonAshworth @OwenJones84 @shaunjlawson @jonworth @IanDunt pic.twitter.com/NYTSKTi9BF

They described the fact that:

They painted the ward I work on. We were asked to hide dirty laundry. Cleaners were sent out into the car park on a rainy cold day, picking leaves off the ground. We were told he was going to use our acute area as a ‘meet and greet’.

In a damning statement, the doctor claimed that:

As a result, the doctor alleged that a different consultant took their place, “one high up in management”.

“The atmosphere was tense and unpleasant”

Out of the handful of people who did meet Johnson, the doctor said that:

There was one healthcare assistant who was very excited he was there because she had seen his dad on I’m a Celebrity get me out of here. She didn’t know exactly who he was but she loved his dad and wanted a selfie. There was a photo of that which made the papers. Hers was the sole smile I saw that day.

The doctor described the atmosphere as “tense and unpleasant” and “furious and sullen”. And they believe that the visit affected the care they could give patients:

I could feel my ability to safely see extremely ill patients was slipping – both by the physical space invaded, the wet painted walls, his enormous entourage, but also at the stress of our hospital being visited by the very people who’d caused us such damage.

The doctor made the following comparison:

It was like being visited at home by your abusive boyfriend asking ‘what can I do to help?’

There’s only one way to save the NHS this election

An Ipsos MORI poll has shown that the NHS has overtaken Brexit as the number one issue that voters care about this election. Under successive Conservative-led governments, the NHS has been starved of funding, the performance of hospitals in England are at “the worst level on record” and, according to The King’s Fund, there were 100,000 staff vacancies as of March this year.

Meanwhile, Johnson has continually repeated the lie that his party will build 40 new hospitals. The reality is only six hospitals will have money for upgrades and 21 trusts have funding to “develop their business cases” for hospitals. But most importantly, Jeremy Corbyn’s revelations about Johnson’s trade deal with Trump are clear; Johnson appears willing to sell off the NHS to secure a trade deal with Trump.

So if we want to save our NHS this election, there’s only one choice – to vote for a Labour government that will value and fund one of our most treasured services.