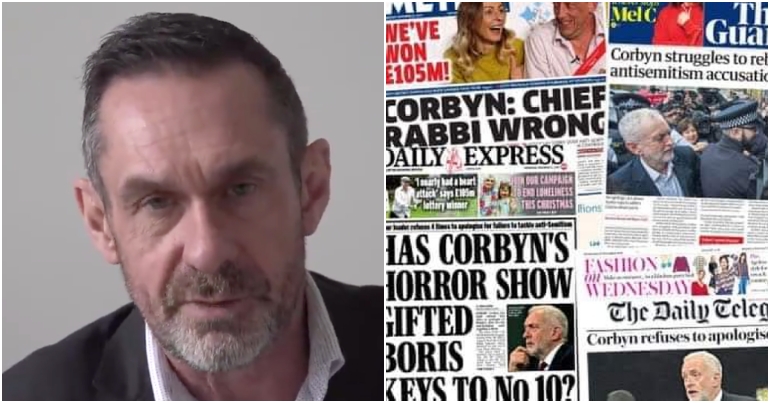 The state of the UK media was on full display on 27 November. Following the Chief Rabbi’s comments and Jeremy Corbyn’s interview with Andrew Neil, this is a snapshot of how the press responded: 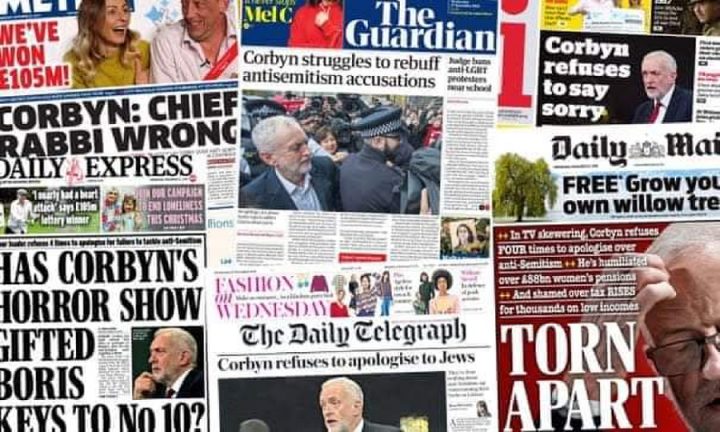 But journalist Paul Mason’s brutal analysis of the media explains the state of these headlines.

“It’s a machine for telling lies”

Mason, who’s worked in the media for 30 years, including on Newsnight, states in a video for Double Down News:

I know that the hostility to Labour leaders who want to change things is what lies behind all of this. If there was a Labour leader who said ‘that’s fine guys, keep your profits, keep your carbon burning fracking industry’, the press would leave them alone.

Because, as Mason says, there’s an “inbuilt bias towards the status quo” from people who come from “better off families”. As an example of this, Mason cites that when he started working for the BBC:

He also makes it clear that he isn’t just talking about the BBC, before landing the killer blow that, “at election times”, the media is:

a machine for telling lies.

Tory Lies, The Media Machine and What We Can Do About It @paulmasonnews

Mason, who recorded the video before the launch of the Conservative manifesto, says that the Tories are “producing a lie a day about Labour”, and he predicts that:

towards the end of this election this will become very, very vicious.

He also thinks he knows how this could unfold. He speaks about the Zinoviev letter that was faked by MI5 and MI6 to destabilise and wreck Labour’s chances of winning the election in 1924. The letter called on communists to support the Labour Party. It was printed four days before the election, and:

And Mason expects that there will be:

one Zinoviev letter scale lie per day in the last seven days of this election.

Are we there yet?

While we’re at the point of lies and distortion, this election hasn’t quite reached the point of outright forgeries. Yet. But Mason’s comments explain a lot about the headlines over the last two days.

The Chief Rabbi, who doesn’t speak for many Jewish people and who described Boris Johnson as “a longstanding friend and champion of the Jewish community”, interfered in the election. Now that’s fine. He’s entitled to his views. What’s not fine is the response of the press – which neglected to mention his previous support for Johnson – and seems determined to portray Corbyn, a lifelong anti-racist, as an antisemite.

What’s worse is this cynical manipulation is aimed at one thing – supporting an actual liar who’s refused to apologise for his very real racism. It’s an insult to everyone who’s ever suffered or stood up to racism.

But whatever happens over the next two weeks, there is one major difference between now and 1924. We have our own media, and we have social media. We have the means and the power to get out an alternative narrative, and we have to keep exposing exactly what the establishment media is doing.

The mainstream media received a shock in 2017. Despite its continued attacks and its best efforts, Theresa May didn’t win her predicted majority. Rupert Murdoch was allegedly so angry after the exit polls that he stormed out of an election party.

The media elite don’t have the power they once had – and they’re scared of a radical government that will tackle their vast profits. These headlines are evidence of this. The elite cannot be allowed to win and continue perpetuating the horrific inequality that should be on the front page of every paper.

So, don’t let the billionaire press fool you. We need a different narrative, and we most definitely need a radically different government.