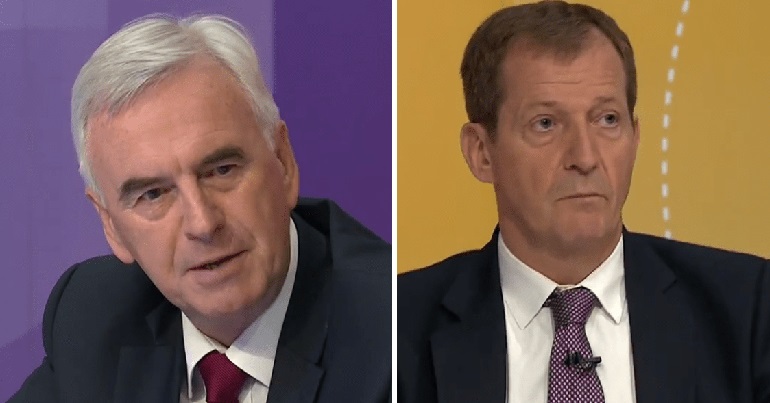 Iraq war PR man Alastair Campbell has announced publicly that he no longer wants to be in the Labour Party. And as Labour supporters around the country celebrate, they’re avidly sharing an old video of shadow chancellor John McDonnell which shows perfectly why Campbell’s exit is so welcome.

On 28 May, Campbell revealed that Labour had expelled him for ‘voting Lib Dem’. And on 30 July, he told Labour leader Jeremy Corbyn in a letter:

I no longer wish to stay in the party, even if I should be successful in my appeal or legal challenge.

The culture you have helped to create has made the party one which I feel no longer truly represents my values, or the hopes I have for Britain.

He also criticised a supposed “culture of denial” in the Labour Party today.

Campbell, however, was a key player in facilitating the illegal 2003 invasion of Iraq. And despite the ensuing mass devastation, which helped to unleash a wave of terror around the world that we still see today, he somehow remained in the Labour Party. (Jeremy Corbyn, meanwhile, knew the invasion would be a disaster and actively campaigned against it.) So if anyone is in “denial”, it’s Campbell. Because he has the moral authority of a shrew; and any truly progressive political party would have kicked him out many years ago.

In 2016, John McDonnell tried to wake Campbell from his self-absorbed slumber, saying:

You’re the person, above all else, who actually created a political environment where no one believed a word a politician said after a bit… You lost us five million votes in that process and set us up to fail. The reason Jeremy was elected was because they wanted some honesty back in politics again.

You took us to the edge. We’re rebuilding what we can. We’re trying to restore honesty and confidence in politics again, that you destroyed.

“You’re the person, above all else, who actually created a political environment where no-one believed a word a politician said…you took us to the edge…we’re trying to restore honesty & confidence in politics again, that you destroyed.” pic.twitter.com/AvLFt85kuY

Corbyn’s Labour is honest, principled and progressive – all the things Campbell is not

As documentary maker Paul Sng told The Canary in 2018:

New Labour took for granted the working class vote in many areas; whole swathes of the country that had been neglected for decades. Even with the resurgence of the left under Jeremy Corbyn, Labour still has its work cut out to convince people in these areas to vote for a Labour government, or indeed vote full stop.

Indeed, New Labour used token progressive policies to hide the party’s shift to the right. It abandoned and ignored working-class communities; continued financial deregulation to please wealthy elites; kick-started the privatisation of the NHS; propped up the very structures which created the capitalist crisis of 2007–2008; and had a terrible foreign policy record.

Corbyn, meanwhile, has consistently been on the right side of history. He travels around the country to listen to ordinary people. His movement offers peace, integrity, and an end to disastrous and wasteful regime-change wars abroad. It pledges to stop the devastation of austerity. And it offers a truly transformative democratic vision for Britain’s future, with a green industrial revolution at its heart.

Within Labour, Campbell has long been ‘the anti-Corbyn’ in almost every possible way. And the party is now following Corbyn’s lead, becoming honest, principled and progressive – all the things Campbell is not. No wonder he no longer feels at home.