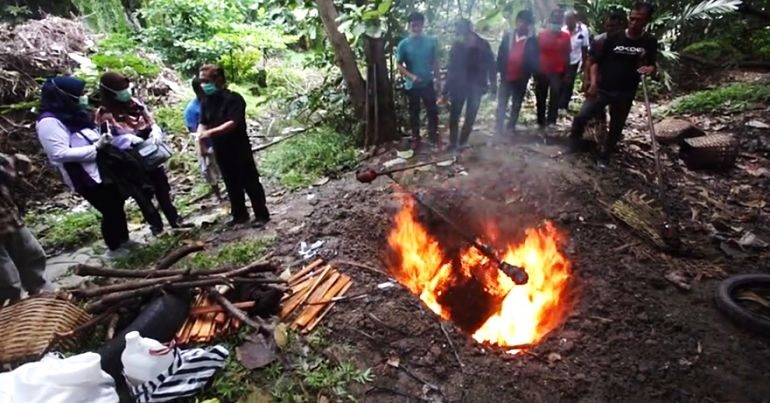 As the UK government tries to push through draconian measures to use against citizens, other global authorities are taking brutal action against the suspected ‘culprits’ of the coronavirus (Covid-19) outbreak.

It’s widely thought that the new coronavirus originated in wildlife. Researchers say pangolins and camels are carriers of coronaviruses, although not necessarily the ones related to Covid-19. It’s bats, however, that many suspect are the most likely source of the new coronavirus. So Indonesian authorities have recently rounded up and burnt hundreds of them. Although such action isn’t unusual among humankind around the globe, it’s not a humane or effective way to handle this crisis.

Traders regularly sell bats and other animals at wet markets and wildlife markets in a range of countries. The phrase ‘wet market’ comes from the fact that traders often kill shoppers’ chosen animals in front of them, before they take it home to consume.

Although early reports argued that a market in Wuhan was the probable cause of the coronavirus outbreak, later analysis challenged whether that was the case. Nonetheless, Indonesian authorities in Surakarta City, along with the Natural Resources Conservation Center (BKSDA) of Central Java Province, confiscated hundreds of bats at Depok Market. Said Romadhon, the acting head of the Department of Agriculture, Food Security and Fisheries, said:

As many as 193 bats were put into cages to be sedated. After that they were destroyed by burning

The World Health Organisation (WHO) says previous epidemics, such as Severe Acute Respiratory Syndrome (SARS) and Middle East respiratory syndrome coronavirus (MERS) may have originated in bat coronaviruses. But while media outlets assuredly tell readers bats are to blame for these outbreaks, the WHO offers little certainty that this is the case. It does, however, link civet cats to SARS and dromedary camels to MERS with more confidence.

The WHO is proceeding with similar caution on the source of the new coronavirus. It says:

Possible animal sources of COVID-19 have not yet been confirmed.

But bats are essentially an easy target. Because they appear to carry more zoonotic viruses – ones that are found in humans and at least one non-human mammal – than other mammals. One study published in Nature, for example, found that:

bats harbour a significantly higher proportion of zoonotic viruses than all other mammalian orders.

As they are also linked to previous coronaviruses, such as SARS and MERS, they are therefore a common suspect in any coronavirus outbreak.

But bats make up around 20% of the entire global population of mammals. They also play a critical role in ecosystems. For example, they pollinate hundreds of plants, disperse seeds, and devour insects that could wreak havoc on crops.

Furthermore, in coronavirus outbreaks, including the latest, other species are implicated. For the new coronavirus, some argue pangolins (or ‘scaly anteaters‘) are possibly the “reservoir hosts” of it. Some species of pangolin are critically endangered, others endangered, and the remainder are vulnerable, according to the International Union for Conservation of Nature (IUCN). They are the world’s most trafficked mammal.

In short, culling or killing the animals implicated in the spread of coronavirus threatens to further endanger already struggling species and remove critical players from our ecosystems. Amid a climate crisis, these are extremely undesirable results.

There is another option, though. Science writer David Quammen recently wrote in the New York Times that ‘we made the coronavirus epidemic’. He argued:

We invade tropical forests and other wild landscapes, which harbor so many species of animals and plants — and within those creatures, so many unknown viruses. We cut the trees; we kill the animals or cage them and send them to markets. We disrupt ecosystems, and we shake viruses loose from their natural hosts. When that happens, they need a new host. Often, we are it.

the climate crisis is resulting in tens of thousands of wild species moving into new places. It’s scrambling our migration patterns. And so that’s going to contribute to this broader phenomenon of people and wildlife coming into new kinds of contact.

Giving the natural world its space back, via reforesting and habitat restoration, is key to tackling the climate crisis. But it may also be central to limiting these types of viruses.

In short, there’s a humane and potentially effective way to reduce the risk of future outbreaks. We can give wildlife their share of the natural world back rather than perpetrating further encroachment and destruction.