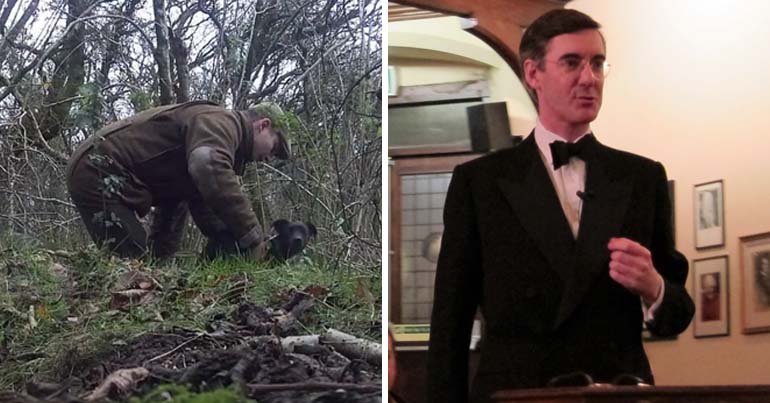 On 24 December 2019, Mendip Hunt Sabs published covert footage that it says shows a man illegally sending a terrier into a badger sett. As this happens, two riders wearing red jackets can be seen waiting in the background. This happened during a meet of the Mendip Farmers Hunt, which has close ties to local Tory MP Jacob Rees-Mogg.

The group said the footage was filmed on 7 December 2019 in the area of Ston Easton, Somerset. The video shows a man putting a terrier into what Mendip Hunt Sabs said is a “historically persecuted active badger sett”.

It shows a man first adjusting the terrier’s collar before laying down and putting the dog into the ground. He gets back up onto his knees and the dog isn’t seen again for approximately 20 seconds before the man collects it and takes the dog away. During the incident, a member of the hunt is seen watching on.

Saturday 7th December 2019 – Home Farm, Ston EastonMendip Farmers Hunt joint meet with the Croome and West Warwickshire Hunt.The MFH held a joint meet with the Croome & West Warwickshire Foxhounds at Home Farm, Ston Easton on Saturday 7th December 2019. Mendip Hunt Sabs watched the full pack of hounds, six red coats, and a field of around 20 riders leave the farm in the direction of the village hall. Immediately upon being spotted by the hunt, sabs were subjected to aggressive and intimidating behaviour from support who damaged the sab vehicle whilst using numerous quad bikes to block the public road. Fearing further damage to the vehicle and for their own safety, the sabs had no choice but to leave the area following this. Later in the day, trail cameras installed to monitor a historically persecuted active badger sett near Ston Easton captured a Mendip Farmers Hunt terreirman sending a terrier into the sett entrances. This in itself contravenes the Protection of Badger Act, however it is also clear evidence that the MFH are deliberately and illegally hunting foxes. Terriers are sent into badger setts to flush out a fox that has gone to ground or taken refuge inside. The terrier in the video footage is wearing a radio collar, used to locate them whilst underground. There is absolutely no place for terriers in a legal trail hunt. In the footage, three quad bikes arrive at the badger sett, shortly followed by two mounted hunt staff in red jackets. Two of the terriermen inspect some of the sett entrances, before one of them fetches a terrier from the box on one of the quads. The two cameras capture one of the men sending the terrier into the sett entrances whilst the red coats watch from the other side of the fence. The radio collar on the terrier is clearly visible.This clear evidence of illegal fox hunting comes as no suprise to MHS. For the past season and a half we have consistently followed the Mendip Farmers Hunt, and not once have we seen any indication of trails being laid or the hunting of anything other than live quarry. They are invariably accompanied by terriermen with terriers in boxes on their quads, and we have seen countless foxes fleeing their hounds. Last season, badger setts were frequently freshly blocked in areas in which they hunted, a practice adopted to prevent foxes from going to ground and extend the chase.We consider the Mendip Farmers Hunt to be nothing more than a floundering criminal mob, so desperate to keep the murderous truths of their activites hidden they resort to attacking our sabs and damaging our vehicle to attempt to keep our cameras away. In spite of any violence, we remain committed to exposing the reality of hunting in our community and preventing the needless deaths of innocent wild animals.To donate to keep us out in the field, please go to https://ko-fi.com/mendiphuntsabs

No place in a legal hunt

The Protection of Badgers Act 1992 specifically prohibits putting dogs into badger setts. Its exemptions for hunting were repealed by the Hunting Act. As a result, putting terriers into active setts is a criminal act.

While the practice is better known in relation to badger baiting, it also has a long history as part of fox hunting, where it’s known as ‘terrier work’. Foxes will try to escape pursuing hounds by hiding in holes, including badger setts. Terriermen will locate a fox that has escaped underground by putting a terrier into the hole and waiting for the dog to find the fox. Terriermen then follow the dog using a radio transmitting collar or ‘locator‘ and, if a fox is found, will get at it by digging down.

The Hunting Act contains a so-called ‘gamekeeper’s exemption’ for terrierwork. It’s legal for a single terrier to force a fox from under the ground. However, the fox must be shot as soon as possible after leaving the hole. However, as Three Counties Hunt Saboteurs highlight, the gamekeeper’s exemption doesn’t overrule the Protection of Badgers Act. It’s illegal to put a terrier into an active sett, and this activity would have no place in a legal trail hunt.

Mendip Hunt Sabs’ video ends with a closer view of the sett that the terrier entered, with a distinctive broken tree trunk that appears to match the one seen in the footage of the man and terrier. It shows two holes in the ground. Their location among tree roots, large size, and ‘D’ shape are characteristic of badger sett entrances.

This incident occurred during a meet of the Mendip Farmers Hunt. However, although the footage has been handed to Avon and Somerset Police, Mendip Hunt Sabs say the force has taken little action.

The sab group passed the footage on to Avon and Somerset Police via intermediaries, Somerset Badger Group and the League Against Cruel Sports (LACS). The Canary contacted Somerset Badger Group about the videos, and the group said that it “is clear [in the 7 December 2019 footage] that an individual was encouraging a Patterdale type dog into holes”. However, it also said that “proving intent is very difficult”. Furthermore, proving that the sett was active at the time of the incident is “again very difficult” without timestamped photos or videos “showing a badger using the sett”.

The Canary also contacted Avon and Somerset Police, which confirmed that it investigated the allegations. It similarly pointed out the need to prove that the sett was active on 7 December 2019. The force also said the investigation couldn’t proceed because one of the informants “was unwilling to give a formal statement”. It went on to say:

Officers explained that they would need statements from the person who installed the camera and the SD card of the original footage in order to take further action.

On 22 January officers were told by a representative of the League Against Cruel Sports that the person who installed the cameras was not willing to make a statement.

But Avon and Somerset Police said it has “filed” the case “pending the availability of further evidence (such as the original footage) and witnesses willing to provide statements”.

The Canary asked Mendip Hunt Sabs why the camera person was unwilling to come forward. It said:

They/we do not want to jeopardise future investigations by being named at this point.

However, it also pointed out that there is precedent for convictions without a statement by the camera person:

the Kimblewick Hunt were convicted of animal cruelty after a covert camera caught them dragging a fox from an [artificial earth] and throwing it before the hounds. … the group involved in placing the hidden camera… did not make a statement to the police

“This is where the foxes are”

That’s not the only incident that Mendip Hunt Sabs has captured on video, though. It provided The Canary with several videos filmed on the morning of 9 March 2019. The footage was filmed by two different cameras at another location in the Ston Easton area. It features terriermen that the group says are associated with the Mendip Farmers Hunt.

In the video, three terriermen approach the edge of a woodland with one heard saying, “This is a badger’s work, innit?” Several seconds later, a second man says “This is where the foxes are”. A second camera then shows the men digging. A minute later, one of the men voices concern over visible spade marks in the ground. Footage from the first camera later in the day, shows a red-jacketed member of the hunt visible near the wood speaking to what appears to be the same terriermen.

Mendip Hunt Sabs told The Canary that this video shows an “active badger sett [that] was blocked in the morning and the hunt came by later that day”. Their dialogue suggests the men acknowledge the presence of both badgers and foxes at the sett, as well as concern over the visibility of their digging.

The Canary attempted to contact the Mendip Farmers Hunt about both incidents but it didn’t respond by the time of publication.

The “most humane way” of fox control?

The Mendip Farmers Hunt count Tory MP Jacob Rees-Mogg as a staunch supporter. Rees-Mogg last hosted the hunt in March 2019, when several sab groups and LACS caught it leaving the MP’s home. Mendip Hunt Sabs also shared a photo of the MP that it says was taken at the hunt’s ball in October 2019:

The hunt’s own website, meanwhile, lists Rees-Mogg’s wife as a joint master during the 2012/13 season.

Rees-Mogg’s support extends beyond just the hunt to the activity itself. Labour North East Somerset uploaded a video in May 2017 in which the Tory MP says hunting is “the most humane way of controlling a fox population”.

However, anti-hunting campaigners point out that terrier work undermines this claim. LACS describes the activity as “some of the cruellest scenes to take place during fox hunting”. Undercover footage from before the hunting ban shows the reality of terrierwork. Animal Cruelty Investigation Group filmed a dig out in 1980 and it shows the horrific way terriermen treat dug out foxes.

The popular face of hunting is that of red-jacketed people on horseback using a pack of hounds to chase foxes across the countryside. This is vile in itself. But there are parts of hunting that happen in the shadows, away from the public eye, that are equally – if not more – cruel than the chase. Terrierwork is one of those things. That’s one of the reasons that anti-hunting activists dislike terriermen so much, along with the latter group’s proclivity for violence.

These activities continue today, even after the so-called hunting ban. The fact that some politicians remain closely linked to hunts makes them complicit in what’s going on in the countryside. Since the police are unable to take legal action, it once again falls to sabs to expose this despicable ‘sport’ for what it is.