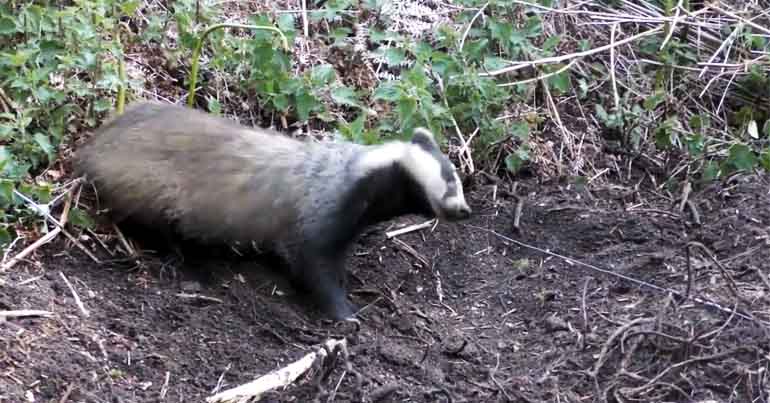 Footage captured by a group of anti-bloodsports activists shows the horrifying moment a badger is caught in a snare. And it’s a stark reminder that these cruel practices, though often legal, must be banned.

Trapped by the neck

On 15 May, the Hunt Investigation Team (HIT) published footage of a badger snared on the Moscar Lodge estate near Sheffield, owned by the Duke of Rutland. The video shows a badger named Millie struggling to escape from a snare around her neck. Also included is a clip of the group releasing Millie from her snare and carrying her away. And further footage shows a man that HIT identifies as the estate’s gamekeeper at what it says is the snare site, both before and after trapping Millie.

In its video, HIT claims the gamekeeper set the snare along an active badger run. The National Anti Snaring Campaign points out that this practice is illegal under section 11.2.b.i of the Wildlife and Countryside Act. This is because badgers are a protected species. HIT’s video suggests he is aware of this because the gamekeeper “removes all evidence of the snare” after realising someone may already have released a badger from it. However, it says a snare was later installed “just yards away” along the same run.

HIT said Millie has since returned to the countryside:

Snared badger goes home.
Young female badger released back into the wild.
The snares have been removed from Fearney Hill Plantation, SK 26958 87256 keepers will try and put them back in time. To keep these badgers and others safe, monitor this land.
Get active for wildlife. HIT. pic.twitter.com/2AoaVvkSDD

In 2017, during a previous investigation at the same estate, HIT estimated that there were roughly 400 active snares on the Moscar Lodge estate set to aid grouse shooting.

“We are aware of the incident”

HIT said it stayed in contact with the RSPCA during the incident. The Canary contacted the animal welfare organisation and it said:

We are aware of the incident and we are looking into it.

HIT also said that South Yorkshire Police had visited the gamekeeper about the incident. However, when The Canary contacted the police, a spokesperson said:

We neither confirm or deny the identity of any individual who may or may not be under investigation.

The Canary contacted Belvoir Estate, owners of Moscar Lodge, for comment but hadn’t received a response at the time of publication.

This is not the first time that gamekeepers from Moscar Lodge estate have made the news. In February 2019, local paper the Star reported that “men in balaclavas and camouflage gear” confronted two walkers at Wyming Brook Nature Reserve. This reserve is near where Millie was snared. The Star reported that the Sheffield and Rotherham Wildlife Trust believed “the men were gamekeepers from the nearby Moscar Estate” that wanted “to question the couple on suspicion of snare tampering”. However, South Yorkshire Police, who were working with the gamekeepers, apologised for the incident.

HIT also previously caught Moscar Lodge estate’s gamekeepers in a similar situation in 2017. In July of that year, BBC News published the group’s footage showing another badger caught in a snare. Although released, HIT’s report from the time says the group witnessed gamekeepers killing wildlife including badgers. This led to a police investigation although ultimately no charges were brought against anyone.

Free running snares can be legally set and are widely used across the UK. The League Against Cruel Sports estimates that, as a result, up to 1.7m animals are caught in these devices every year, and only one in four of these is the intended target.

The reality is that snares are indiscriminate. They will trap any animal passing through them. As HIT’s badger video shows – as well as a previous exposé by the group of a fox trapper in Wales – the results are horrifying. Therefore, whether legal or not, and whether the target is intended or not, snares are cruel. They must be banned immediately.