As mineral extraction endangers communities, maybe the safest mine ‘is the one that's not built’ - The Canary 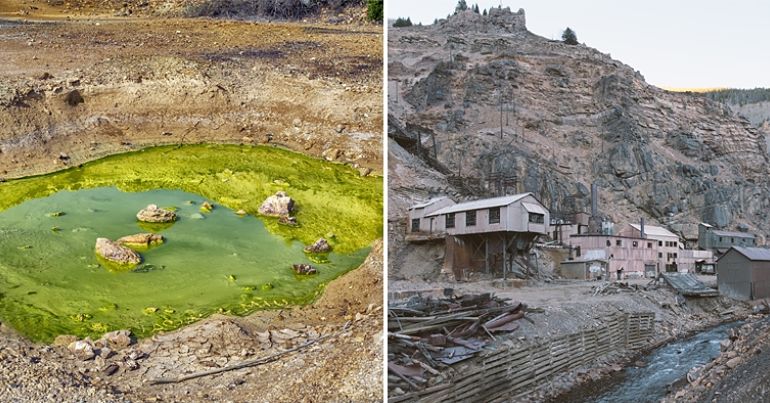 Many of the materials we use for everyday life are buried deep beneath the ground, so we mine to extract them. And we continue to do so despite the adverse effects this has on our environment.

Some of the damage mining inflicts on our communities comes from the ore waste known as tailings. The tailings waste is often stored on-site in dams after forming during the extraction process. These dams contain contaminated liquid that can leak into the local drinking supply and soil.

A leak like this occurred on 25 January 2019 when a tailings dam collapsed at an iron mine near Brumadinho, Brazil. This collapse killed 259 people and damaged huge areas of agricultural land and forests. But environment charity Earthworks is hoping that by implementing its Safety First report, accidents like this could be greatly reduced

While international standards on tailings already exist, Earthworks feels these regulations “do not go far enough to adequately protect communities and ecosystems from failures”. So it’s produced a report with “16 Guidelines for Responsible Mine Tailings Management”. The nonprofit organisation says its report:

outlines guidelines for safety, respect for affected communities, and corporate accountability that must be incorporated into any tailings standards or regulations.

And in doing so, the “document also recognizes that the safest tailings facility is the one that is not built”. 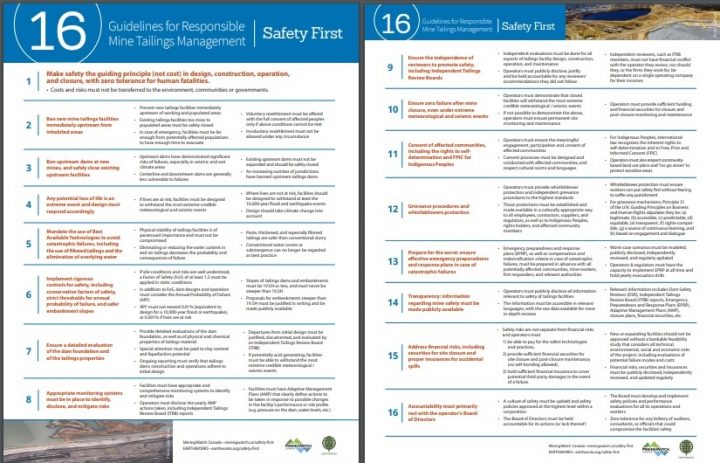 The disaster in Brumadinho was not the first of its kind. In November 2015, there was a similar disaster just 78 miles away. On that occasion, 19 people died.

Following the 2019 disaster, differing organisations, including some which have an interest in mining and international investment, assembled to set new standards for tailings. These are due out this year.

And it’s important that we get these standards right. Because damage done to people and the environment can be long-lasting and even irreversible. On 24 February, the Conversation reported:

Over the past 100 years, more than 300 mine tailing dams worldwide have failed, mainly due to foundation weakening, seepage, overtopping and earthquake damage.

This issue is especially urgent now in a region of the Pacific Northwest where Alaska and British Columbia meet. This zone, known as the Golden Triangle, is studded with mineral claims and leases. We believe that rivers in this area could be severely damaged if proposed mega-projects are allowed to proceed.

Meanwhile, Dalradian Gold Ltd’s controversial goldmine plan for the Sperrin Mountains in County Tyrone claims it won’t use a tailing dam. However, a report by Steven H. Emerman of Utah Valley University disputes this. His evaluation of Dalradian’s application highlights the dangers this dam could pose, and states:

The tailings dam for the proposed Curraghinalt Gold Project, County Tyrone, Northern Ireland, would lack the drainage infrastructure necessary to prevent failure of the dam. The proposal lacks any analysis of the consequences of failure, although there would be numerous houses within 1000 meters downslope from the dam. The predicted water consumption rate is less than 10% of gold mining standards”

We will monitor our impact on all of these measures. The mine is designed to limit the disruption to its surroundings. We will use dry stack tailings (“DST”), instead of a tailings dam or pond. DST is widely recognized as the most stable, sustainable method for managing mine tailings and allows rehabilitation to take place during operations. Read more about dry stack tailings, as it relates to building a safe and environmentally responsible mine.

And in terms of the sustainability of our planet, these trends can’t continue. The Earthworks report admits that while we may need:

to continue to mine at least some minerals, including to support the energy transition technologies, but we need the best standards and practices to do so.

The report makes it clear that we need ways to reduce our reliance on raw minerals and eliminate the use of precious metals.

As the Earthworks report states:

The safest tailings facility is the one that is not built.

The material possessions our society thinks it needs are meaningless unless we’re kind to our planet. However, capitalist corporations have failed the planet with their profit-centred approach. So it would appear that the best way to guarantee the safety of tailings is to make sure they don’t exist at all.