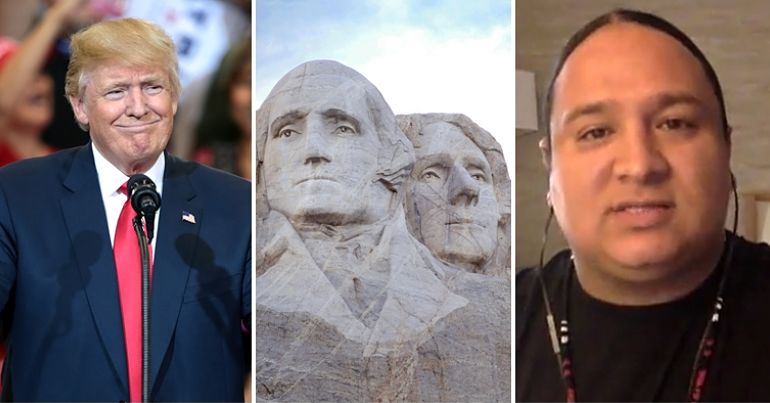 The police killing of George Floyd in Minneapolis on 25 May sparked protests and anger across the globe. Floyd’s killing reminded the world of the danger to Black people’s lives. It reminded us too that the abuse and murder of Black people has its roots in the slave trade over 400 years ago.

As a result, protesters pulled down statues of people who supported the barbaric, genocidal practice. Additionally some institutions in the US removed symbols of racism. People began to debate these symbols and statues and their association with slavery and racism.

A debate of this nature is challenging in any climate. But when it happens during a pandemic, and when the president of the US is Donald Trump, who Dr Cornell West describes as a “neo-fascist gangster”, that debate becomes beyond challenging. Since threatening Black Lives Matter protesters with the military, Trump has ordered the attorney general to prioritise prosecuting people who vandalise statues.

Trump has made his disdain for anti-racism clearly known, as he originally chose to hold a MAGA rally in Tulsa, Oklahoma on Juneteenth, an African American celebration of the end of slavery in the US.  He was later forced to change this date.

And now, he’s taken yet another step to demonstrate his disrespect for oppressed people. Because he’s spending 4 July celebrations at a site scared to Indigenous people in the Black Hills of South Dakota. And it’ll be in front of:

the faces of four white men, who were colonizers, who committed genocide against Indigenous people.

While most people may call this sacred land ‘Mount Rushmore’, its Indigenous name is He Sápa. And it’s an area sacred to the Lakota people. Indigenous tribes have told Trump he does not have permission to hold his celebration there. President of the Oglala Sioux Tribe Julian Bear Runner said Trump “is not permitted to enter the treaty territory at this time”.

He Sápa is famous for the sculptures of four US presidents on its face. Gutzon Borglum directed the sculpting of the faces of George Washington, Thomas Jefferson, Abraham Lincoln, and Theodore Roosevelt into the mountain top between 1927-1941. Borglum had associations with the Ku Klux Klan.

In 1868, the Fort Laramie treaty protected this land as Indigenous land. However, owing to the gold rush in the following decade, matters took a turn for the worse. Gold miners entering Indigenous land demanded military protection.

In 1876, the Lakota and Northern Cheyenne people were victorious at the Battle of Little Bighorn. But by the following year, the US government had begun the practice of starving them off their land. Then by the autumn of 1877, US federal agents had forced the Lakota people onto reservations and had confiscated their land.

The NDN Collective, an organising group for Indigenous peoples, believes in building:

the collective power of Indigenous Peoples, communities, and Nations to exercise our inherent right to self-determination, while fostering a world that is built on a foundation of justice and equity for all people and the planet.

On 2 July, in an interview with Democracy Now, its president and CEO Nick Tilsen described what He Sápa means to his people. Tilsen said He Sápa:

is the place that we connect to creator. It’s the place we go pick our medicines. Our people have been traveling there for thousands of years in following the actual star constellations to go to our sacred sites at different times, and so this place is very, very sacred to our people.

And so, the act of, one, stealing our land, and then carving the faces of four white men, who were colonizers, who committed genocide against Indigenous people, is an egregious act of violence.

And while all four of these US presidents could be held responsible for acts of murder or brutality against Indigenous people, Tilsen singled out one in particular:

I mean, people talk about Abraham Lincoln as being one of the better presidents in the history of the country. Well, you know, people don’t realize that, on one hand, he signed the Emancipation Proclamation, and then he also ordered the largest mass hanging in the history of the United States, when he ordered the hanging of 38 Dakota people after the uprising in Dakota territory in southern Minnesota.

Tilsen believes it’s important people know about this because:

this is an act of violence and aggression against us, and it’s also pushing this falsehood narrative about American democracy, when we actually really should be uplifting the truths of what happened throughout history and how those truths are directly connected to the disparities that exist today in society amongst Indigenous people.

Just to rub salt into the wound…

Indigenous people in the US and around the world have been hit hard by coronavirus (Covid-19). Prior to the pandemic, they already had poor access to healthcare. So it’s really utterly disgusting that the South Dakota governor, Republican Kristi Moen and an ally of Trump, said:

We will have a large event at July 3rd. We told those folks that have concerns that they can stay home, but those who want to come and join us, we’ll be giving out free face masks, if they choose to wear one. But we will not be social distancing.

Throughout the entire pandemic to date, Trump has refused to wear a face mask.

Additionally, this event includes fireworks on the sacred land despite the fact they’re banned. A national park services employee described the idea of setting off fireworks as “insane” because of the danger it poses. Editor of Wildfire Today Bill Gabert told NPR:

The Black Hills generally is a tinder box this time of year, and right now, they’re in a drought.

The fact that some US presidents attempted to improve relations with and conditions for Indigenous people is irrelevant. And it’s nowhere near enough given the butchery Indigenous people have suffered at their hands.

The leaders of the US need to hold a long process of healing with the Indigenous people. And ideally reparations should follow. But past experience of how the US administration treats Indigenous groups doesn’t inspire hope. However, at the very least, US authorities could cancel their independence day celebrations on sacred Indigenous land, leaving Indigenous peoples to exercise their “inherent right to self-determination”.