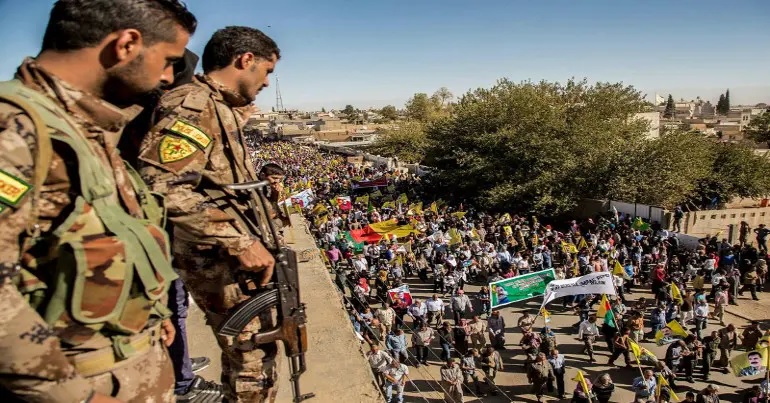 Terrorism charges against three British men, Dan Burke, Paul Newey, and Sam Newey, have been dropped after what has been described as an “extraordinarily misplaced prosecution”. The three appeared by video link at the Old Bailey on 3 June.

Burke was imprisoned back in December on remand on charges, one related to an allegation he helped Dan Newey travel to fight with the People’s Defence Forces (YPG) in northeast Syria (aka Rojava). The YPG was one of the key forces which defeated Daesh (ISIS), and a strategic US-ally until recently. Over 11,000 fighters lost their lives fighting Daesh during the conflict.

Burke, who also fought with the YPG, has been locked up during the height of the coronavirus pandemic, putting his life at risk.

Paul Newey was being prosecuted for supporting terrorism after sending £150 to his son, Dan Newey, who is currently volunteering with the YPG. Sam Newey is Dan’s brother, and his charges related to helping his brother fill out a form on the internet.

Resistance to war crimes being classified as terrorism

It was an extraordinarily misplaced prosecution. The support for the YPG should never be classified as terrorism. Mr Paul Newey’s son, who went out to fight, went out to resist the commission of war crimes and, in particular, the crimes of ethnic cleansing and aggression that the Turkish state was committing by invading Syria. These war crimes were themselves condemned by the Foreign Affairs Committee of the UK, France, Germany, the EU, the House of Representatives in America, and it is a bizarre world we live in if resistance to such war crimes becomes classified as terrorism.

It unfortunately takes place in the context of a century-old betrayal of the Kurdish people, who were promised a homeland following the collapse of the Ottoman Empire, which was then taken away from them, and it’s hard not to be cynical about the motivations for prosecuting these three men, at a time when the YPG had exhausted their usefulness as an auxiliary force. And perhaps our relationship with Turkey has come to play a more significant role in the decision to prosecute than it should do.

In the middle of all of this, Mr Paul Newey has had his life destroyed, has been vilified internationally as a terrorist, and has barely held onto his job and relationships. It should never have happened.

If found guilty, Paul Newey could have faced up to 14 years in prison.

We are delighted the charges against Daniel Burke and the family of Dan Newey have been dropped. These politically-motivated prosecutions now join many failed cases the CPS have levied against British citizens for volunteering with the YPG, YPJ and Syrian Democratic Forces (SDF), indispensable allies in the fight against the Islamic State

Both civilian and military volunteers in Rojava are targeted by the British state without ever being formally charged. Their passports are confiscated for years, their movements and political activities monitored, and they are routinely detained and questioned under Schedule 7 of the Terrorism Act.
Despite the enormous sacrifices made by the YPG, YPJ and SDF to defeat ISIS, the British state’s use of terror legislation against British volunteers smears the Kurdish-led force itself as a terror organisation. Targeting civil volunteers in Rojava is an attack against the region’s unique democratic, feminist and ecological political system.

Kevin Blowe from The Network for Police Monitoring said:

While it’s great news the charges in this case have been dropped, this case should never have been prosecuted in the first place. An innocent man has spent months on remand, and others have lived with the stress of imprisonment and serious charges hanging over them.
Travelling to, or supporting those who travel to, Rojava is solidarity, not terrorism. These abusive charges will, however, come as little surprise to the Kurdish community in Britain. They are regularly targeted as terrorists for their support for the Kurdish freedom movement.
The British state needs to stop using flimsy or non-existent evidence to target marginalised communities and campaigners who offer support to them.

The YPG is not a proscribed terrorist organisation in the UK. The defence are pushing the CPS to give a reason why it brought the case, imprisoned a man for seven months, and then dropped all charges. A further hearing will take place in one week.
Featured image via Kurdishstruggle/Flickr