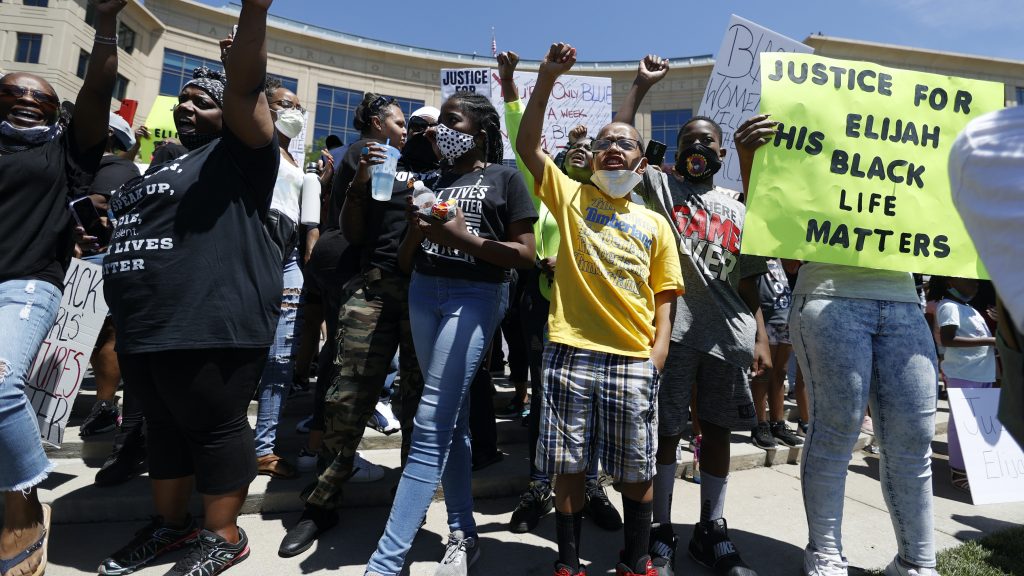 Three officers have been fired over photos showing them re-enact a chokehold used on Elijah McClain, a 23-year-old Black man. Police stopped McClain on a street in Denver and put him in a chokehold, which eventually resulted in his death.

One of those sacked is Jason Rosenblatt, a white officer who helped stop McClain in August 2019 for wearing a ski mask and “being suspicious”.

Police put McClain in a chokehold, paramedics injected him with a sedative, and he suffered cardiac arrest before later being taken off life support.

Aurora interim police chief Vanessa Wilson told reporters that officers sent the offending photos to Rosenblatt and others two months after McClain died, to “cheer up a friend”. They did not explain who that friend was. Rosenblatt responded with a text saying, “Haha”.

Officer Nathan Woodyard, who put McClain in a chokehold, also got the photos but he was not disciplined because he did not respond.

“We are ashamed, we are sickened, and we are angry”, Wilson said. The officers may not have committed a crime, but the photographs are “a crime against humanity and decency”, she added.

McClain’s killing has become a rallying cry amid Black Lives Matter protests and a national reckoning over police brutality and racial injustice. The state has reopened the case for possible criminal charges and federal officials are looking into a civil rights investigation.

In several places, the chokehold has been banned and other police reforms passed after nationwide protests.

Those responsible for McClain’s killing still haven’t been punished

McClain’s family, friends, and community activists noted during a rally that justice was swifter for the mocking photograph than the use of force that led to McClain’s death. The two other officers who stopped the young man are still on the force. Authorities are looking again into possible criminal charges against them after clearing them last year.

Rosenblatt got fired not for killing Elijah, not for murdering Elijah, but for making fun of Elijah…

That is the culture that we’re fighting, where a police officer can murder a Black man, a Black child, and keep his job and stay on the force so he can go make fun of this child.

Officers Kyle Dittrich, Erica Marrero, and Jaron Jones — none of whom confronted McClain in August — smiled and mockingly placed each other in a chokehold in the photos taken in October 2019 near a memorial for McClain.

An officer reported the photos to a sergeant late last month, and an internal investigation began. Rosenblatt, Dittrich, and Marrero were fired for conduct unbecoming of an officer. Jones resigned earlier this week.

The Aurora Police Association called the investigation “a rush to judgment”. The union for officers said on Facebook that the investigation took nine days, while a standard internal affairs case takes months. Several police agencies have taken swift action to punish officers, including those involved in George Floyd’s killing on 25 May in Minneapolis which ushered in global demonstrations.

For McClain’s mother, Sheneen McClain, “it was just devastating to see that people were mocking the murder of her son”, family attorney Mari Newman said. She added:

The fact that three on-duty, in-uniform police officers thought that it was appropriate to reenact the murder, jokingly, shows that the department is rotten to the core

The officers stopped McClain, a massage therapist, after a 911 call on 24 August 2019 reported him as ‘suspicious’ because he was wearing a ski mask. He begged them repeatedly to let go of him, according to body-camera video.