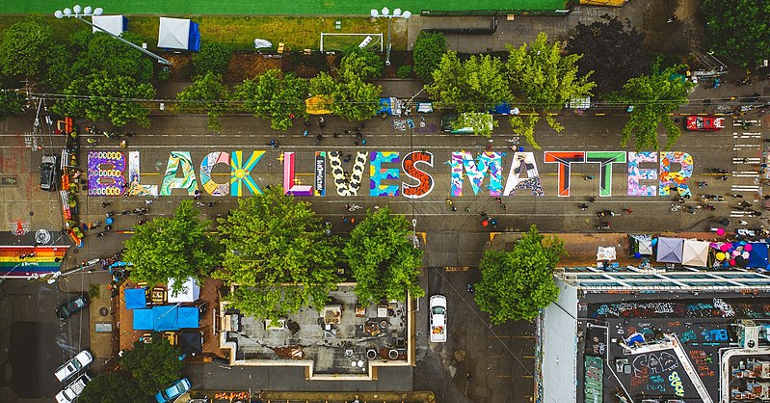 Two women are in serious condition in a Seattle hospital after a man drove into them at high speed during a Black Lives Matter (BLM) protest. The women were part of a crowd which had blocked and closed a Seattle freeway in the early hours of 4 July. The devastating video of the hit and run was circulated on social media.

Police did press briefing @ 4am about the hit and run on I5 during the #seattleprotest this morning. I’m surprised anyone lived.

According to reports from the scene, Seattle Police, and the Washington State Patrol, the driver sped onto the freeway likely via an off-ramp and sped through the crowd at high speed. SPD reported the vehicle appeared to be occupied by multiple people and was pursued by a second car after the terrible crash. There were unconfirmed reports of gunfire during the pursuit.

Seattle residents have been blocking the highway and protesting on the streets for weeks. The Canary’s Tom Coburg previously reported on the setting up of the city’s Capitol Hill Autonomous Zone (CHAZ). He explained that:

CHAZ was declared following attacks by police against peaceful protesters. The protesters were demonstrating their support for Black Lives Matter in the wake of the brutal killing by a police officer of Black man George Floyd.

But on 1 July, police in riot gear raided CHAZ, clearing the area:

‘This is what emboldens hateful white supremacists’

As BLM protests in the city continue, more footage has been circulating of the police attacking protesters, while one activist accused police actions as emboldening white supremacists:

This is what emboldens hateful white suprematists to plough their cars into peaceful protesters. #BlackLivesMatter #seattle https://t.co/qbTJMIhDr9

Moreover, this isn’t the first time that protesters have been targeted by a driver. Capitol Hill’s local media reported that in early June, a man sped at a demonstration before shooting a protester.

But despite shootings and mass arrests, protesters are going nowhere. As demonstrations continue on 4 July, the US’s Independence Day, activists are holding a ‘4th of YouLie’ teach-in to “shift the narrative”. Africatown organiser Fynniecko Glover stated:

Fourth of July depicts the independence of the United States — not everybody was free. Our people of African descent weren’t free, were still slaves in that time…

So the July 4th, the Fourth of YouLie, is just saying that not all of us were free.

Protests continue around the world

While the UK mainstream media is busy focusing on pubs and theme parks reopening, BLM demonstrations continue around the world. Hundreds have rallied in Tallinn, Estonia, while activists have built barricades in Portland, US. And in London, people have headed to the headquarters of companies Serco and G4S to protest immigration detention.

There are nine active UK immigration removal centres, and a number are run by firms including G4S and Serco. As The Canary previously reported, “the UK is the only country in the EU without a time limit on detention, meaning immigration detainees can be held indefinitely”.

Outside the companies’ headquarters, people made themselves heard:

The BLM mass movement shows no sign of ending. And it won’t slow down – not until protesters are listened to and their demands are met.