As councils could be forced to put homeless people back on the street, a property management company gets a £4.5m rent holiday - The Canary 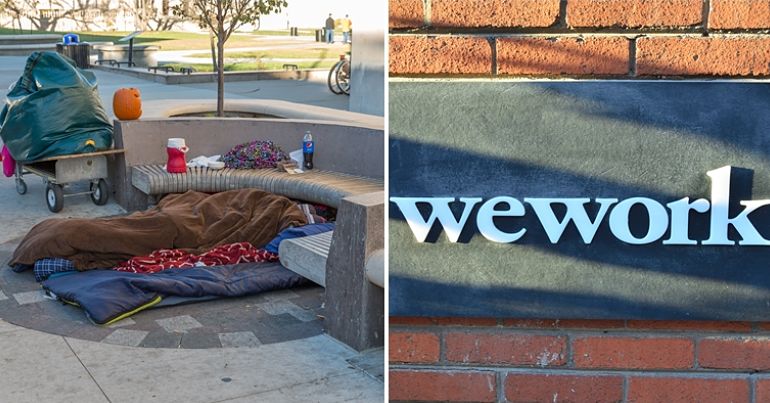 An investigation by the Bureau of Investigative Journalism (BIJ) has revealed how government policy could put thousands of homeless people back onto the streets during this pandemic. This could happen as the government is telling councils in England to treat homeless people from outside the EU differently to those from within.

Meanwhile, a separate investigation from BIJ reveals how Spelthorne council in Surrey gave property management company WeWork an 18-month rental holiday. This ‘holiday’ means the company won’t have to pay £4.5m rent to the council until after the 18 months end. That’s assuming of course that WeWork survives that period given its current woes.

Both of these investigations come at a time when the public wants restrictions placed on corporations in receipt of cheap credit that’s funded by the taxpayer. And both highlight continued inequality under the Tories.

Prior to the coronavirus (Covid-19) pandemic, homelessness charity Shelter said:

280,000 people in England are homeless, with thousands more at risk

Shelter’s extensive analysis of official rough sleeping and temporary accommodation figures, along with social services records, shows that in one in every 200 people are without a home. For the first time, its review of government data has also exposed that close to 220,000 people in England were threatened with homelessness in the last year.

As coronavirus spread, there were calls for action to help homeless people and rough sleepers. On 17 March, the Ministry of Housing, Communities & Local Government (MHCLG) announced £3.2m to help rough sleepers to self-isolate. This was on the same day that chancellor Rishi Sunak announced £350bn to support business.

Homelessness campaigners said the government needed to ‘go further’ to help rough sleepers because self-isolation isn’t feasible. Then later in March, MHCLG announced its ‘Everyone In’ programme to house rough sleepers. This would ensure rough sleepers had a roof over their heads during the pandemic.

But yet again there appears to be another twist against rough sleepers. Because, according to BIJ’s investigation:

councils in England have been told to decide on an individual basis whether to accommodate people with NRPF [no recourse to public funds], without using government public funds.

NRPF is a condition the government imposes on someone due to their immigration status. It doesn’t mean the person is in the UK illegally but means they are ineligible for public funds. This can happen even if they have lived in the UK for a number of years. One man featured in BIJ’s investigation has lived in the UK since 2003 and has a daughter here too.

In order to qualify for public funds the person must get indefinite leave to remain. But to get this you must have lived in the UK for at least five years. Additionally, you’ll have to pass a “Life in the UK” test and an English language test, and pay a fee of £2,300.

NRPF status could therefore throw thousands of people back onto the street. Meanwhile, WeWork gets a £4.5m rent holiday.

Yet big businesses were bailed out through the Covid Corporate Financing Facility CCFF. This facility helps “larger firms” with cash flow problems. But at least now it seems as if the public is fed up. A recent study by non-profit research and campaigning organisation PositiveMoney showed some people are not prepared to tolerate the government’s bankrolling of big business anymore. The study revealed:

63% of respondents said large corporations should only be given financial support if they agree to certain environmental and social conditions, such as cutting carbon emissions and protecting workers’ jobs.

Since the pandemic began and the UK government announced support measures, it was clear who would be the biggest benefactors. And unsurprisingly for a Tory government, it was ordinary and vulnerable people who were left out.

As reported by The Canary, many thousands of people have been left out of the government’s furlough scheme. This scheme allows UK employers to keep their staff on payroll, even if they can’t work, during the pandemic. But the voluntary nature of the scheme meant employers didn’t have to offer it. This meant they could simply let their employees go with no pay. Moreover, some workers weren’t covered by the scheme – meaning they had no choice but to work during the pandemic, if they didn’t want to face destitution.

The Canary contacted MHCLG for comment. An MHCLG spokesperson said:

Our rough sleeping taskforce has one overriding objective – to ensure as many people as possible who have been brought in off the streets in this pandemic do not return to sleeping rough.

That’s why we’ve ensured councils across England can support vulnerable rough sleepers from EEA countries. Councils are also able to provide emergency accommodation for foreign nationals where they are in the UK lawfully.

The £105 million announced last week will mean councils are able to continue to provide safe accommodation to vulnerable rough sleepers, help break the cycle of homelessness, and continue our work to end rough sleeping for good.

The Canary contacted the Labour Party for comment, but it had not responded by the time of publication.

As reported by The Canary, Spelthorne Council was exposed due to its investment in commercial property. The investment came about as a result of Tory cuts to local councils. They, too, are feeling the pressure of meeting the basic needs of the public and the needs generated by the pandemic.

This Tory practice of favouring the rich over the poor and vulnerable has been the party’s trademark. It’s not new to this pandemic. And the findings of the BIJ investigation underline how dangerous that is in the midst of a pandemic. It’s a time when we should have real solidarity, not just words. It might be a stretch to hope the Tories will ever change, but at least there is hope that some people will no longer tolerate it.