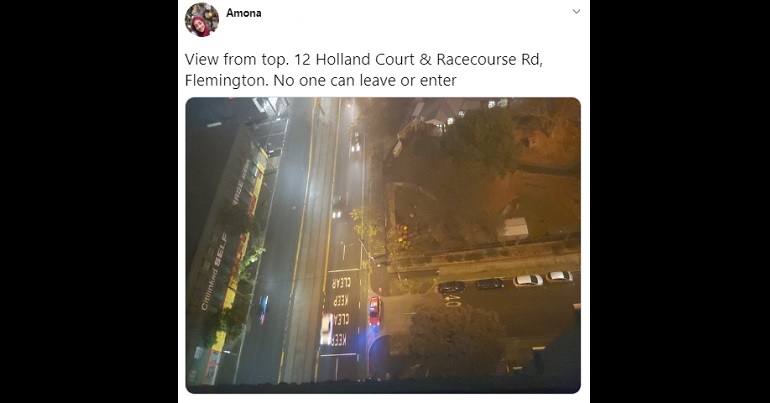 Authorities have locked down nine public housing tower blocks in an Australian city in a bid to stem a spike in coronavirus (Covid-19) cases. Armed police are on site and reportedly patrolling each floor to keep residents inside But people are saying that this approach is “racist“, a “gross exercise of power“, and turning people’s homes into “prisons“.

At the time of publishing, the state of Victoria had recorded 108 new coronavirus cases in 24 hours. 9 News reported that it was the biggest rise since March. So the state’s premier Daniel Andrews ordered the lockdown of around 3,000 people living in 1,345 homes across nine tower blocks. The housing complexes are located in the Flemington and North Melbourne areas. SBS News reported that Andrews said in a statement that the nature of tower blocks meant the virus could spread like “wildfire”, and that:

We have sufficient evidence to take these steps. They’re not taken lightly.

We at no point underestimate how challenging this will be for families and businesses, particularly families, many of whom are vulnerable in those public housing towers, but for their safety and safety of all Victorians this is the right approach.

Andrews claimed that there were 23 new coronavirus cases in 12 households across the nine buildings. So the authorities sent police to the tower blocks, which are the equivalent of council or social housing in the UK, to enforce the lockdown:

BREAKING: Police are arriving at the housing commission estates in #Flemington – this is one of nine estates to be immediately locked down, after revelations 23 people have tested positive for COVID-19 from 12 separate families. ⁦@7NewsMelbourne⁩ pic.twitter.com/BF04JN4rZ9

Reports came in that police would be present on each floor to enforce the lockdown. But people on social media were unhappy with the move:

What’s unfolding in Melbourne right now is horrific. A punitive Covid response that singles out & targets the most marginalised is no response at all. Public housing tenants should not be subjected to this.

Can Vic Gov somehow commit to job assurances for the people now locked down in those towers with precarious and mostly casual low-income jobs? Can they assure an extension of the Jobkeeper for the childcare workers in there? Not just feed them? If not, this will end fucken badly.

There are several major issues surrounding the lockdown in Flemington.

As the Victorian Council of Social Service noted:

Some public housing tenants have fled war or family violence. Some are dealing with mental health challenges. Many don’t speak English as their first language. Many others work casual or insecure jobs.

This lockdown will scare many people, and trigger memories of past trauma.

There have long been concerns about overcrowding in the blocks, which often have shared laundry facilities and small units.

To be eligible for housing assistance, people are usually on low incomes or live with disabilities.

Lawyer Paul Kidd pointed out that some residents may be drug-dependant or in rehabilitation programmes. He also noted how:

There will probably be women in those flats who are now stuck in an apartment with their abusive partner, who will be coming down off drugs or alcohol addiction, off their meds, etc. I just hope nobody dies.

Others noted that there seemed to be elements of classism in premier Andrews’ decision:

In Fitzroy North, tonight, I could go for dinner with 8 friends. 10 minutes drive away there are people in public housing with police in the corridor stopping them from leaving for any reason. This is horrendous. https://t.co/qdk6g25VfV

Jim Malo pointed out that back in March, rich people who had been skiing in Aspen, US brought coronavirus back and spread it around the wealthy Victorian suburb of Toorak:

Really don't want to be that guy but they never would put a cop on every street corner in Toorak, Brighton, et al, even though we had a coupla super-spreaders come back from aspen with the virus. This is beyond fkd https://t.co/9E2vbnAoP2

Meanwhile, a walk away from the tower blocks is Flemington racecourse, which on Saturday 4 July had a ‘race day’ going on. So it seems a stone’s throw from poor people being locked down, richer people can enjoy the races. But there’s also another element to the story. And it’s where the outbreak came from.

Journalist Megan Clement is currently quarantined in a hotel at Melbourne airport. She put out a long Twitter thread on what she’s seen. In short, she believes that the rise in cases seen in Victoria is due to poor lockdown measures at the airport and hotels around it. As she wrote:

I am currently in the Melbourne Airport Holiday Inn on day 12 of hotel quarantine. I am here because of a family illness. It’s an awful situation. But I feel I have speak up after these latest developments in Victoria.

There have been reports since last weekend that security staff are untrained in infection control and are unwittingly spreading COVID-19. We know the hotels are the source of much of this outbreak. Yet nothing has changed here, in fact it’s gotten worse.

Here’s what I’ve seen:
*Security guards without masks or gloves.
*Holiday Inn staff without masks or gloves.
*Guards lacking training on how to dispose of PPE (at one point I was asked by an unmasked supervisor to put used PPE into a guard’s hands rather than the dedicated infectious waste bin).
*Guard numbers have been cut in half from 4 per floor to 2.
*Staff members (not guards) have told me they are moving between different quarantine hotels for shifts.
*External guests are checking into the hotel and it is still bookable online…
*Fresh air breaks have been cancelled since last weekend.

I wonder how many ppl in these towers are essential workers, people who have been doing undervalued and underpaid work (eg, cleaning) which is all the more dangerous now. #flemington #COVID19

And Clements appeared to provide an answer:

3,000 people locked in public housing and yet staff are STILL not wearing PPE at the source of the outbreak. Staff moving between quarantine hotels, external guests being booked in. What is going on. https://t.co/7o37FCMgL1

on June 9, Victoria had a day with zero new cases – community transmission was very close to being eliminated, just like every other state
then we learned 30pc of hotel quarantine arrivals weren't getting tested, and staff weren't trained in infection control, and now we're here

One rule for one…?

Stories from residents were already starting to emerge on social media. Amona Hassab, who appears to live in one of the tower blocks, tweeted about two people she had spoken to:

A Flemington resident wanted to go purchase medical supplies but was confronted & questioned by police. They asked her if she could handle 5 days without it. So much for "…we will supply you with everything you need…"

Another Flemington resident has a son with autism and told police he needs to be outdoors a few hours a day, he also has a carer who now cannot see him and she doesn't know what to do

So it seems that despite the spike in cases potentially not being the tower block residents’ fault, Victoria’s administration is forcibly locking them down anyway. It also seems that it’s one rule for the wealthy, and another for the poor in this instance. The Canary will be monitoring this developing story.