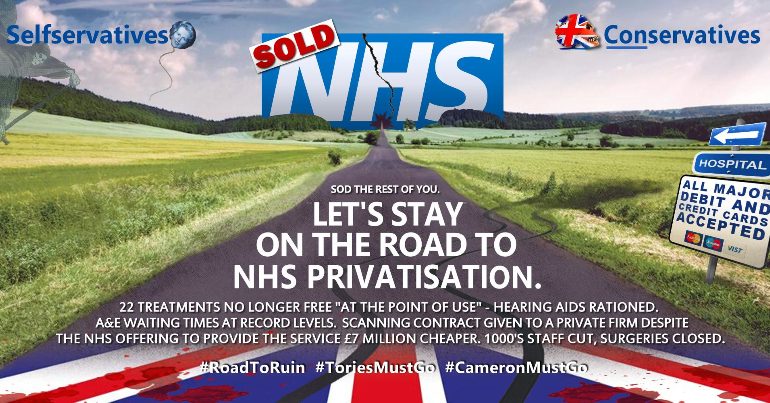 Tory MPs have defeated an attempt to protect the NHS from the effects of a UK-US trade deal. This provides definitive proof (as if any more were needed) that the Conservative Party under Boris Johnson’s leadership doesn’t care one iota about the NHS’s founding principle. And it’s not just ‘free-at-the-point-of-need’ that is at stake.

The US trade deal could affect the UK’s healthcare system in all manner of ways, and none of them for the better. Given the strong public support for the NHS, this highlights the Conservative Party’s degeneration into an increasingly far-right party under Johnson’s leadership and even raises questions about the validity of the UK’s claim to be a democracy.

On 20 July, parliament voted on an amendment to the Trade Bill, which sets out the terms of a future trade deal with the US. Labour MPs had introduced the measure as a way to protect the NHS’s status as a public universal healthcare system. If passed, it would have prevented parliament from signing on to any trade deal with the US that “undermines or restricts” this principle. But the amendment was defeated after Tory MPs voted against it.

They claim that the measure is unnecessary since they’ve always been adamant that the NHS will not be ‘up for grabs’ in any negotiation. But there is serious reason to doubt their sincerity. Because, as the old saying goes, ‘actions speak louder than words’.

US president Donald Trump himself, for example, indicated late last year that the NHS would, in fact, be included in any potential trade deal with the UK. He later tried to row these comments back. But his sincerity is likewise seriously questionable given that his own Republican Party has been staunchly opposed to even the modest reforms proposed by the rival (and largely centre to centre-right) Democratic Party, let alone a public universal system like the NHS.

Johnson, meanwhile, himself wrote an article in 2004 for the Telegraph in support of a switch to a US-style private insurance healthcare model. This should come as no great surprise given that privatising the NHS by stealth has always been a political goal of the Thatcherite wing of the Conservative Party.

During her time as prime minister in the 1980s, Margaret Thatcher in private expressed a desire to move the UK toward a US-style private insurance system. She was talked out of the idea, however, by Tory moderate Kenneth Clarke. But following Johnson’s purge of him and other ‘moderate’, pro-remain Tory MPs, this wing of the Conservative Party now scarcely exists.

Perhaps most worryingly, the amendment also contained a clause to ensure the UK’s ability to control its own pricing of medicines. As The Canary has previously reported, the US has much higher drug prices than any other developed country. And the reason for this is that its private health insurance companies do not have the same leverage, nor the same incentives, as governments do when negotiating prices with the drug companies.

All of this leads to a central question: if Tory MPs were as committed to protecting the NHS as they claim, then why wouldn’t they want to show it by deed rather than empty words? Shadow trade minister Bill Esterson, who introduced the amendment in parliament, answered this question straightforwardly:

Statements alone are worthless. It is very simple: the detailed text of all agreements must include cast-iron commitments.

Because it is not just the prime minister who wants to hand over our NHS to the healthcare corporations; it is his friend the US president, and it is in the US negotiating objectives, which refer to ‘full market access for US products’.

There is also a cruel irony to all of this. Because during the campaign for the referendum on EU membership, Johnson’s pro-Brexit group used a disingenuous slogan, famously displayed on the side of a bus, that claimed that leaving the EU would free up money for the NHS. Yet, in addition to this claim being completely misleading, leaving the EU has put the UK in a weaker position in terms of defending the NHS’s commitment to treatment free-at-the-point-of-delivery.

Firstly this is because the EU represents a larger trading bloc with a larger population than the UK alone, which translates into greater leverage. And secondly, because most parties in continental Europe, including many on the centre-right, support maintaining their countries’ social democratic reforms, of which universal public healthcare is a cornerstone. So by leaving, the UK is no longer negotiating trade deals alongside countries where support for these reforms spans the political spectrum. Indeed, this is no coincidence; it is, in fact, one of the major reasons why so many right-wing Tories wanted to leave the EU in the first place.

A threat to democracy

Finally to consider is the issue of democracy. Because the evidence overwhelmingly shows that the vast majority of the British public supports the continuation of the NHS as a universal public health system. Yet now this is being put at risk by a governing party that got less than 50% of the vote at the last election – and, as usual so far this century, on less than 70% turnout. In fact, the combined vote for Labour, the Liberal Democrats, the Scottish National Party and the Green Party (all of whom support the NHS) was higher than the total votes for the Tories.

Worse still, the future of the NHS is being decided in part by a foreign country – a country that is the world’s remaining superpower and consistently imposes its will on the world’s other countries. As a result of these two factors, a trade deal that undermines the NHS poses a threat not just to the NHS itself, but to the very concept of democracy as we know it.

The latest in a long saga

Clearly, this is just the latest episode in the long saga of Johnson’s dishonest and duplicitous political modus operandi. Most worryingly, he has turned his party from a broad church that included remain and pro-NHS figures like Clarke to a hardline Thatcherite and pro-Brexit faux-populist / nationalist movement that tolerates little internal dissent. Thatcher never succeeded in her goal of dismantling the NHS. But as the negotiations with the Trump administration heat up in the coming months, Johnson may well ‘achieve’ what she couldn’t.