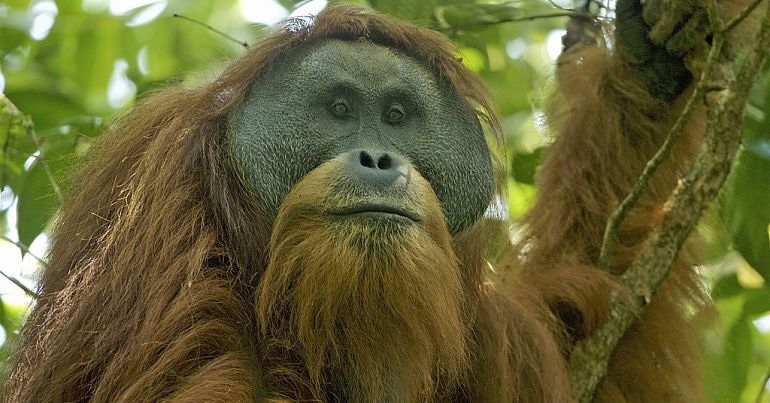 The Tapanuli orangutan – scientifically known as Pongo tapanuliensis – only gained recognition as a species in 2017. But in the same breath that researchers were excitedly uttering their name, they were also declaring this orangutan critically endangered. Studies suggest only between 750 and 800 of them exist.

One of the major threats they face currently is the construction of a hydroelectric dam. The Batang Toru project will rip through the heart of their home. But the coronavirus (Covid-19) pandemic has offered a brief and welcome respite for the world’s rarest great ape. The project developer has recently requested to delay the launch of commercial operations by three years, until 2025, due to the coronavirus crisis.

As the conservation charity Born Free points out, orangutans are “on the brink”. There are three known species, Tapanuli, Bornean and Sumatran. All three are critically endangered.

Human activities are responsible for their demise. The theft of their homes for human development is largely to blame. Born Free says they’ve lost “an estimated 80% of their habitat” over the last 30 years. Although this development is taking place in southeast Asia, namely the islands of Borneo and Sumatra, the global community – alongside the Indonesian government – is implicated in the orangutans’ predicament. Because palm oil production, timber production and mining are major threats to them. The companies linked to those activities, and the consumers of the yields, span the globe.

The illegal pet trade is another threat they face.

For the Tapanuli orangutan in particular, the Batang Toru dam development is a unique menace right now. The International Union for Conservation of Nature (IUCN)’s Primate Specialist Group – its Section on Great Apes (IUCN SGA) to be exact – has called on the Indonesian government to review the project. In a recent blogpost, the IUCN SGA’s Erik Meijaard and Serge Wich say that the dam would “separate the three subpopulations of the Tapanuli orangutan and further undermine their survival”. They argue the area the dam project is due to use is “crucial” to the orangutans’ “connectivity”. Furthermore, they warn:

The species has much declined in historic times and any further population losses would rapidly drive the Tapanuli orangutan to extinction. If the population loses more than 1% of adult animals per year, it will go extinct in the foreseeable future.

As Mongabay reported in 2019, the Sumatran Orangutan Conservation Programme’s director, Ian Singleton, said that the infrastructure needed for the dam is “massive” and will have an “irreversible impact” on the orangutans. Mongabay wrote:

He says the construction will further open the forest and increase opportunities for people to settle in the area, clear more land, and hunt. That, in turn, will increase the likelihood of conflicts between people and orangutans — a situation, he says, that rarely ends well for the orangutans

Incidents of severely injured and displaced orangutans in the area have already been connected with the project. Displacement can drive the orangutans into farming land, where they risk violence at the hands of humans.

Despite international financing of the project being less than forthcoming, due to the environmental concerns, it’s still pegged to go ahead. The IUCN SGA says that the proponents of the project – Jakarta-based North Sumatera Hydro Energy and China’s national hydropower agency Sinohydro – are making questionable claims to support their case. The IUCN SGA released a fact-checking report which it says identified:

many inaccurate and misleading statements made by the project’s developers, especially concerning its likely impact on the newly described Tapanuli orangutan species

A further report produced by energy consultancy firm Brown Brothers Energy and Environment (B2E2), and commissioned by a number of NGOs, also took on the project developers’ claims about the necessity of the dam for the region’s energy needs. In light of plans for other power plants in the area, the report asserted the dam was “wholly unnecessary to meet North Sumatra’s electricity demand in the future”.

Now, the developer has requested a three-year delay on the project because of the difficulty the pandemic has caused in Chinese workers travelling to Indonesia. Meijaard and Wich hope the surprise pause allows for a serious discussion with the Indonesian government on how to avoid the Tapanuli orangutan’s extinction. They are calling for “objective and independent studies” into the threat the dam poses to the critically endangered species. They argue:

The most threatened great ape species in the world deserves the highest level of protection. Cancelling the hydropower plans and moving the project, or an alternative option to generate energy, to another, lower-risk location, would show the world that Indonesia takes its international sustainability commitments and national environmental legislation seriously.

Meijaard and Wich are not alone either. Numerous scientists and activists have been raising the alarm over the potential environmental damage of the dam in the orangutan’s habitat.

For many of the world’s species, the pandemic has proven to be another danger in their already precarious existence. The crisis, which in itself was likely caused by humans exploiting other animals, risks the jobs and funding of the relatively few people on earth actively engaged in protecting other animals. For great apes in particular, including the Tapanuli orangutans, coronavirus poses a direct threat to their health. They share much of their DNA with humans so are at risk of catching the disease.

But the delay the pandemic has forced on the Batang Toru dam development does offer a sliver of hope for the Tapanuli orangutans. At least, it will if their evolutionary cousins – the humans – seize the opportunity the delay has provided.

Featured image via Tim Laman/Wikimedia, cropped to 770×403 pixels, licensed under CC BY 4.0