War is a racket: the arms firms turning a profit from the conflict in Ukraine - Canary 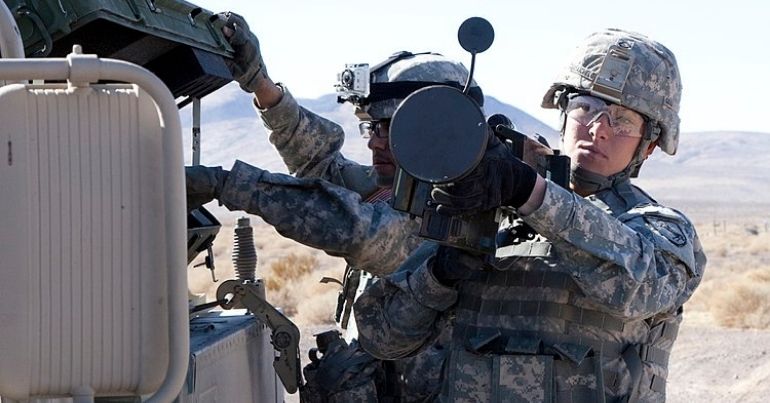 “War is a racket”. The words of major general Smedley Butler, a highly decorated United States Marine Corps officer and whistleblower. His 1935 book was an explanation of how, for industrialists, war was just another money-making opportunity. The war in Ukraine is just such an opportunity.

With that in mind, a UK-based academic has examined which firms have been making money out of the war in its first weeks. Peter Bloom, professor of management at Essex university, wrote his assessment in the Conversation. And it’s the usual suspects cashing in on the horror.

Bloom details how the firms supplying, for example, anti-tank and anti-aircraft missiles have seen profits soar in the first weeks of the war. He describes the EU’s decision to help arm Ukraine as “a major boon for the world’s largest defence contractors”.

To give just a couple of examples, Raytheon makes the Stinger missiles, and jointly with Lockheed Martin makes the Javelin anti-tank missiles being supplied by the likes of the US and Estonia.

Predictably, the rush to buy arms and ship them into Ukraine saw the firm’s shares spike:

Both US groups, Lockheed and Raytheon shares are up by around 16% and 3% respectively since the invasion, against a 1% drop in the S&P 500, as you can see in the chart below.

But the biggest spike of all was for BAE:

BAE Systems, the largest player in the UK and Europe, is up 26%. 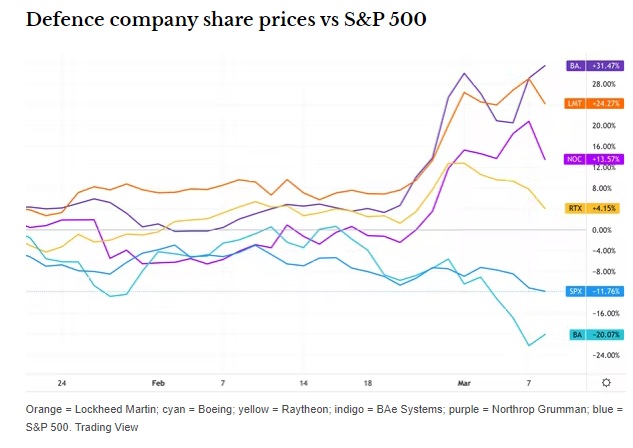 Meanwhile, according to Bloom, arms firms were briefing their investors, as early as January 2022, that instability – including in Europe – would likely benefit them financially. As the chief executive of Raytheon had it:

We just have to look to last week where we saw the drone attack in the UAE … And of course, the tensions in eastern Europe, the tensions in the South China Sea, all of those things are putting pressure on some of the defence spending over there. So I fully expect we’re going to see some benefit from it.

As Bloom explains, even before the Russian invasion, firms were predicting a global rise in arms trade profits of 7%. And it would seem as if they were even counting on such an invasion. Because the biggest ‘risk’, one consultancy warned, was that Russia would not take action:

The biggest risk to investors, as explained by Richard Aboulafia, managing director of US defence consultancy AeroDynamic Advisory, is that ‘the whole thing is revealed to be a Russian house of cards and the threat dissipates’.

This seems to suggest that arms investors and consultants were hoping the war would start, because it would boost shares prices.

Despite the horror, the Ukraine war means huge benefits for a few. Anatol Lieven, a professor of war studies at King’s College London, warned last week:

I think this crisis is a paradise for NATO, for Western staff officers and military bureaucrats everywhere. It’s back to the Cold War: You move troops around on paper; you talk constantly about defense; you spend huge sums on exercises and papers and papers and papers and more papers, but you never have to fight!

And it gets worse. Far-right elements within the Ukrainian military have possibly got their hands on British missiles.

The Azov battalion is part of the Ukrainian military and is openly fascist. Members wear fascist symbols and it’s founder Andriy Biletsky said Ukraine should:

lead the white races of the world in a final crusade … against Semite-led Untermenschen [subhumans].

It is highly likely the NLAWs pictured with Azov members were supplied by the UK. The only other donor of the equipment to Ukraine is believed to be Luxembourg, which recently sent 100.

War is a racket

War time is boom time for arms firms. This is as true in Ukraine as in any other war. What makes it worse is that among those profiting materially are some of the worst elements of Ukrainian politics. In this case, fascists.

And as we look for a way to deescalate the war, we need to consider the huge profits that are made as this brutality continues.

Featured image via Wikimedia Commons/The US Army, cropped to 770 x 403, licenced under CC-BY 2.0.