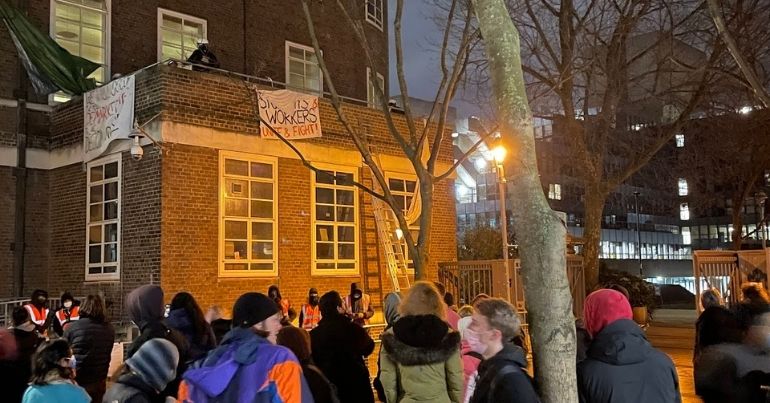 On 3 March, private bailiffs evicted students who were peacefully occupying a university building at London’s School of African and Oriental Studies (SOAS). The occupiers characterise their eviction as ‘forceful and illegal’.

The eviction came nine days into the occupation, in which students made calls for a demarketised, decolonised education system. What they mean by this, is an education system that puts the needs of staff, students, and communities before profit. And one that challenges – rather than reproduces – systems of racist, colonial oppression.

On 23 February, SOAS Strike Solidarity – a group of students – began occupying senior management’s offices in the university’s main building. The occupiers delivered a set of demands for SOAS management to implement.

The students are fighting for a demarketised, decolonised education, free from institutional racism. This begins with the removal of SOAS director Adam Habib.

On 11 March 2021, Habib used the n-word during a meeting with students. The uni boss went on to justify his use of the racial epithet in a series of tweets. Reflecting his regressive impact on the university, SOAS terminated its undergraduate African Studies programme under Habib’s leadership. Protesting students deem actions such as this to be indicative of the institutional racism that continues to function within the university.

Habib is also connected to the violent suppression of student protests in South Africa. In his role as vice-chancellor of South Africa’s University of Witwatersrand, Johannesburg, he called in private armed security and police to suppress students calling for a free, accessible, and decolonised education as part of the Fees Must Fall movement.

In 2016, South African police used rubber bullets and tear gas to suppress protesting students on campus. Police shot protest leader Shaeera Kalla in the back nine times. And on 10 March 2021, police shot and killed student Mthokozisi Ntumba outside the police-occupied university campus. A number of the students involved in the Fees Must Fall movement remain political prisoners in South Africa.

In a statement, the SOAS Strike Solidarity group said:

The SOAS student body has no illusions that Habib’s appointment at SOAS was specifically linked to his experience in repressing student movements.

Habib’s appointment at SOAS is particularly disturbing given the university’s reputation as a progressive hub of critical anti-colonial thought and radical politics. It would appear that university bosses continue to exploit this image to attract students and academics while suppressing radical political action on campus.

The student group is also protesting in solidarity with university staff who are engaged in an ongoing fight against widespread race, gender, and disability pay gaps; increased casualisation and precarity; increasing workloads and real-terms pay and pension cuts. The students are urging university management to meet the University and College Union (UCU) and UNISON’s demands, and to cut senior management’s excessive salaries.

Protesting students are also urging management to improve working conditions for SOAS workers, particularly the university’s cleaning staff. And to meet the needs of disabled students.

An ‘illegal and forceful’ eviction

On 3 March, private bailiffs and security wearing riot gear evicted the SOAS occupiers “in the middle of the night”. SOAS Strike Solidarity claims that prior to the eviction, “management only engaged in one “official” session of negotiation with the occupiers”, and failed to acknowledge all of their demands.

Upon learning about the eviction, members of the student body gathered outside the building in resistance.

The Eviction Response Team carried out the eviction – a private company which shockingly boasts “a wealth of experience when it comes to the removal of protestors, squatters & travellers”.

SOAS Strike Solidarity maintains that three occupiers sustained injuries after private bailiffs “violently dragged” them out of the building. Their press release includes an image of one occupier’s grazed back.

In a statement, the group said:

This was an illegal eviction and at no point were occupiers violent, or causing criminal damage. SOAS Management did NOT have a court order to legally carry out this eviction, and thus resorted to a cowardly private eviction in the middle of the night.

Indeed, the eviction could be in breach of Article 10 and Article 11 of the Human Rights Act, as well as Section 6 of the 1977 Criminal Law Act.

However, a spokesperson for SOAS told The Canary:

After nine days of occupation we decided that allowing further disruption was untenable and we proceeded on the basis of common law. Throughout this period, we were closely advised by legal opinion on the matter and we strongly refute the allegation that the removal of the occupiers was illegal. The removal was conducted without any physical injury and our priority was to ensure the safety and security of all involved.

We had hoped to resolve this matter through dialogue and over the course of nine days, we engaged in extensive discussions with the occupiers on the progress already made on some of their demands and work underway on others. Despite these engagements, the occupiers consistently refused to leave the premises.

The occupiers, and the overall SOAS community, is outraged at the management for carrying out this eviction in such a violent manner. It has shown the true nature of the current management—unwilling to engage in any dialogue or negotiation with the demands of a significant proportion of the student body.

The force used in this eviction was just a brief exposure of the violence on which the institution is based. This includes the violence they inflict through the exploitation of immigrant workers and Global Majority students, and the history of colonial violence on which the institution is built. SOAS management is unwilling to respond to their students’ needs and instead are only interested in protecting their profit-making institution.

In spite of their traumatic experience, the group stands firm in their ongoing fight. SOAS staff and students are protesting on the university campus on Thursday 10 March.

Resist management’s authoritarian tactics. They have bolstered security, restricted the right to protest with dignity, and ILLEGALLY EVICTED students.

PUSH BACK AGAINST MANAGEMENT AND STAND WITH US ON THE SOAS STEPS ✊🏽✊🏽 pic.twitter.com/YnwjokzQBI

The SOAS Strike Solidarity group is urging supporters to join them in condemning their forceful eviction and demanding a free and fair education system for all.