Thermobaric weapons are truly terrible, says the UK. But it also uses them. - Canary 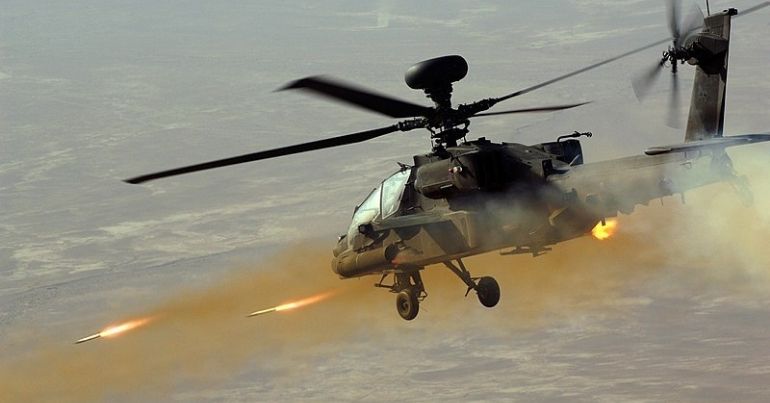 Thermobaric weapons have been used by Russian forces in Ukraine, the UK military has reported. A short Twitter video correctly explained the weapons are devastating, can destroy infrastructure and are much more deadly than conventional explosives. And it isn’t wrong.

Thermobaric weapons can literally set the air on fire, make metal burn and cause deadly organ damage to anyone in the vicinity. They are particularly deadly to civilians because the blast wave travels through buildings, making hiding very difficult:

The Russian MoD has confirmed the use of the TOS-1A weapon system in Ukraine. The TOS-1A uses thermobaric rockets, creating incendiary and blast effects.

Watch the video below for more information about this weapon and its devastating impact.

Warning: Thermobaric weapons can suck the oxygen from human lungs without impacting the brain leaving victims to suffocate to death while fully conscious.

Even if they have sought shelter below ground.

But there’s a problem here. One which many people – including the Ministry of Defence’s social media team – seems to have overlooked: the UK also uses thermobaric weapons. Though, because we deliberately renamed them, you might not realise it.

You’d be forgiven for not knowing unless you’d read a Drone Wars article from 2018. The piece details how the UK’s use of thermobaric weapons in Syria was revealed in a freedom of information request.

Not one but two types of Hellfire missile – the kind used on particular drones and Apache helicopters – have a thermobaric fill.

When the warhead detonates, the aluminium mixture is dispersed and rapidly burns. The sustained high pressure explosion is extremely damaging, creating a powerful shock wave and vacuum. Anyone in the vicinity is likely to die from internal organ damage.

And, responding to the MOD tweet, a former British Army tactical air controller showed they had also been used in Afghanistan:

Drone Wars also explained how the UK’s thermobaric weapons came to be unilaterally renamed as something else entirely:

Thermobaric weapons, sometimes called ‘vacuum’ weapons have been condemned  by human rights groups and, as the Times reported in 2008 , “the weapons are so controversial that MoD weapons and legal experts spent 18 months debating whether British troops could use them without breaking international law.”

And so in the end the British government settled on a very British response:

The ‘debate’ came to an end when a ‘Yes Minister’ solution was offered – they “redefined” the weapon as an ‘enhanced blast missile’.

Human Rights Watch has pointed out that these weapons, despite being truly horrific and particularly dangerous to civilians, are not illegal – unless used on built up areas, that is. A report on their use in Ukraine states:

And their use isn’t limited to Russia and the UK. The United States also uses them. It can be rightly pointed out that the Russian TOS launcher highlighted in the MOD tweet is a so-called area effect weapon. In short, it fires many missiles indiscriminately. But even a single Hellfire has the same effect on a smaller scale. Including on civilians.

Thermobaric weapons show up a massive contradiction in international law. The laws of war are much less rigid than we may think. They may ban the use of, for example, cluster weapons (which Russia is also reportedly deploying) but they still allow for all manner of terrible acts. Perhaps its time to review those laws, and universally ban the use of thermobaric/enhance blast weapons too.

Perhaps this would be a tiny positive which could emerge from the brutality of the war in Ukraine.

Featured image via Wikimedia Commons/Defence Imagery, cropped to 770×403, licenced under CC BY 4.0.