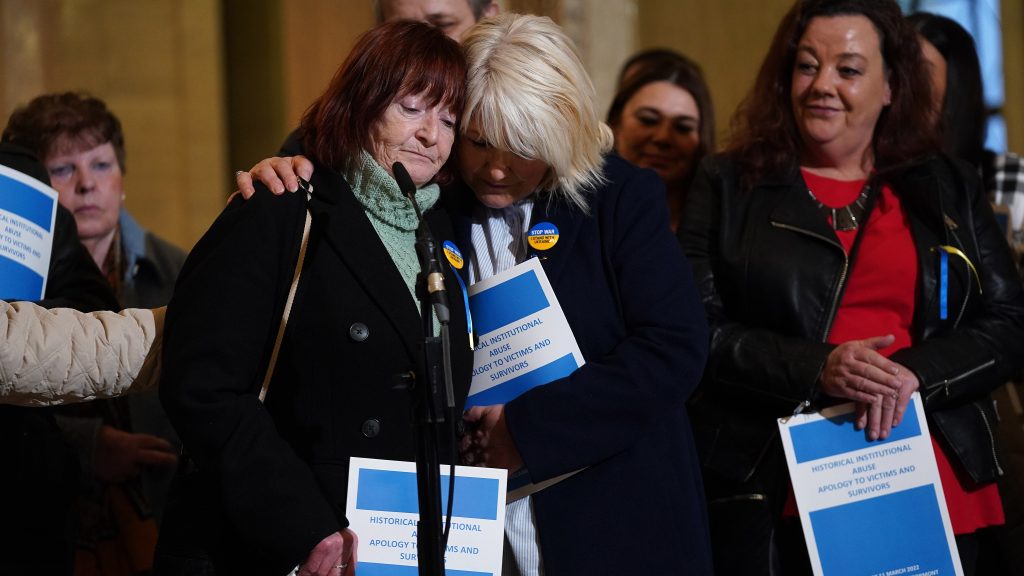 Organisations which ran the institutions in the North of Ireland where children were abused have been urged to atone by contributing to the redress fund. Representatives of six – including religious orders, Barnardos and the Irish Church Missions – offered an apology to abuse survivors.

However, survivors rejected the apology as too little, too late coming five years after it was recommended following the Historical Institutional Abuse Inquiry and decades after the former homes closed.

Jon McCourt, of Survivors North West, said he felt representatives of the institutions “failed miserably”. He urged them to demonstrate their atonement by contributing to the redress fund for survivors.

If this was the best the church could offer by way of an apology, they failed miserably,

Forget about having conversations and just start contributing to the redress fund.

The way they can put it right is to do what the religious orders have just done in Scotland and make a significant contribution immediately to the redress fund.

They delayed and were insincere

Margaret McGuckin, of victims’ group Savia, said the Executive Office “made a fool out of us” with regard to long delays in acting on the recommendations of the Historical Institutional Abuse Inquiry, adding that many victims are now “dead and gone” after the long wait for an apology. McGuckin said:

This into the 15th year of campaigning. You just couldn’t believe this, that we’d have to do this, beg and plead for someone to listen. We did that as young children.

They said here that these things happened back in the day, in the 1950s and 60s, things have changed but the way we have been treated all these years has hurt and damaged us so much.

And I can say that for myself, underneath the make-up and the lipstick I am a broken wreck… this has caused much more pain and trauma upon ourselves and life will never be the same.

The apology today was more than welcomed but we had to demand, lobby and threaten with more legal action to get to this stage. It’s unbelievable so I will not slap them on the back and say well done.

McGuckin said she believes the Stormont ministers were sincere in their apology, but not the institutions. She added:

It’s easy to read off a script, the words were easily made up, do I believe them, certainly not,

They were made and forced to come to this stage today, with the greatest respect, they are not sincere at all.

I believe the ministers were (sincere) and they felt it, but as far as the religious orders and the others, they were forced into that situation and I would take that with a pinch of salt.

This apology has come too late

Peter Murdoch, a former resident of Nazareth Lodge Orphanage, said the apology came 30 years too late for him, and he could not accept it. He described being abused over five years, and said as a child he regarded the institution “like an SS camp”.

He said his older brother, Charles, was also in the institution and suffered throughout his life with alcohol because of the experience. He died on December 1 2021. Murdoch said he has PTSD because of his experiences over the past 30 years. He said:

I have been in and out twice of prison because of snapping because of what happened to me,

Why did they not apologise 30 years ago? Thirty years ago, they hopefully would have meant it. In my personal opinion I can’t accept the apology but for anybody else it is completely up to them. My brother, if he was alive today, he would have cried.