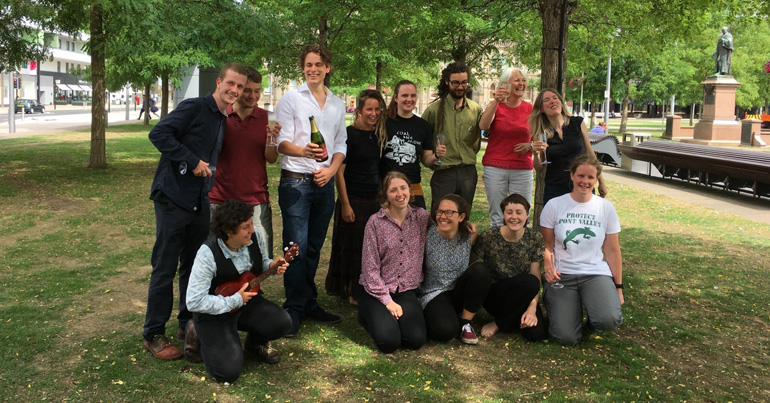 CORRECTION: This article and the headline were corrected at 2.30pm on 8 August to reflect better what was said in court.

Six people protesting a new opencast coal mine have been found not guilty of aggravated trespass at Teesside Magistrates’ Court. And they’re now saying the mining company “should be in the dock”.

Six people protesting Bradley opencast coal mine faced charges of aggravated trespass at a three-day trial from 1 to 3 August.

A press release seen by The Canary explains the charges related to actions taken between 19 April and 3 May in the Pont Valley near Dipton, County Durham. They included the use of tripods, underground tunnels and other structures to prevent work being carried out by mine operator Banks Group.

Protesters said this was to prevent a wildlife crime from taking place, following the discovery of a great crested newt on the mine site. The great crested newt is a protected species and it’s illegal to interfere with or destroy its habitat. And Banks Group was legally required to stop all work once the animal was found on its site.

Its failure to do so led District Judge Helen Cousins to conclude:

I therefore find that I couldn’t be satisfied that Banks would not have committed or be about to commit an offence contrary to the Habitat and Species Regulations. I find the offences [of aggravated trespass] not proved.

Asked why the campaign against Bradley opencast mine is important, Anne Harris of Coal Action Network told The Canary:

Banks Mining Group are an expansionist mining company. They have two other applications for new coal mines in the north-east of England. In total there is only one other for a new opencast, and that is in south Wales, and that application hasn’t progressed for a number of years. So Banks Mining Group are trying to get more out of the ground while other companies have moved away from coal. We want to be showing that there will continue to be opposition to using coal or fossil fuels.

And speaking about what happens next, Harris said:

We need to hold [Banks Group] to account. We need to make sure they’re the ones that are in the dock the next time round.

A press release seen by The Canary says one protester had a charge of resisting arrest upheld. And all defendants have received restraining orders preventing them from being within 300 metres of any Banks Group site or office.

Two other protesters charged with obstructing the highway had their cases heard prior to the start of the trial. Both had charges dropped.

A further eight people also protesting Bradley mine will be in court on 30 and 31 October.

In July, investigative media outlet DeSmogUK published a report criticising Banks Group for failing to meet planning permission more than a month after work had commenced.