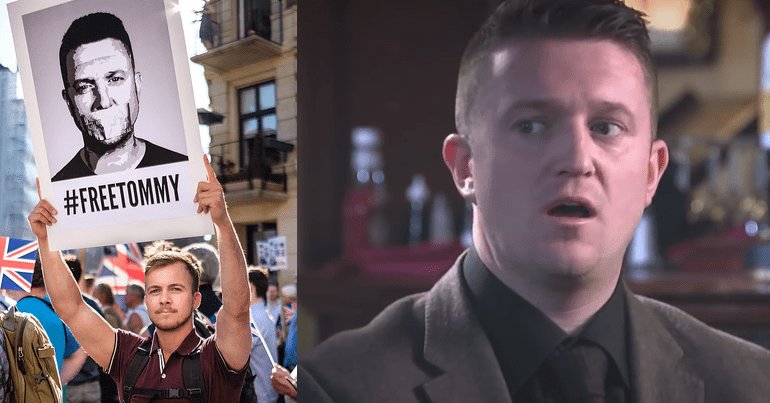 ‘Your outrage will be monetised’

Brown, who was Yaxley-Lennon’s assistant until May 2018, told the Sunday Times [paywall]:

I thought genuinely that I was joining the side that told the truth and I’ve come to realise that it’s not. It’s just about getting [YouTube] views and retweets. This is a business and your outrage, valid as it is, will be monetised as such.

Citizen donations, far-right funding and a media salary have enriched Yaxley-Lennon, as the Times [paywall] notes:

Such material has brought Robinson an affluent lifestyle, living with his wife, Jenna, and their three young children in a £500,000 house in a Bedfordshire village. The family is currently on a two-week holiday in Tenerife, the second holiday they have spent on the Canary island in the past four months.

Yaxley-Lennon’s record on sidelining morals for cash does not bode well for him. In January 2014, St Albans Crown Court sentenced Yaxley-Lennon to 18 months in prison for £160,000 of mortgage fraud. He had previously been convicted of passport fraud, assaulting an off-duty police officer, and public order offences.

“People are at breaking point”

In 2018, Yaxley-Lennon faced yet more criminal charges. On 1 August, the ex-English Defence League (EDL) leader was released from prison on appeal. He was jailed for contempt of court after live streaming outside Leeds Crown Court. ‘Contempt of court’ is when someone goes against the authority of a court. It includes actions that could prejudice an ongoing trial. For example, through broadcasting opinions about it.

Yaxley-Lennon’s supporters claim he was a ‘political prisoner’, and over 630,000 people signed a petition demanding his release. Brown said [paywall] that the narrative was “whipping people up into a frenzy… for the sake of money or fame”. The former assistant also expressed [paywall] concern that some of his supporters:

are on the cusp of acting out their frustrations against Muslims as a result. I’ve never seen this before, not in the way it’s playing out now. People are at breaking point — we must not push them further

According [paywall] to Brown, huge sums are flooding into Yaxley-Lennon’s crowdfunding page. While Brown mentioned a figure of £100,000, Hope not Hate‘s Joe Mulhall believes [paywall] that could be quite an underestimate.

Yaxley-Lennon does not just profit from citizens. Until he left Rebel Media over a money dispute last year, the far-right media outlet paid Yaxley-Lennon up to £8,000 a month, Brown says [paywall]. US tech billionaire Robert Shillman funds the Toronto-based Rebel Media and supplements Yaxley-Lennon’s salary. Shillman is on the board of the David Horowitz Freedom Centre, which the Southern Poverty Law Center describes as a hate group.

Brown described [paywall] Yaxley-Lennon’s brand as “panto journalism”. She also said [paywall] that the anti-Islam activist doesn’t do proper research on his causes but instead “just goes home and eats crisps and looks himself up on Twitter”.

In short, the far-right figurehead is essentially making a fortune from harvesting disenfranchised people’s frustration. This is a very dangerous game. Yaxley-Lennon should be ashamed.