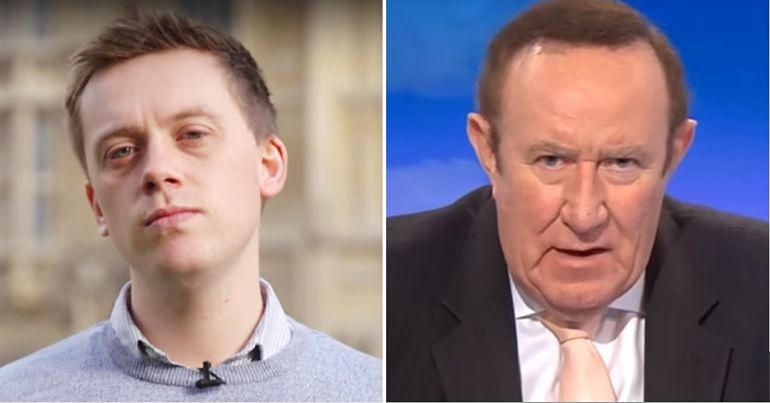 Guardian columnist Owen Jones has launched a scathing attack on the BBC‘s Andrew Neil, calling him out for his links to far-right figures and movements:

Could you please explain why you praised the research of an anti-Muslim and anti-immigrant foundation linked to Orban's far-right government? https://t.co/pVLwnBe64S

Or why you are hosting events at the Hungarian Embassy for this foundation? https://t.co/GMn0Kr6Smj https://t.co/wPm01L3LW1

Liar. Now a blocked liar. For lying. Which is what you do. But not on my twitter line. Keep your lies to yourself. https://t.co/McgEGlUnFH

Yet Jones didn’t let him get away with his forthright response:

Could you please explain why you praised the research of an anti-Muslim and anti-immigrant foundation linked to Orban's far-right government? https://t.co/pVLwnBe64S

Or why you are hosting events at the Hungarian Embassy for this foundation? https://t.co/GMn0Kr6Smj https://t.co/wPm01L3LW1

BBC's Andrew Neil "praised the research" of the Századvég Foundation at the Hungarian Embassy.https://t.co/V4xhQhZuQX

The Foundation produces studies for the far-right Orban government. pic.twitter.com/qZYqh8BecW

It throws a new light on Neil’s criticisms of Jeremy Corbyn attending a Passover ceremony hosted by left-wing group Jewdas:

I’m baffled by this, on two fronts.
1. Why would Mr Corbyn go there, especially after the last couple of weeks?
2. Where do all these nutters come from? https://t.co/CaL78Sp963

Neil is chairman of Press Holdings, which owns the Spectator magazine. Jones did some more digging and discovered a worrying pattern:

Then there's the issue of BBC flagship politics presenter Andrew Neil's Spectator magazine which has published defences of Greek neo-Nazis and Tommy Robinson, a recent article headlined 'In praise of the Wehrmacht', and repeated vicious anti-Muslim hatred. pic.twitter.com/Pto27i35JM

This included more support and links to Orban’s far-right regime:

To be clear. Andrew Neil and The Spectator have worked with a foundation funded by Hungary's Fidesz government, and which is staffed full of former Fidesz officials

Jones felt that Neil’s lack of response to his accusations couldn’t be ignored:

Yesterday, flagship BBC political presenter @afneil accused the journalist @AbiWilks of being a liar after she accused him of links to Hungary's far right.

I posted a thread detailing his links to Hungary's far right. He's said nothing. That is not good enough.

Meanwhile, sociologist Tom Mills made the point that it would be “unimaginable” for the BBC to tolerate similar extremist ties from a left-wing presenter:

Some tweets about Andrew Neil’s links to a far right foundation. Vis-a-vis the BBC, I think @OwenJones84’s original point on this is key: it’s just unimaginable the same would be tolerated from a leftwing presenter.

Why does it matter?

Jones argues that Neil is legitimising the far right and that the taxpayer is paying for it:

Andrew Neil and his Spectator magazine have a demonstrable proven history of legitimising the far right.

Why does that matter? Because he's the BBC's flagship political presenter. Because we pay his wages. And because the far right is on the rise and represents a mortal threat.

Former executive chair of far-right website Breitbart Steve Bannon has been having secret conversations with high-ranking Tory MPs. Far-right supporters of Stephen Yaxley-Lennon (aka Tommy Robinson) have repeatedly used violence to further their cause. And on 4 August, a far-right group attacked a socialist bookshop in London.

So it’s no wonder Jones thinks the far right is at its strongest for a long time:

The far right is now at its strongest in the West since the fall of Adolf Hitler.

If we don't hold the media to account for their legitimisation of the far right, then fascism will consume us all over again.

Neil’s continued presence on the BBC while maintaining such strong links to a far-right regime such as the Hungarian government should worry us all.