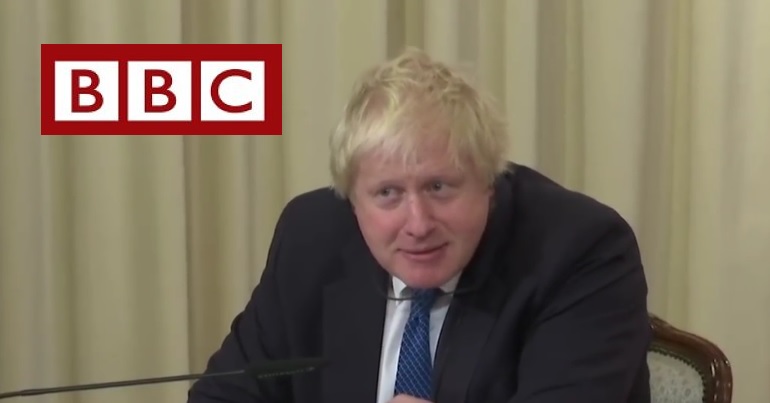 People are accusing the BBC of making a “joke” about Boris Johnson’s Islamophobia. And no one is finding it remotely funny.

BBC Radio 4‘s PM programme reported on Boris Johnson’s attack on women who wear burqas. The Conservative Party chairman has instructed the ex-foreign secretary to apologise after he wrote that the women look like ‘letterboxes’ and ‘bank robbers’. So far, Johnson has refused.

PM, however, took the idiotic decision to report on the story using a ‘clever’ pun. Its presenter said:

Conservatives urge Boris Johnson to draw a veil over his remarks on Muslims.

The broadcaster’s inappropriate wordplay didn’t amuse its listeners, though:

Boris Johnson urged to 'Draw a veil' over Islamophobia in the Conservative Party #bbcpm? Not a great choice of words. Not really a jokey subject is it?

#BBCPM headlines state senior Conservatives have asked Boris Johnson to "draw a veil over" his offensive remarks. Like Johnson, PM's editors seem to think racism and Islamophobia are some kind of joke.

And in light of the media’s coverage of Johnson’s remarks, this extraordinary misjudgement is hardly a surprise.

Following wall-to-wall coverage of accusations lobbed at Jeremy Corbyn over antisemitism, the reporting on Johnson has been striking. Because the ex-foreign secretary clearly made dehumanising and demonising statements about these women based on their religious affiliation. By the International Holocaust Remembrance Alliance’s standards [pdf], and the Labour Party’s, that’s racism.

But the media isn’t describing it as such. The BBC has said elsewhere that Johnson’s comments amount to a “jibe”. Meanwhile, here’s how Newsnight‘s political correspondent described his language:

Boris Johnson is of course known for language that can be colourful but often becomes highly controversial. And I think this is fairly firmly one of those occasions.

“Boris Johnson is of course known for language that can be colourful but often becomes highly controversial,” – says our political correspondent, Alex Forsyth.@AlexForsythBBC | #newsnight pic.twitter.com/BQsv5e736n

Johnson’s remarks, however, aren’t just “controversial”. They’re dangerous. Not only because the racist language may invigorate the already rejuvenated far right further (a far right which Johnson seems to have been courting anyway), but also due to the fact that Islamophobic hate crimes in the UK are surging – against Muslim women in particular.

Despite this, the media is downplaying the problem of Islamophobia in Britain – and its prevalence in the Conservative Party – through its choice of language. It even apparently thinks its okay to have a little “joke” about it from time to time.

– Find out more about Islamophobia in the UK with Tell MAMA.

– Read more from The Canary about Boris Johnson and the BBC.