Children are preparing to revolt for their future. Here's how parents can support them. - Canary 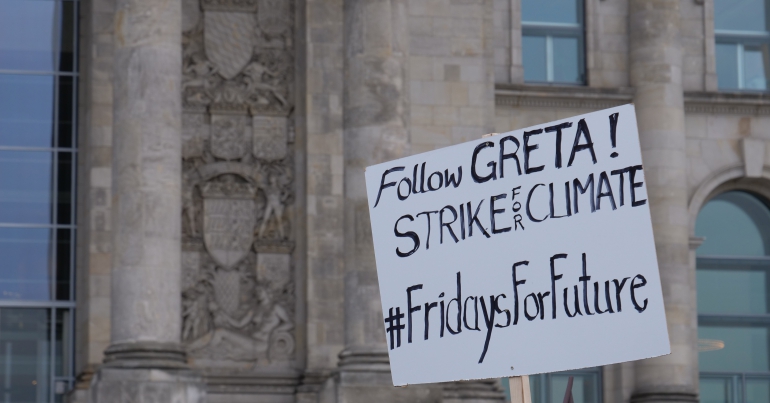 On 15 February, the youth are revolting. Children and young people from over 40 town and cities across the UK are going on strike to protest climate change.

As part of Youth Strike 4 Climate, children will walk out of classrooms to demand action. The campaign is also supporting parents with a template letter they can send to schools to support the striking children.

According to a press release from Youth Strike 4 Climate:

Students are set to go on strike on 15 February and walk out from schools, colleges and universities across the UK over climate change. Driven by an alarming lack of Government leadership on climate action over previous decades, young people are determined to highlight the need for positive change to avert the impending climate breakdown.

The protests are inspired by Greta Thunberg. In August 2018, the 15-year-old Swedish student went on strike outside the parliament building in Stockholm. She handed out leaflets which read:

Anna Taylor from the UK Student Climate Network said that the strike has a “clear message”:

Unless we take positive action, the future’s looking bleak for those of us that have grown up in an era defined by climate change. We’ve had enough and we’re making sure our voice is heard. We’re ready to let politicians know we won’t accept anything less than a commitment to protect the planet for the good of everyone. We have a clear message for Theresa May: do not let the big polluters steal our future.

And Jake Woodier, from the UK Youth Climate Coalition stressed the importance of youth voices:

Youth voices are too often left out of the discussion when it comes to climate change. Our current trajectory is completely incompatible with a clean, safe environment not only for ourselves but future generations as well.

People around the world are already suffering the consequences of climate inaction, with communities, particularly in the Global South, bearing the worst effects, with yet worse to come. Climate change is no longer a problem to be dealt with in the future. The reality is, we’re living through a crisis of humankind’s own doing, and it’s only going to get increasingly worse unless we take radical, rapid action to transition to a low or zero-carbon economy in the immediate future.

Youth Strike 4 Climate has also prepared template letters that parents can use to support their striking children. There are different letters aimed at primary and secondary schools. Both set out clearly why parents support their children and why they’re striking. It says that children can miss school in “exceptional circumstances” and that:

My view is that having only 12 years left to cut CO2 emissions by 50%, as per the latest UN IPCC report, is pretty dire and exceptional circumstances to find ourselves in. And it in this light that I’m giving my child permission.

The letter also sets out that “attending this demonstration will help my child to feel empowered” in dealing with the facts of climate chaos:

a football pitch size of rainforest was destroyed each second in 2017 and is expected to accelerate under [new Brazilian leader] Bolsanaro.

a rubbish truck load of plastic is dumped in the ocean every minute;

since the first UN summit on climate in 1995 the global emissions have risen by 60% and continue to rise.

devastating impacts of extreme weather are in the news on a daily basis.

It points out that as children have “more of their life in the future, rather than the past, it’s they who are most affected by climate breakdown”.

Many other forms of protest have had little impact on the status quo of burning more and more fossil fuels. Nothing like enough is being done by governments throughout the world, including our own UK government.

I respect her decision to attend this protest and I hope and expect you will support her too.