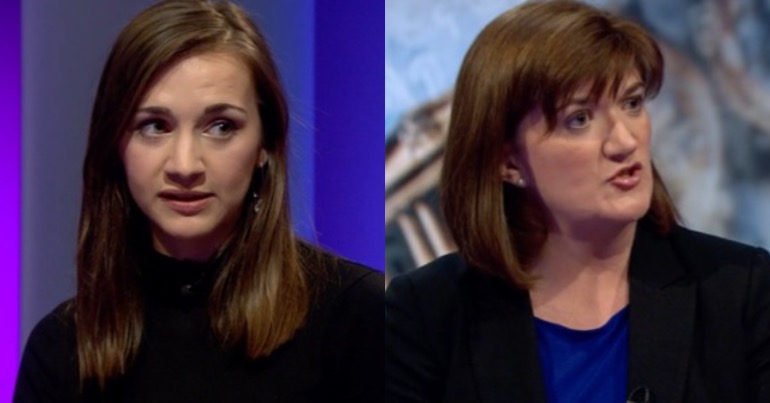 Economics can be a boring subject. But during BBC Newsnight on 11 February, economics commentator Grace Blakeley made it accessible and engaging. And she schooled an ex-Tory minister at the same time.

During a discussion with former education secretary, Nicky Morgan, Blakeley gave her assessment of the failing British economy. This is an economy characterised by very high rates of income and wealth inequality, as well as low-wage, insecure employment. Not to mention low rates of investment in automated and green technologies.

@graceblakeley was absolutely killing it on #Newsnight last night – Grace spoke quickly to get as much in as possible in beteeen interruptions from Maitless. pic.twitter.com/HCRFxWvAMJ

Blakeley listed a significant number of reasons why our economy is failing people specifically. Firstly, austerity, which she said has gone:

too far, too deep, regardless of where you are on the political spectrum.

Many argue that austerity is economically harmful and an ideological choice. It has also inflicted “poverty” and “great misery” on the population, according to Philip Alston, the United Nations Special Rapporteur on extreme poverty and human rights.

Blakeley also acknowledged that during this austerity period:

no one has actually addressed the fact of who’s benefitted from the last ten years of growth.

Moreover, she noted that we have “staggering levels of wealth inequality” and suggested that this helps explain Brexit:

During the discussion, Morgan claimed that low British productivity was “still a bit of a mystery”. But Blakeley appeared to think it was fairly easy to solve. She argued that:

wages are so low that businesses are discouraged from investing in replacing labour with capital, investing in new machinery.

Automated technology, for example, could provide many social benefits if controlled democratically. It would allow the economy to be more productive with less labour and potentially allow more free time from work. However, as Blakeley reasons, there is currently a “massive imbalance in power between labour and bosses”.

Of course, if workers have no power to challenge business it’s problematic. Firstly, because business is not pressured to raise wages in those circumstances. Secondly, as Blakeley says, it creates an incentive for business to maintain cheap human labour, not invest in more technology. And finally, even if businesses do invest in labour-saving technology to boost productivity, there’s a danger they may use this power to cut jobs.

That is why it is so essential that democratic power is radically expanded in the economy so that such decisions benefit all workers, not just a minority of owners. As Blakeley said:

We really need a programme to rebalance power in the economy from those who own the stuff, to those who work it in. And that is not just about tax and spending measures but about democratising ownership, about giving workers a voice in the running of their companies.

She also added an important point about the green elephant in the room:

It’s also about greening our economy over the long term because currently we are massively underestimating the risks associated with climate change and if we don’t deal with that now, that’s going to create economic chaos.

More of the same, please

This isn’t the first time Blakeley has clearly diagnosed the economy’s problems in a way people can understand. In her previous work for the IPPR (Institute for Public Policy Research) she outlined how to reform the UK economy away from finance and banking:

And when appearing on the BBC’s This Week in October 2018 she debunked Tory austerity. She also made the case for government spending to stimulate growth and build public infrastructure:

In a media world so dominated by economic theory preferred by the powerful to justify their power, Blakeley’s intervention is welcome. Let’s hope to see more contributions critiquing a failed economic status quo in the future.