We thought it was impossible. But May just took her Brexit delusion to a dizzying new height. - Canary 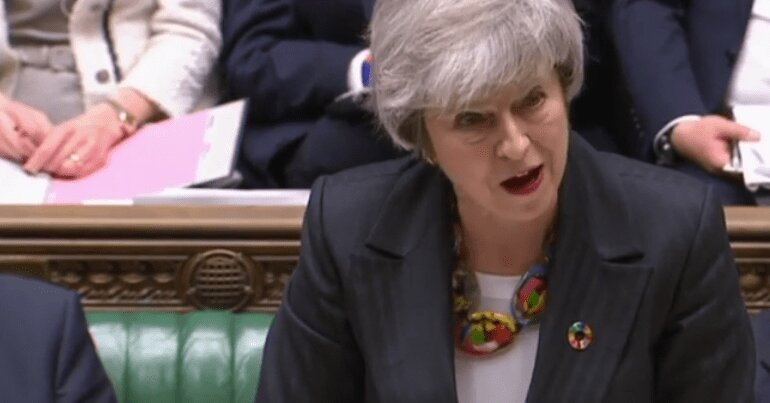 We thought it was impossible. But Theresa May took her Brexit delusion to a dizzying new height in parliament on 12 February.

May denied the accusation that she’s running down the clock towards a ‘no-deal’ Brexit, with the aim of ‘blackmailing’ MPs into backing her deal, saying:

I wanted to have this sorted before Christmas.

The Labour benches erupted at May’s comment. The prime minister pushed back the first parliamentary vote on her deal on 12 December until the 15 January – way past Christmas. To make matters worse, May called off the vote just 12 minutes after Downing Street said it would go ahead, and after parliament had spent days debating the proposal.

But none of that stopped May trying to blame MPs for the lack of progress in the Commons on 12 February. At the same time, the prime minister didn’t rule out pushing the next vote on her deal back to the final week before Britain is due to leave the EU on the 29 March. Corbyn had asked:

We heard from the leader of the house that the next meaningful vote may not happen until after the EU summit on the 21 March, just days before Brexit is due to happen… If… this is not the case can the prime minister tell the house today when the meaningful vote will be?

In response, May claimed she addressed when the vote would be in her statement beforehand. But she wasn’t specific, saying a vote on her deal will happen “when we achieve the progress we need”. The prime minister has already lost the vote on her Brexit deal by the biggest margin in UK history. Still, she’s refusing to compromise with the other parties, instead insisting:

The best way to end uncertainty is to vote for a deal.

In his response to May’s statement, the Labour leader wasn’t happy:

The prime minister continues to recklessly run down the clock. We were promised there would be a deal last October. It didn’t happen. We were promised a meaningful vote on a deal in December. It didn’t happen. We were told to prepare for a further meaningful vote this week, after the prime minister again promised to secure significant and legally binding changes to the backstop. And that hasn’t happened. Now the prime minister comes before the House with more excuses and more delays… What progress has she made on identifying and working up the alternative arrangements?

With that in mind, Corbyn then accused May of “playing for time and playing with peoples’ jobs, our economic security and the future of our industries”. He said that “Labour’s alternative has been widely welcomed as a way of breaking the impasse”. Indeed, EU president Donald Tusk said Labour’s plan is a “promising way” out of the deadlock.

It’s all too clear that the main problem is a divided Conservative party. Under Labour’s conditions, May could likely get a deal through the Commons if she saw off the hard-Brexiteers in her own party and backed a permanent customs union. That would mean trading the hard-Brexit Tory votes for the support of the majority of the 256 Labour MPs.

Instead, May is putting Conservative party unity before a workable compromise. She seems poised to force MPs to choose between her terrible deal and no-deal at the 11th hour. That is a disgrace.