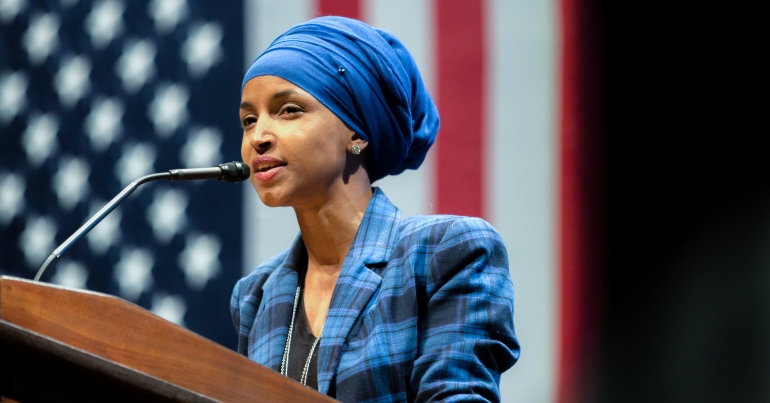 On 10 February, US congress member Ilhan Omar criticised the influence of Israeli lobby group the American Israel Public Affairs Committee (AIPAC) on US politics. And the US political and media establishment quickly drew the line on which issues can and cannot be addressed.

“It’s all about the Benjamins, baby”

Omar is a supporter of the Boycott, Divestment and Sanctions (BDS) movement, and has been a vocal critic of Israel’s actions in Palestine.

Kevin McCarthy, Republican leader in the House of Representatives, likened Omar’s views on Israel to “white supremacy”. He also told the Democratic Party that he would “take action” against Omar if the party refused to do so.

It’s stunning how much time US political leaders spend defending a foreign nation even if it means attacking free speech rights of Americans.

And in response to McCarthy’s threats and Greenwald’s statement, Omar quoted rap artist Puff Daddy by saying “It’s all about the Benjamins [$100 bills] baby”:

It's all about the Benjamins baby 🎶 https://t.co/KatcXJnZLV

Omar then clarified her comments, claiming that suppression of criticism of Israel is directly linked to AIPAC’s influence on US politics:

This shouldn’t be a particularly controversial statement. In fact, as the Intercept reported on 11 February, the pro-Israel lobby itself has been “caught on tape boasting that its money influences Washington”. And in 2005, AIPAC’s then foreign policy director Steve Rosen told pundit Jeffrey Goldberg:

You see this napkin? In twenty-four hours, we could have the signatures of seventy senators on this napkin.

Why, then, within hours, was Omar pressured to issue this apology?

Wide sections of the US political and media establishment responded to Omar’s comments with venom, accusing her of antisemitism. Donald Trump suggested she should resign, saying: “She should be ashamed of herself”.

Please learn how to talk about Jews in a non-anti-Semitic way. Sincerely, American Jews. https://t.co/qo3BU2Pqgn

Co-signed as an American. We should expect all elected officials, regardless of party, and all public figures to not traffic in anti-Semitism.

1. @IlhanMN's outrageous comments equating politicians' support for Israel with being bought off by American Jewish money are a vile anti-Semitic trope. They need to be condemned by all in our party.

The Washington Post, meanwhile, ran with the headline: Ilhan Omar’s tweets were appalling. What happened next was inspiring.

The attacks on Omar weren’t ‘inspiring’, though. They were venomous.

To make things clear, journalist Corey Robin explained the function of a lobby:

Sorry, this New York Jew is not taking instruction about what constitutes anti-Semitism from Kevin McCarthy, Chelsea Clinton, and Nancy Pelosi. pic.twitter.com/Bks7BuNnE2

And that lobby, according to Open Secrets, is spending increasing amounts of money on influencing US politics:

A good resource for factual information about lobbying, candidates, and campaigns is @OpenSecretsDC. You can see here that in 2018 AIPAC spent $3.52 million lobbying, and under "Bills" you can see the specific legislation they work to influence. https://t.co/ZJQst5RAtk pic.twitter.com/HxkknLRPKt

Abby Martin of the Empire Files, meanwhile, outlined how not all lobbying is treated equally:

Remember, it's perfectly fine to talk about NRA bribery or Saudi's huge financial impact in DC, but alleging AIPAC also influences Congress is "anti-semitic." Disgusting character assassination against @IlhanMN for being brave enough to discuss the reality others are terrified to

And journalist Michael Tracey noted how not all political interference is treated equally:

The US political and media class has been obsessed with phantom "Russian influence" boogeymen for the past 2+ years, but the minute you bring up Israeli influence — an actual, established lobby, with financial expenditures and a policy agenda — it's a national scandal. Insanity

He also highlighted the irony of the entire situation:

Maybe the fact that Omar was condemned by the entire House of Representatives in a matter of hours and forced to make a hostage video-style apology validates her comments last night about the power and influence of this particular interest group? Just a wild theory

And the following thread is an account on how AIPAC operates:

A thread on @IlhanMN, anti-semitism, and my personal experience with @AIPAC’s money.

In 2006, I was the first real staffer on a long-shot Democratic Congressional race in deep red Ohio. My boss was a hippie doctor with a lefty perspective on international affairs… (Continued)

Some commentators, meanwhile, suggested that those accusing Omar of antisemitism were doing so in bad faith. Journalist Dan Cohen, for example, had to remind Ungar-Sargon that Israel doesn’t represent all Jewish people:

Israel does not represent all Jews. It’s pathetic that an opinion editor for a major Jewish newspaper either A) doesn’t understand that’s an anti-semitic trope, or B) is advancing the trope to smear a critic of Israel’s over-sized influence in US politics. https://t.co/DaZMSCBIXT

Greenwald also jumped in with an important comment on the power dynamics in Washington:

So a young, exciting, dynamic immigrant – the first black Muslim woman ever elected to Congress – is denounced by her own Party's leadership less than a month after she arrives in DC, due to her criticisms of AIPAC & Israel. Does this say anything about the power dynamic in DC? pic.twitter.com/5objKYFCjl

And in particular, he questioned Clinton’s choice of words:

Yes, interesting: we only know @ChelseaClinton because her mom & dad are famous US politicians. We all know she's American. So what's the rhetorical purpose of this phrase – "as an American" – in the context of her denouncing a Somali-American immigrant? https://t.co/Fi1bSPHYHp

In the US, as in the UK, antisemitism must be confronted wherever it appears. But confusing it with valid criticism of Israel and AIPAC only lightens the term and helps to make antisemitism all-the-more dangerous. Such confusion must stop.