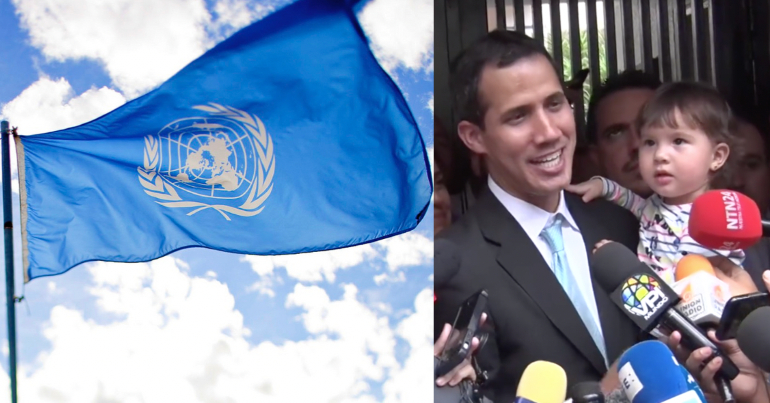 The UN secretary-general has offered to broker a dialogue between the Venezuelan government and opposition. But while the mainstream media has been portraying the Nicolás Maduro’s government as the stubborn party, it seems it’s actually the US-backed and self-declared ‘interim president’ Juan Guaidó who is unwilling to enter into negotiations.

On 11 February, UN secretary-general António Guterres reiterated his willingness to serve as a mediator to resolve Venezuela’s political crisis through dialogue. This followed meetings throughout the weekend with Venezuela’s foreign minister Jorge Arreaza at the UN’s headquarters in New York.

The announcement comes amid growing criticism of the Maduro government from the US and its allies. The Trump administration characterizes it as a ‘dictatorship’ that is stubbornly clinging to power. Administrations officials have called for Maduro to step down or else face intervention, including the possible use of military force.

But according to UN diplomats, the Maduro government has indicated willingness to enter into dialogue, whereas Guaidó’s opposition forces have so far failed to do so.

Growing UN opposition to US stance

The UN has become increasingly critical of the US role in the crisis. In January, it denounced the US sanctions against Venezuela’s state oil company PDVSA. It warned that the measure is more likely to cause suffering to ordinary Venezuelans than the Maduro government – as is usually the case with sanctions.

The UN has also criticized the manner in which the US has been attempting to provide ‘humanitarian aid’. As The Canary has previously reported, there are concerns that the aid might be used as a ruse for less noble motives. And the UN seems to share this view. UN spokesman Stephane Dujarric reportedly stated:

Humanitarian action needs to be independent of political, military, or other objectives.

These concerns seem not to be misplaced. Because there is a historical precedent for such tactics. Elliott Abrams, the newly-appointed ‘US-Venezuela envoy’, used such aid shipments to provide support for right-wing Contras who used terrorism to attempt to topple Nicaragua’s Sandinista government in the 1980s.

Though the US has been successful in getting allied governments in Latin America and Europe to back its regime-change plot, the UN is proving to be a thorn in its side. And along with the governments of Mexico, Uruguay and the Vatican, which have offered to mediate a dialogue between the two sides of Venezuelan politics, the UN is also providing an important force for peace and negotiations.