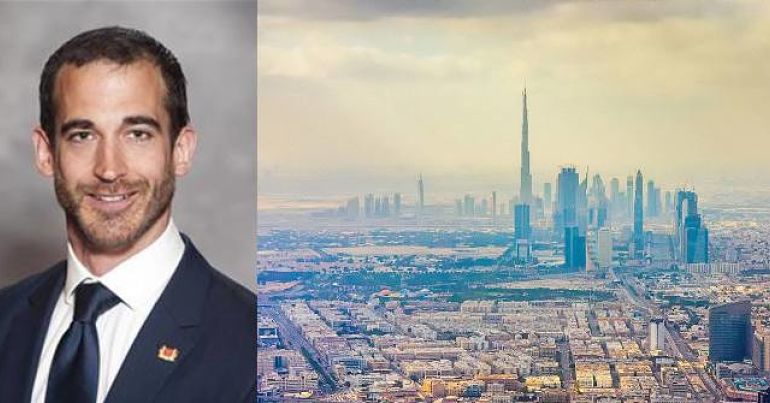 A Scottish Conservative councillor has come under fire after failing to attend any meetings since September 2018. The National reported that Brett Hunt, who represents the Bridge of Don Ward on Aberdeen City Council, currently resides in Dubai. Hunt is on “secondment” as a general manager for the oil and gas company National Oilwell Varco. But the Conservative councillor defended himself, saying he keeps in contact with constituents. The National claimed he was doing so “from the beach”. Hunt has also been sharing images on his social media of him aboard a speedboat and wakeboarding.

According to the Local Government (Scotland) Act, any councillor who does not attend a council meeting for six months loses their position.

“Councillor for the Bridge of Dubai”

The leader of the SNP group on Aberdeen City Council, Stephen Flynn, said Hunt’s constituents have been calling him the “Councillor for the Bridge of Dubai”.

As reported by the National, Flynn also said:

I’ve no doubt that the administration will be making hasty arrangements to jet him back but the people of Aberdeen will be questioning how someone who is reputedly very rarely in the city can seriously vote on the council budget. We all know that exceptions have rightly been made in the past on health grounds to allow councillors to pass the six month period, but I don’t think ‘not being in the city’ will wash its feet as a reasonable excuse.

When you are fortunate enough to get elected to office you must be willing to make sacrifices to do your best by the city, if you aren’t prepared to do that then you should step away.

If Councillor Brett Hunt has any integrity he will resign and let someone who is dedicated to Aberdeen run instead.

I won't hold my breath though… https://t.co/yN5qFCnxAj

Hunt claims that “it’s not uncommon to travel with work” when working in the oil and gas sector. The councillor also said he would be back in the city before the six month deadline was up.

I will, of course, be attending both the budget and the full council meeting in March and I keep in contact regularly with constituents who have issues that I can assist with. Being a councillor is a 5-year commitment and it’s not unusual, as SNP councillor attendance records show, for this to be varied over that time.

Being a councillor is not always a full time job as SNP MSP John Mason reminded the Scottish Parliament last week. Councillor Flynn and a third of the SNP group have second jobs with MPs or MSPs drawing double from the public purse. Councillor Hunt is on secondment with his energy sector job that he had at the time of the election. He will be with us at both the upcoming full council and budget meeting.

A coalition of ex-Labour, independent and Conservative councillors currently runs Aberdeen City Council. The Labour group was suspended from the party after entering into the coalition in May 2017. The group running the council holds 23 of 45 seats. The coalition has just a one-seat majority. If Hunt’s behaviour triggers a by-election, it could risk the current administration losing control of the council.