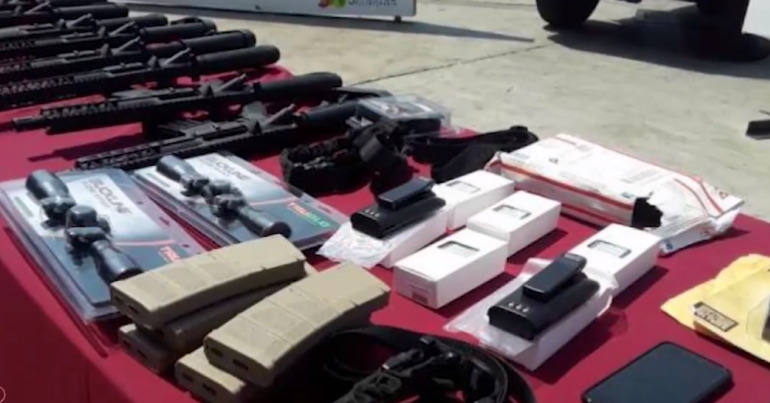 Venezuelan authorities recently claimed to have found weapons aboard a US air freight plane entering the country. In light of recent developments and Washington’s terrible record in Latin America, it looks very much like the US may be up to its old tricks in Venezuela.

Weapons smuggling… made in the US

Venezuelan security officials claimed they had found “19 assault weapons, 118 ammunition cartridges, and 90 military-grade radio antennas, among other items”. And as Democracy Now! reported, this was:

Onboard a US-owned plane that had flown from Miami into Valencia, Venezuela’s third largest city. The Boeing 767 is owned by a company called 21 Air, based in Greensboro North Carolina. The plane had made nearly 40 round trip flights between Miami and spots in Venezuela and Colombia since January 11, which is the day after Venezuelan president Nicolás Maduro was sworn into a second term.

The report continued, referring to the initial coverage of the matter from McClatchy journalist Tim Johnson:

The flights ended after McClatchy first reported on them. Venezuela accused the U.S. government of sending the arms as part of its attempt to topple the Maduro government.

This material was destined for criminal groups and terrorist actions in the country, financed by the fascist extreme right and the government of the United States.

Johnson has further linked 21 Air’s chairman and employees to a company allegedly used during US president George W Bush’s rendition programme. 21 Air has denied knowledge of any arms shipments.

Elliott Abrams: up to his old tricks?

As The Canary reported on 8 February, the man in charge of “efforts to restore democracy” in Venezuela – Elliott Abrams – has a history of covertly smuggling arms to Latin American coup-plotters. During the 1980s, Abrams was a “key figure in exploiting ‘humanitarian aid’ programmes to wage covert warfare” against Nicaragua’s left-wing Sandinista government. He’s also a long-time fellow and member of the Council on Foreign Relations (CFR), a US thinktank whose representatives have acknowledged that sanctions on Venezuela are designed to “make the economy scream”.

Abrams met with co-founder of Venezuela’s Popular Will party (now leading the coup attempt under Juan Guaidó) David Smolanksy on 26 January. As the Grayzone reported, Popular Will has faced accusations of responsibility for “the deaths of police officers and common citizens alike” in the country.

Anti-war figures in the US like Jill Stein are rightly worried about ongoing US interference in Venezuela as a result:

Still think US is intervening for democracy & human rights?

It seems very much like Abrams and the US government are up to their old tricks. And that makes it all the more important that anyone interested in peace and democracy speaks out at every turn against further interference.