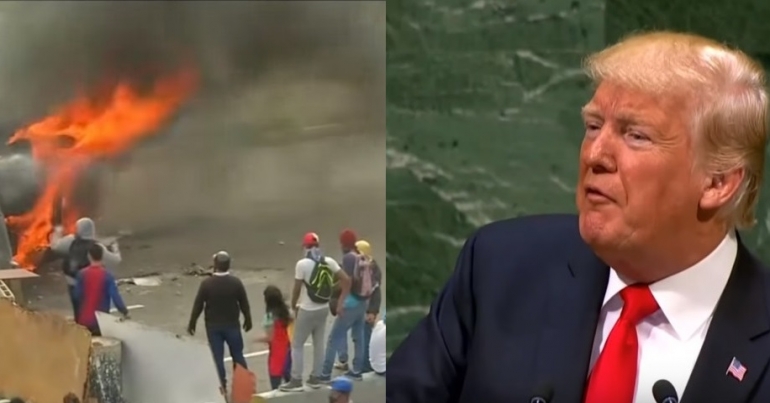 The US-based Council on Foreign Relations (CFR) recently recorded a conference call during which “experts” discussed the “evolving crisis in Venezuela”. Shannon O’Neil is one of two CFR experts who offered her insights on 30 January 2019. And she made an important admission about US sanctions on Venezuela that the corporate press consistently ‘overlook’.

The “most powerful private organisation”

As The Canary has previously reported, one historian has described the CFR as:

the most powerful private organisation in the United States – and therefore in world history.

Former US secretary of state Hillary Clinton once told the CFR:

[I]t’s good to have an outpost of the Council right here down the street from the State Department. We get a lot of advice from the Council, so this will mean I won’t have as far to go to be told what we should be doing and how we should think about the future.

Questions were submitted from business figures such as William Skidmore, senior geopolitical adviser at BP.

Skidmore asked how the effects of the sanctions on Venezuela may be used to ‘cast aspersions’ on Juan Guaidó, the opposition politician who recently declared himself “interim president” with Western support.

O’Neil first dismissed the argument that sanctions have played a key role in the economic woes of the country. She said:

You will hear that this is all Guaidó’s fault, that the U.S. imperialists are working with the opposition and they’re trying to bring us down, and the reason that you don’t have eggs in your refrigerator is because of their political—or their economic pressures, and now their sanctions… I think other people are quite realistic about what has happened about the mismanagement, about the corruption of the regime, about the police that are firing on them. (Laughs.) I don’t think Venezuelans are—you know, they know where the reality is.

With more sanctions, there’ll be “more deprivation” and “more refugees”

But O’Neil immediately followed on by saying:

One thing, though, as we see sanctions tighten… it’ll be more expensive for Venezuela to send their oil to Indian refineries, as compared to Louisiana refineries. (Laughs.) And so there will be costs there. And some of it… will be much harder to do. As there’s less money, I do think you’ll see more deprivation, even given the low base we’re at, more among the population. And I think you’ll see more people leave Venezuela. So you’re going to see more refugees pouring into countries throughout the hemisphere and elsewhere around the world.

And then, almost as though she hadn’t said what she’d just said, she said:

I don’t see this as an easy blame on Guaidó. I think Venezuelans are pretty clear about where the challenges come from.

“Expert” O’Neil may not be aware of extensive polling done in Venezuela on this subject. And according to an October 2018 survey:

So it seems Venezuelans are indeed “pretty clear” about the challenges they face.

Earlier on, O’Neil had already said that US sanctions resulted in “a lot less money coming in”. She then made crystal clear the actual purpose of the sanctions. Far from ‘promoting democracy’, she said:

On 1 February, a former UN expert went further, saying “sanctions [on Venezuela] kill”. This confirms what author Tariq Ali told The Canary when he said sanctions on Venezuela have “nothing to do with democracy”; a fact repeated by numerous peace activists and others.

Although experts often couch their rhetoric in the language of “human rights” and “democracy”, every now and then, a bit of truth seeps through.