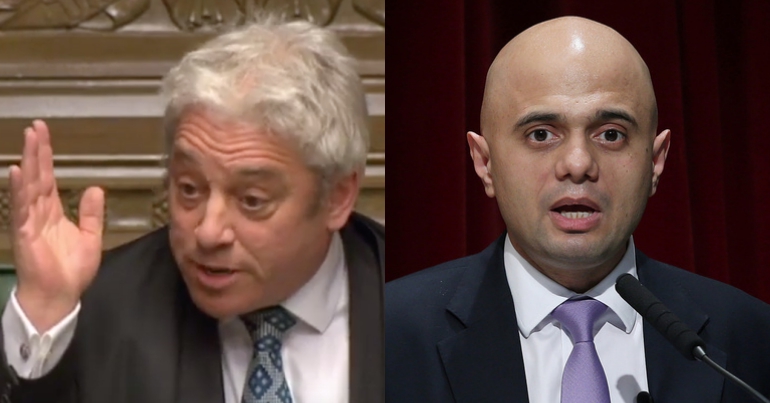 On 31 January, home secretary Sajid Javid announced his plans to tackle knife crime through introducing “knife crime prevention orders” (KCPOs). But a small matter escaped Javid’s notice when he made his proclamations. He forgot to tell parliament, and then failed to turn up to answer an urgent question about the issue.

The speaker, John Bercow, was less than impressed by Javid’s oversight.

Labour MP Vernon Coaker raised the question on 4 February to find out “further details on the Government’s plans” on KCPOs. Coaker also criticised Javid for not attending. Bercow agreed, saying:

Let it be crystal clear that the secretary of state for the home department should be in this chamber answering this urgent question.

But Bercow went even further, slamming Javid for not making a statement in the first place:

For him to fail to be in the chamber on Thursday to make a statement about his new anti-knife crime initiative was at best ill-judged and at worst rank discourteous to the House of Commons.

Bercow didn’t stop there. He continued to tear apart Javid’s priorities, saying that if he:

found time to brief or to ensure that others briefed the newspapers on his behalf and he managed to scuttle off to do a radio interview and then to pop up on the Andrew Marr show yesterday to give viewers and the nation the benefit of his views, the right honourable gentleman should have been here.

But even that wasn’t enough for Bercow. He continued laying into Javid:

If the secretary of state for the home department aspires to something a little more elevated than to be a jobbing functionary of the executive branch, and wants to be a serious and respected parliamentarian, he has to develop… respect for the rights of the House of Commons.

Bercow then labelled his absence “ill-judged and rude” before concluding:

It really is time that he upped his game.

Javid appears to be more concerned with headline-grabbing than actually tackling knife crime. His new proposals are tabloid fodder, but are seriously flawed. It is a draconian piece of proposed legislation that could impose severe restrictions on children’s lives with the threat of two years in jail should they fail to keep to the conditions. Even the justice secretary thinks its a bad idea.

Bercow’s comments say it all. It really is time the home secretary “upped his game”.